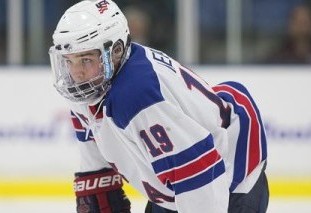 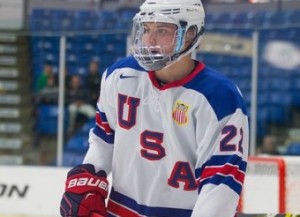 New York (The Draft Analyst) — One was born and reared in an established hockey hotbed, the other in a market that up untl recently was still somewhat fledgling. One was fortunate enough to be raised by an NHL all star while the other was mentored by one.

Years later, left wing Kieffer Bellows and center Clayton Keller are linemates on the U.S. National Team Development Program, forming one of amateur hockey’s most potent duos as they move closer towards expected selections in the first round of the NHL’s 2016 draft.

Bellows, a native Minnesotan, is what you would classify as an assertive power winger with a hunter’s mentality and a shot lethal enough to be used from any area within the offensive zone. He plays a similar style to his father Brian Bellows, the former Minnesota North Stars forward who went on to score 485 goals over 17 NHL seasons.

Keller honed his electrifying offensive skills growing up in Swansea, Ill., a St. Louis suburb about 15 miles east of where a critical figure in his development starred for the Blues. Keith Tkachuk, who was an assistant coach on Keller’s AAA team, spent half of his 18 NHL seasons in St. Louis and remained in the area after he retired in 2010.

Both Bellows and Keller are considered perhaps the best players on the NTDP’s Under-18 program, which is partly affiliated with the United States Hockey League and runs its talented roster through a gauntlet of league, college and international competition from September to April. The duo has played together since the start of the season, and the results seem to back up a sort of chemistry that was evident from the onset. While Keller leads the club with 46 assists and 71 points, Bellows has potted a team-best 28 goals in just 38 games.

“Playing with Clayton is something special,” Bellows told the Plymouth Observer last month. “He’s a great player, great person off the ice, too.”

Along with NTDP alumni Auston Matthews and Matt Tkachuk, they represent yet another strong crop of draft-eligible American prospects. Both Matthews and Tkachuk — two forwards expected to be top five picks in 2016 — played with Keller on Team USA’s gold medal-winning entry at last year’s Under-18 World Championship. Regardless of whom gets drafted where, the hype surrounding Keller and Bellows has been building. Keller has been piling up points — almost two per game — as he’s coming close to duplicating what Matthews did statistically last year, and is just 17 assists away from setting a single-season NTDP record. Bellows finished third in the USHL with 33 goals last year, and is on pace this season for 49, which would be the NTDP’s third highest single-season total behind Matthews’ 2015 record of 55.

Could either player be classified as a prospect with franchise-changing potential? In a draft that we consider both Keller and Bellows to be in the upper tier of a somewhat top heavy pool of amateurs, the possibility exists. Keller, who stands 5’10 and weighs close to 170 pounds but likes to involve himself in corner play, consistently displays game-changing skills, even against older and physically mature defenders from the college ranks. Bellows is a bit sturdier with a well-built 5’11, 200 pound-frame he uses to win puck battles and tire out opponents. Their weaving and dipsy-doodling inside the opposing zone, reminiscent of what you’d expect to see from seasoned NHL’ers, has a dizzying effect on their peers. Keller is a magician within tight quarters, searching for second and third options when his first look is covered. Bellows will hammer away at enemy defenders with punishing hits while simultaneously controlling the puck and finding the open man.

Differing opinions on when the two forwards will be drafted are likely to end up somewhat unified, especially with April’s U18 Worlds taking place a few months before draft day. In a year where Matthews is the consensus top pick , the general belief is that Keller could get picked somewhere in the draft lottery’s latter stage — somewhere between picks eight and 13. The Draft Analyst ranked Keller 11th and Bellows 16th in their January rankings of the top draft-eligible prospects.