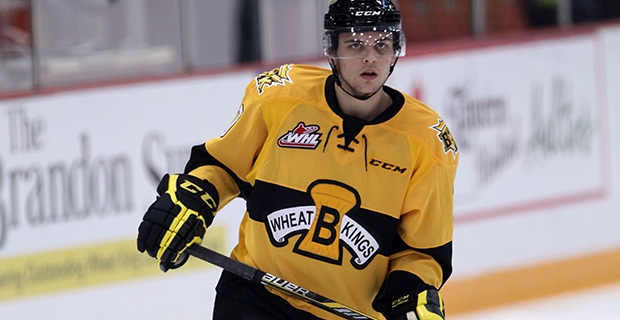 A wiry two-way blueliner with quickness and an exceptional understanding of his position, Clague had a strong enough second half to finish among the WHL’s top scoring draft-eligible rearguards. Even more impressive is that he did so without the benefit of logging big minutes, as he took a back seat to older prospects Ivan Provorov and Macoy Erkamps. The Wheaties may be a stacked team, but there were periods when Clague was the back end’s calming presence, a telling sign about his upside. He can break out with hard, accurate stretch passes or a smooth, calculated rush up ice. Clague’s stick is always in the right position, and he’s quick and decisive on his reads. His hands are soft enough to deaden an errant pass and whip a strike up the ice to a counter-attacking teammate.

Clague’s point totals can be viewed in two ways – either they were somewhat inflated via playing top big minutes with powerhouse Brandon, or the fact that 26 of his 37 assists were secondary says more about his quality breakouts than his playmaking abilities. He does have a hard shot and likes to sneak away from traffic to whip one on net, but he’s also astute at the slap and touch passes. At 170 pounds, Clague needs to hit the gym, but keep in mind his lean physique keeps him agile and elusive. Board play defense consists of little physicality and a heavy dose of pushing, shoving and stick thrusting, and he’s smart enough to avoid tripping minors. Clague, however, can be undisciplined with his lance – most of the minors he’s whistled for are stick infractions like high-sticking, slashes and cross-checks.