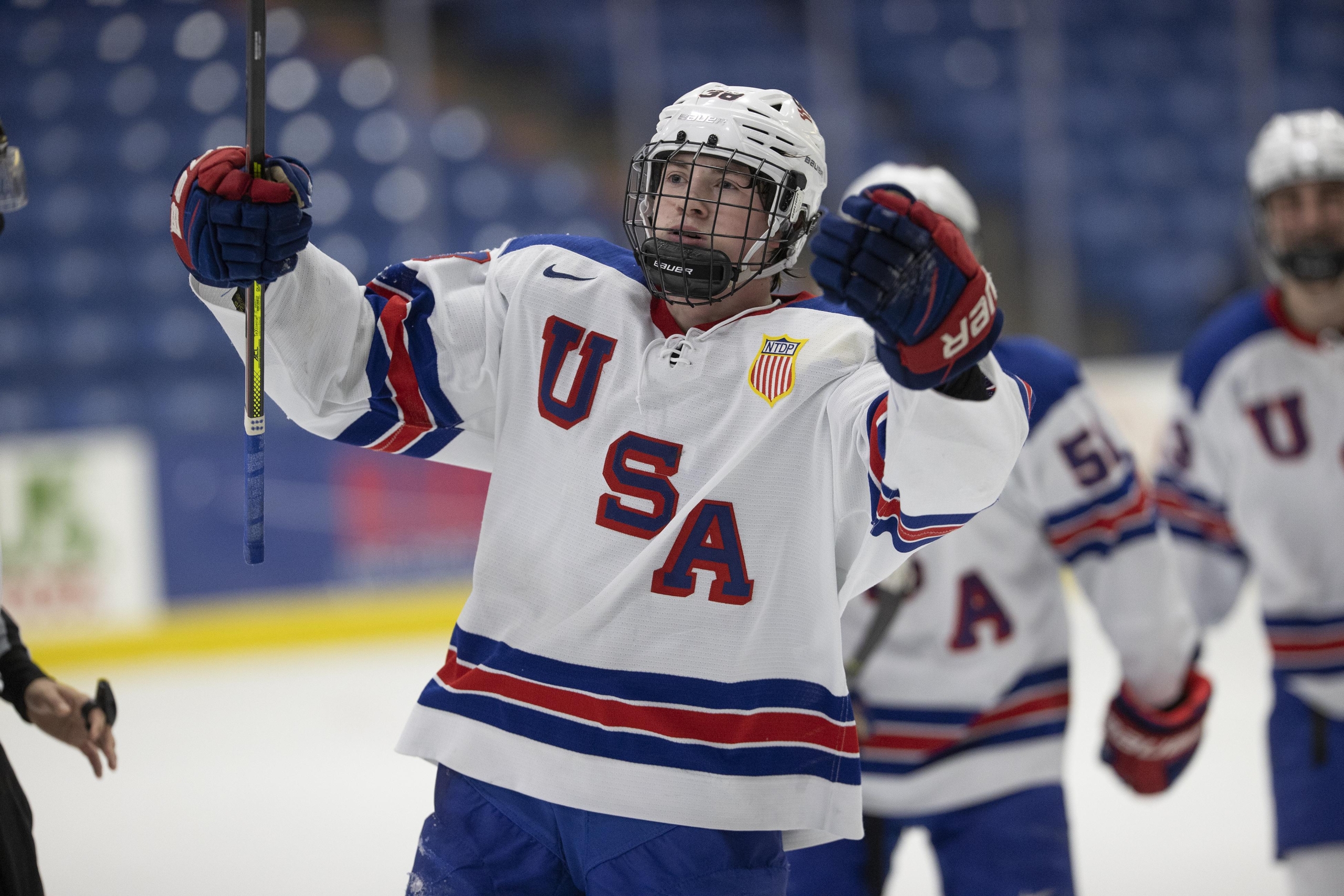 A born-and-raised Pittsburgher who grew up a short drive from PPG Paints Arena, Cooley is a safe bet to be the first American picked in the 2022 NHL draft. He was one of several players from last year’s under-17 NTDP who were hastily promoted to the U18’s after a rash of injuries, and Cooley wasted little time establishing himself as an excitable two-way line driver who matched the production of the program’s older forwards. He stayed close to home for his local development, starring for the Pittsburgh Penguins Elite U14-U16 clubs between 2018 and 2020, and he certainly earned his spot with the NTDP as one of the best U.S.-born prospects from the 2004 birth year. Cooley’s impact on the loaded squad was instant; not only for his top-line role and production but also for his confidence and hard-working attitude. By mid-February, Cooley was promoted to the U18 team for good, and finished last season by leading all 2004-born NTDP’ers in scoring with 14 points in 19 games, including three assists in six games for Team USA at the U18 world championship.

Nov. 27, 2021: Although it’s hard to classify any trio featured in this year’s version of the NTDP as a “top line”, Cooley is in fact the nominal first-line center, and he appears to be the target of choice for point man Lane Hutson as Cooley mans the right half wall on the lead power-play unit. What makes both roles significant is that Cooley is one of six U18 NTDP’ers averaging over a point per game, so it isn’t like he doesn’t have competition for the plumb situations. He then takes it one step further by not only earning top-center minutes, but also producing like one at both even strength and the power play. Stats-wise, Cooley — who since November has averaged over 20 minutes a game according to InStat Hockey — has led the squad in scoring throughout. Most of his 28 points (13 goals, 15 assists) aren’t freebies, and he’s got a bunch of secondary assists that were prettier than the primary. Cooley added another draft-year feather in his cap earlier this month by being the top scorer (7 points in 4 games) at the U18 Five Nations Tournament, which was dominated by Team USA in a four-game sweep.  His scoring rate has been consistent against his junior-age peers in both the USHL (8 points in 6 games) and international play (7 points in 4 games). But Cooley’s production against older NCAA competition is almost double (13 points in 8 games) what it is against teenagers. He’s registered a point in all eight matches against college teams, including a current seven-game goal streak which began on Oct. 3 with a 4-3 win at then-No. 18 Notre Dame.

Cooley is an elite skater who moves with a purpose at all times, and his explosiveness is just as effective at penetrating an opponent’s neutral- and grey-zone defenses as it is when he’s controlling possession deliberately in the offensive end.  Cooley’s first step can be a difference maker, and kiss him goodbye if he’s already accelerated into his third or fourth stride. It’s hard to quantify how strong Cooley’s balance is, but he makes it look easy off the cycle as he curls inside with a harassing checker draped over his back. At 5-foot-10, Cooley can be impossible to knock off the puck. There’s noticeable body control and fluidity when Cooley is operating on his outside edges and wheeling around the net and into the circle on his backhand, almost in a Mathew Barzal kind of way. It’s common to see reliable junior-age and college-level defenders either retreat deep inside their zone or scramble in disarray once Cooley’s already breached the belt of neutral-zone coverage. But it’s also the subtle things he does with the puck over short distances — chips, saucers, banks — that helps reinforce his reputation as an elite stickhandler and puck distributor.

Cooley is a strong and energetic pivot who handles top-line duties without a hitch. He is a matchup nightmare for opposing coaches for several reasons, but it’s his arsenal of elite puck skills that helps him stand out among the NTDP’s star-studded cast. Although his high-end skating ability plays a critical role in possession driving and shot generation, Cooley from a standstill is equally as dangerous and should be marked with great caution. He repeatedly attacks and exploits openings of all sizes against the toughest defenses, and Cooley’s decision making — whether shift-to-shift or game-to-game — keeps making competent rearguards look stolid and indecisive. Although Cooley often assumes significant risk with his passes, he is an accurate setup man whose deliveries can be of the highlight-reel variety, especially off the rush. It’s one thing for Cooley to thread no-lookers which stickhandling into the teeth of coverage (which he does frequently), but doing so at top speed is something only the special prospects can execute against top-level competition. His shot is a major weapon, especially on the power play, as the NTDP has set plays that culminate with the left-shot Cooley delivering hammer blows from the right circle.

Cooley is a hard worker and aggressive forechecker who adapts quickly to the pace or nature of a game. Older NCAA opponents have tried to intimidate him with physicality but the effects are usually negligible. His energy and peskiness seem to annoy defenders, and Cooley draws a good number of penalties from his play off the puck. Although he’s not the NTDP’s lead penalty killer, Cooley is used while down a man and is a short-handed scoring threat even when summoned to take key defensive-zone draws. According to InStat Hockey, Cooley won over 65 percent of his draws (67-for-103) in a current stretch that dates back to mid-October, and he usually is on the ice for all late-close situations.

Of the premier 2022 draft prospects who are considered to be the most innovative for their decision making on the puck, it is Cooley who is roundly lauded as the most cerebral among those raised and trained in the United States. There is nothing enigmatic about his game, and Cooley has a penchant for creating scoring chances from scenarios most would deem untenable. The best way to understand or appreciate his craftiness is by observing the manner in which Cooley enters the offensive zone and how he utilizes all four members of his on-ice support to create quality scoring chances from any spot in opposing territory. He’s poised, mature, calculated, and inventive.