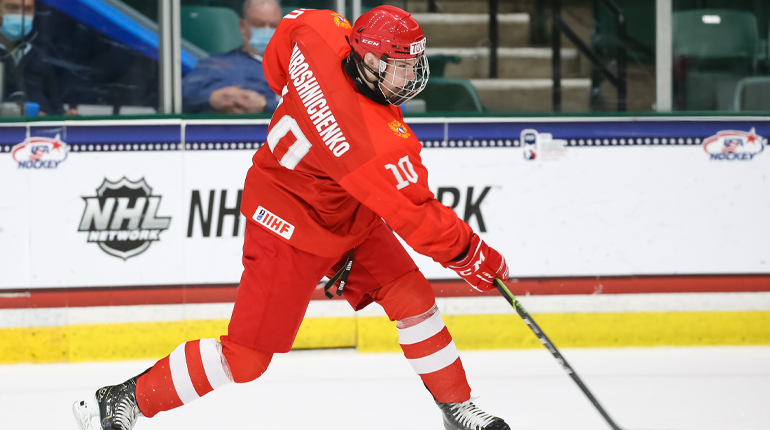 You won’t find many coaches who would purposely keep a hard-hitting goal scorer out of the lineup, which is why power forwards remain coveted assets well after they embodied the suffocating, crash-and-bang style of the Dead Puck Era. Every year, at least one sizable forward with skill will occupy the top spot (or very close to it) on a GM’s wish list. Whether acquired via trade, signed during free agency, or plucked from the tree on draft day, the power forward and his on-ice omnipresence can be a tide turner, and an even deadlier weapon if they know how to score. No such type within this draft class combines strength and skill as effectively as Miroshnichenko, a bull of a young man who has delivered results at every level.

Miroshnichenko, a right shot who plays mostly on left wing, plays what is colloquially knows as a North American style — a physical, north-south brand of hockey involving punishing, tireless play off the puck followed by quick, decisive counterattacks that keep the opposition hemmed in their own end. He was impressive in his 16-year-old season with Omskie Yastreby in the junior-age MHL, recording 15 points in 20 and playing 20 minutes a game by season’s end. Where Miroshnichenko made the most noise during his young career has been at international tournaments, where ‘s been a critical piece to Russian success at events such as the 2020 Youth Olympic Games, where he netted a hat trick in a semifinal win over Finland while playing on the top line with Matvei Michkov and center Ilya Kvochko. In May, 2021, Miroshnichenko helped guide Russia to a silver medal at the under-18 world championship with six goals and eight points in seven games, and he was nearly unstoppable at the 2021 under-18 Ivan Hlinka tournament, where Russia took home gold. Expect Miroshnichenko to not only go high in the first round of the 2022 draft, but continue to represent Russia at prominent international competitions over the next decade and beyond.

Nov. 15, 2022: Miroshnichenko was dominant in helping Russia win gold last August at the Ivan Hlinka tournament. He tied for fourth in scoring with nine points (four goals, five assists) in five games, including a two-goal effort in a 7-2 romp over Slovakia in the championship game. With enough MHL experience from the previous season and multiple impressive showings in international play, Miroshnichenko at 17 years old was ripe to play his draft season with one of Omsk’s men’s teams in either the second-division Supreme Hockey League (VHL) or the KHL. Miroshnichenko suited up for the former since Omskie Krylia had plenty of openings in what was expected to be a rebuilding season for one of the league’s younger lineups.

The early season was kind to both Omskie Krylia and Miroshnichenko, whose promising start included three goals and two assists in his first eight games. He quickly found himself playing top-six minutes, including action on the first power-play unit, and although Miroshnichenko’s overall production was moderate by league standards, he did rank among the team leaders in goals despite being one of the VHL’s youngest skaters. He would later join Team Russia’s entry at the under-20 Four Nations tournament in Angelholm, Sweden, where he scored a goal and assisted on another in three games.

Jan. 20, 2022: Miroshnichenko has handled the ups and down from Omskie Krylia’s lost season without showing traces of selfishness or defeatism in his play. It’s doubtful he’ll completely eliminate floating from his off-the-puck tendencies, but it’s not as though Miroshnichenko doesn’t work hard or chooses against sacrificing his body. He was invited to Russia’s world juniors’ camp without much of a chance to make the final roster, but it’s fair to say his age played a bigger role in his omission than his actual play. Nevertheless, Miroshnichenko rejoined Omskie Krylia in late December and has played his best hockey of the regular season over a nine-game stretch in which he registered six goals and an assist. He remained on the top line with Dmitry Sokolov on the opposite flank.

If skating is to be judged on areas such as top speed, acceleration, balance, and agility, then Miroshnichenko certainly belongs in the conversation for best skater in the draft. And that doesn’t mean relative to his size or position, as in, he’s the best-skating power forward available. Simply put, Miroshnichenko is a high-end skater in comparison to any position player regardless of age; one with an explosive gear that is exactly that — explosive. He continues to trouble defensemen off the rush, and often it will require a double team to remove Miroshnichenko completely from the puck. Defenders in 1-on-1 situations must make textbook plays to stop him or run the risk of being posterized. Their slightest hesitation or lunge instantly tips the scales in Miroshnichenko’s favor, and he’ll gladly exploit any open lane to the net. Breakaways or odd-man rushes involving him are commonplace, and opponents who can actually keep pace are then subjected to Miroshnichenko’s superior puck protection via stiff shoulders and a series of close-quarter escape moves. He also is a poised puck possessor and distributor from the wall, using bank or touch passes to transition his line into their cycle.

Miroshnichenko has delivered more than a fair share of pretty passes, and in big moments no less. But what he really loves to do is shoot the puck, and shoot it he most certainly will. Playing on a top line with a trigger-happy winger such as Dmitry Sokolov doesn’t guarantee Miroshnichenko will get the premium looks every shift. But he’s perfecting his ability to create shots for himself, such as screen shots through legs in one-on-one situations, and also sneaking into high-danger areas for first dibs on a juicy rebound without the threat of harassment. This could explain an uptick in his shot generation to nearly four shots a game during a lengthy midseason stretch.

Miroshnichenko’s slapper is a legitimate threat that he’ll use from the circle or off the rush. As a right shot playing the left wing, Miroshnichenko also gets to show off his bulldozing skills when he takes the puck to the net on his backhand. He usually sticks to the shortest routes possible regardless of whether he’s checked or not, and Miroshnichenko is agile enough to stop short of the goal on his heels before executing for a nifty fake for a tuck-in attempt. He’s also a dangler who is effective in shootouts and has beaten goalies with a variety of moves from different shooting angles.

Intimidation, whether intended or simply by circumstance, can play a critical role in Miroshnichenko’s ability to take over a game. He can be a menacing hitter in open ice, and few draft prospects, if any, will finish their checks with as much authority. Although Miroshnichenko doesn’t kill penalties at the VHL level, he is a physical nuisance on the forecheck, which is when you really get to see the panic he causes for opposing defenseman. Using a combination of speed and anticipation, Miroshnichenko will either pressure a defender behind his net or violently interdict him before the zone is excited. The downside to this sort of “high-motor effort” is that it can burn Miroshnichenko out for the second halves of shifts, which then results in longer stretches of standing around and puck watching. Still, Miroshnichenko definitely plays with purpose and is one of Omskie Krylia’s hardest workers on any given night.

Being imaginative and poised during pressure situations are behaviors more common with today’s larger forwards than in previous generations, so it shouldn’t be at all surprising seeing this thick 6-foot-1, 185-pound winger dangle a defenseman or saucer backhanders across the seam. Miroshnichenko’s overall decision making involves 360-degree vision, timely reads, keen anticipation, proper positioning, and timing plays; all advanced enough to not only drive his own line but also establish a standard any teammate should follow. He consistently finds seams, opens lanes, threads needles, and picks corners. Breakaway opportunities are frequent, and they don’t happen simply by chance. Miroshnichenko, who easily manipulated the less-structured defenses in junior hockey, now outfoxes mature veteran blueliners who are late to sense the possession change.