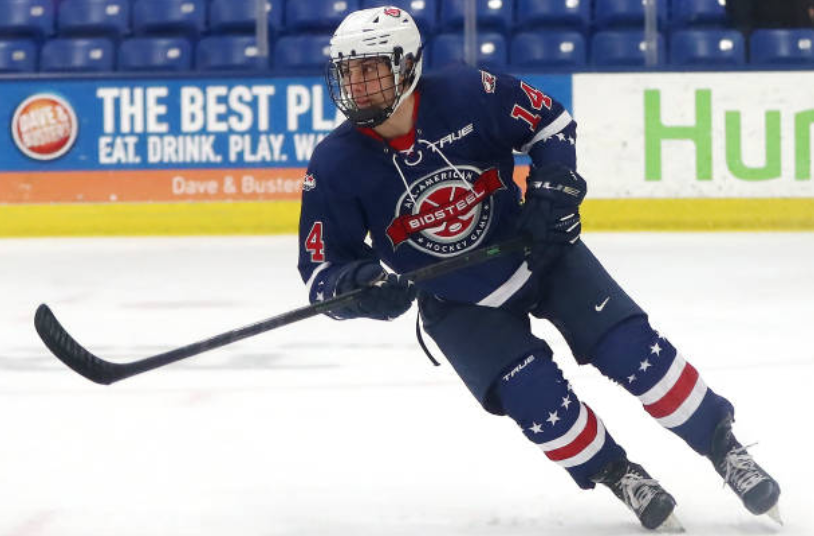 A possession-driving center with high-level speed and smarts, Nazar is a Michigan native who has wowed many an observer since joining the U.S. NTDP. Committed to the University of Michigan, Nazar III has been a leading point producer, power-play specialist, penalty killer, and overall problem solver in each of his two seasons with the program, and it’s next to impossible for a player with his skills to not standout on a nightly basis. He starred for Honeybaked and Little Caesars minor midget teams and played for Team USA at multiple international tournaments, including the 2020 Winter Youth Olympics where Nazar and the Americans took home the silver medal.

Nov. 10, 2022: Nazar’s line is the nominal second line behind Logan Cooley, but the production between the two trios is nearly identical, as were his numbers with linemate Isaac Howard. Although the NTDP rolls four lines with top-six quality depth on their checking units, Nazar plays a lot and can be considered one of the more valuable pieces for a team loaded with elite skill at every position. He suffered through a goal-scoring funk against mostly NCAA opponents, but Nazar quickly recovered with the smashing of international opponents at the under-18 Five Nations tournament in early November. He finished with six points (two goals, four assists) in Team USA’s four-game sweep, netting the eventual game winner in a romp over Finland and opening the scoring in a blowout over Switzerland.

March, 13, 2022: Nazar remained one of the NTDP’s leading scorers (tied for first in points with Isaac Howard) and a special teams stalwart well after the new year, but he’s increased his goal scoring significantly since the 11-game goal drought that began in early October. Eighteen of Nazar’s 23 goals were scored in his last 28 games after he had only five in his first 15, and he delivered strikes against premier NCAA programs such as Minnesota, Michigan, and Providence. The NTDP’s college schedule is complete, and Nazar in 19 games posted nearly a point-per-game scoring average with 16 points (six goals, 10 assists) to help the NTDP post a 12-7-0 record against some of the best collegiate programs in the nation. He also played in the All-American Prospects Game on Jan. 17 and should feature prominently as the NTDP gears up for the under-18 world championship in Germany in late April.

There are plenty of speed merchant’s on this year’s NTDP, with Nazar being one of their smoothest. As early as his initial shifts, Nazar will send a message by slicing right through neutral-zone traffic then exploding to the inside or out for a direct assault towards the net. Opponents from three ascending levels of competition — the USHL, international tournaments, and the NCAA — had trouble containing him, with college defensemen, several whom already were drafted into the NHL, struggling the most. Elite speed, edgework, and balance aside, Nazar also effortlessly dips his way out of jams along the wall with his head up, with the danger of a bullet seam pass being as high as a straight-line attack towards the goal.

Nazar is a involved competitor who reacts to the puck’s every move. Staying in constant motion makes Nazar next to impossible to contain, especially once the afterburners are turned on. Exploding from a standstill makes him the quintessential breakaway threat because he has pure speed and keen anticipation. He needs only two or three strides to reach top speed, and Nazar’s glide on several occasions ended up outpacing the defender who was legging it out. Being blessed with quick hands and feet can come in handy when Nazar is pressuring the puck before ultimately stealing it to begin precision cycle execution.

Nazar may come across as a pass-first center but it doesn’t take long to see the opposite. Not that Nazar behaves like he might favor goal scoring over playmaking — he’s simply a dual threat whose high IQ allows him to immediately adjust his method of engagement based on the on-ice conditions he’s presented with. Either way, Nazar is worth the price of admission, as he’s usually good for at least two or three exciting plays before the end of the opening period (it’s been that kind of season for his NTDP). He can create his own shot (usually a wrister) from an inside move or opt for the ankle-breaking jukes to get him closer to the goal.

Calling Nazar a “puck wizard” may be a colloquial way to say that he exudes pure skill and offense, but he validates it with agile displays of keep-away, spin moves, and no-look passes. These flashy (and often effective) displays of creativity can come quick and in bunches, and several NCAA play-by-play announcers getting their first look at Nazar have marveled at his puck skills. Nazar is a brilliant passer with vision that can catch the entire five-man unit snoozing. His scanning radius is far too wide for any opponent to cover entirely, which also can work to his benefit in the shooting department. He can fit a puck anywhere he wants and look comfortable from his forehand or backhand. Like most high-end scorers at this age, Nazar can be guilty of forcing pucks into danger areas and stubbornly attempt to slice through collapsing defenses instead of chipping pucks deep. But risk taking is unavoidable when a center’s job is to create offense, and Nazar deserves credit for keeping his unforced errors to a minimum.

Nazar ‘s 200-foot play and multi-situational usage makes him by definition a two-way forward. He is used on the penalty kill (including the big ones) and is a legitimate short-handed threat. On faceoffs, Nazar has been operating at or above 50 for most of the season but has delivered at least a dozen 60-percent performances and only a few games of under 40 percent. Competing hard, keeping an active stick, pressuring the points, battling in corners, and covering the low slot are only some of Nazar’s contributions towards the NTDP’s collective defensive effort. He may act like a puck hound but there’s definitely more structure and strategy driving Mazar’s defensive game than the average energy forward.

The NTDP’s college schedule can include anywhere from 15 to 20 NCAA programs, most of which are Division I and have an average age of 21 or 22 years old. Nazar being on the smaller side would make him seem like an easy target for an older big-bodied NCAA defenseman, but he’s been both productive and clutch in the face of such physical opponents. He’s competed hard against enough larger players to alleviate any concerns that Nazar needs to bulk up in order to hang against tougher and physically-mature opponents.

It’s almost unthinkable that any scout can watch Nazar and not appreciate his superior feel for the game. It’s one thing to be a top scorer who’s a fast skater, but Nazar exemplifies the pureness of playmaking; one who wants the puck simply to make everyone around him better. His process to create scoring chances is kickstarted by making sharp reads without the puck, which in conjunction with his breakaway speed rapidly develops into a full-bore thrust into the opposing end. Nazar quickly became a trusted teammate and lends his support anywhere on the ice. Yes, there will be turnovers, and sometimes his spin moves can make protecting the puck harder. But Nazar is capable of spearheading an entire up-ice attack from start to finish with or without ideal circumstances.