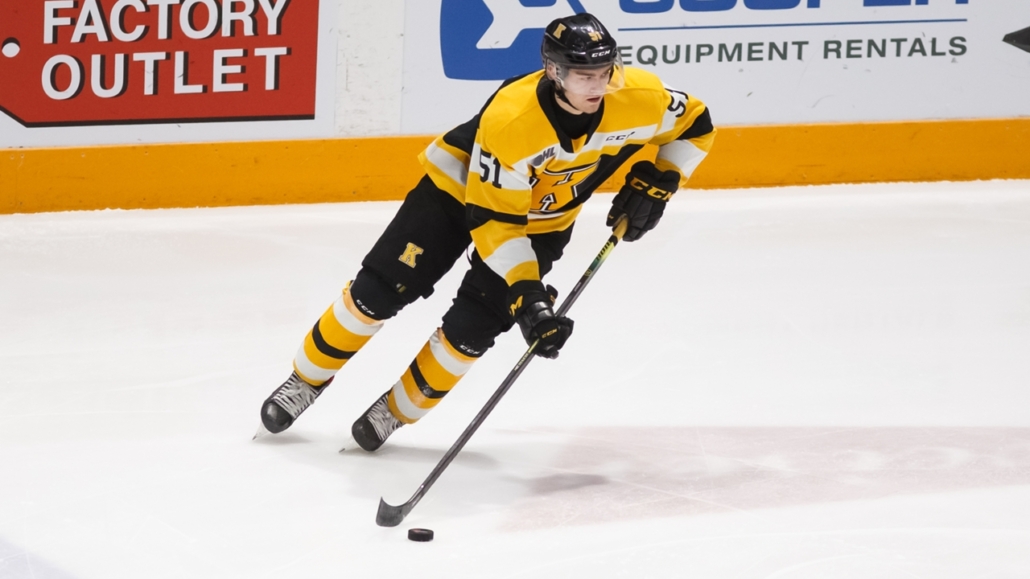 Wright has done plenty to validate his standing as the consensus No. 1 pick for the 2022 NHL draft. From his gaudy production in both in league and international play to his stylistic similarities to current NHL stars, Wright’s growing list of accomplishments serve as his membership card into history’s exclusive group of premier draft prospects. At age 15, he became only the sixth player in history to be granted “exceptional status” into the Canadian Hockey League; a process run by the Ontario Hockey Federation and Hockey Canada that can waive the CHL’s age restriction and allow rare talents to join earlier. Wright was one of those “exceptions”, and he rewarded major junior’s governing bodies by being named the 2020 OHL Rookie of the Year after a 39-goal, 66-point campaign. Although he opted not to play elsewhere during the OHL’s 2020-21 season cancellation, Wright dominated the under-18 world championship last spring. As captain for gold-medal-winning Canada, Wright tied 2023 draft phenom Connor Bedard for the team scoring lead with 14 points (9 goals, 5 assists) in five games. His power-play goal late in the first period kickstarted Canada’s rally to beat Russia in the title game.

Oct. 22, 2021: Wright and his Frontenacs were middling in the scoring race and standings, respectively, through the first five games of the 2022 season, Although he centers the top line and runs the first power-play unit, Wright should not be classified as Kingston’s “straw that stirs the drink”, as he is tied for third in scoring (2 goals, 4 assists in five games) on a team with one of the league’s better top-six forward groups. He usually is flanked by trusty Slovakian scorer (and Los Angeles Kings’ prospect) Martin Chromiak and speedy 200-foot winger Paul Ludwinski, who like Wright is in his first year of NHL draft eligibility. The trio sees a ton of ice time during all situations, and Ludwinski and Wright serve as Kingston’s top penalty-killing duo. On the international stage, Wright attended Team Canada’s summer evaluation camp for the 2023 under-20 world junior hockey championship and he is expected to be featured prominently once the tournament starts in late December.

Jan. 20, 2021: We’re deep enough into Wright’s draft season to know that he’s no longer a lock to go first overall, which now makes him more susceptible to dropping out of the top five entirely. Wright has been his own worst enemy in the first half of his draft season, and it goes beyond his pedestrian numbers that includes a 1.24 points-per-game average that barely gets him into the OHL’s top 30. Wright has been surprisingly inconsistent with just about everything else unrelated to point production, and he’s been caught puck watching and standing around far too often for a top prospect known for his strong work ethic and leadership. No better example of this casual approach was at the under-20 world junior championship, where Wright was practically invisible in his two games while showing a disconcerting lack of commitment to wining battles. What was even more surprising was that he went into the tournament playing his best hockey of the young season.

One explanation for Wright’s sub-optimal production could be Kingston’s wealth of scoring  on each of its first three lines — 10 Frontenacs have a points-per-game average of 0.60 or higher, including three in the league’s top 20. Another could be the fact that the chemistry with reunited linemates Martin Chromiak and Zayde Wisdom isn’t as visible as it was during the 2019-20 campaign. Wright definitely shows flashes of ridiculous IQ and calming things down, but he’s also been guilty of turning pucks over and settling for low-percentage shots. Playing within a loaded lineup has its pluses and minuses for a skilled forward, but it shouldn’t preclude a No. 1 draft prospect from ranking among the league leaders in most major offensive categories. If in fact Wright goes first overall, he would have the lowest scoring rank (currently 26th) of any of the 10 forwards taken No. 1 at the draft.

Wright is one of the smoother skaters you’ll find in junior hockey. His skating style is similar to Sidney Crosby, where explosiveness from a standstill is consistent and open ice is attacked with speed and confidence. Wright has a powerful stride and his balance and agility are already at an elite level, which makes it easy for him to cut inside or out when fronted by an opponent. As dangerous as he is on open ice, Wright can think and play the game at either a deliberate or feverish pace, and he rarely looks out of control or without alternatives. Most of his time in the defensive zone is spent assisting his defensemen down low, but Wright can break out of a collapsing pocket and force defenders to begin a hurried backskate from their point position. Although his overall speed is more above-average than elite, Wright’s reaction timing and rapid acceleration makes his speed problematic for both defenders and backcheckers.

Wright is a dual threat who can beat you in many ways, but what seperates him from the average top scorer is that he can generate or finish dangerous scoring chances multiple times a period. The first thing opponents have to prepare for once Wright enters the zone is the seam or diagonal pass towards the far side or back door. He can execute these passes from either his forehand or backhand immediately upon gaining the blue line, and will do so while looking off. If he hangs onto the puck, Wright’s world-class shot becomes the bigger concern, as he can snipe the upper-half of the net from the top of either circle. The velocity Wright generates from his wrist shot prevents goalies from controlling rebounds, but it’s the release and accuracy of his shot that makes him a netminder’s most feared adversary, especially from the middle of the ice.

Wright has excellent vision and is creative with the puck. He attempts a good number of high-risk passes into the middle or while in traffic, but Wright’s completion percentage during a given shift is near-perfect, and he’s rarely the culprit when the tide turns in the opposition’s favor. He can run the power-play half wall or point and he develops instant chemistry with different types of linemates.

Attempting to play a sound 200-foot-game is something Wright displays every night. Once possession changes, Wright immediately tracks the puck’s location, anticipates its travel, and hustles to pressure opponents into turnovers. His motor doesn’t always run high, but he’s quick to the puck and will battle it out late in his shifts. Wright supports his defensemen below the circles and in front of the net and knows when to release to the slot if his presence isn’t required along the boards. He kills penalties and is on the ice for all late-and-close situations, and it’s common for his coach to use him every other shift as time remaining becomes a factor, whether trailing, tied, or ahead. Although he’s an absolute horse along the boards and never shies away from contact, Wright’s decision to initiate contact seems to be driven by the desire to collect the puck rather than deliver a statement hit or simply finishing a check. His ability to go for the puck and the man simultaneously plays a critical role in breaking up plays and neutralizing opposing possessions, as Wright transitions off-the-puck pressure to spearheading a counterattack in an instant. But one must consider that it’s common for top scorers on junior teams to be given defensive assignments, and although Wright appears to have earned these responsibilities, it’s more likely his time in the NHL will be as a scoring center rather than a 200-foot type. Another area where he deserves credit is at the faceoff circle, where he improved from 48 percent in his first OHL season to 65 percent at last season’s under-18 world championship, and later 51 percent through his first five games of 2021-22.

Wright’s understanding of the game is higher that most prospects, and one could make the argument he’s the smartest of all draft-eligible forwards. One of the many areas where he reveals his high IQ is positioning or anticipation in the neutral zone, as Wright’s interceptions are driven mostly by reading an opponent’s intentions. His ability to sense backside pressure makes his weaving and slicing even more dangerous since he can force opponents to overload a side when chasing him. Most important is Wright’s ability to position himself away from the puck in preparation for a clean look at the net — he has acute intuitive insight into where the puck will end up, and that includes loose puck battles with control up for grabs.

Looking Back: How 2020 Changed Hockey

Slumping Maple Leafs too talented to write off
Scroll to top