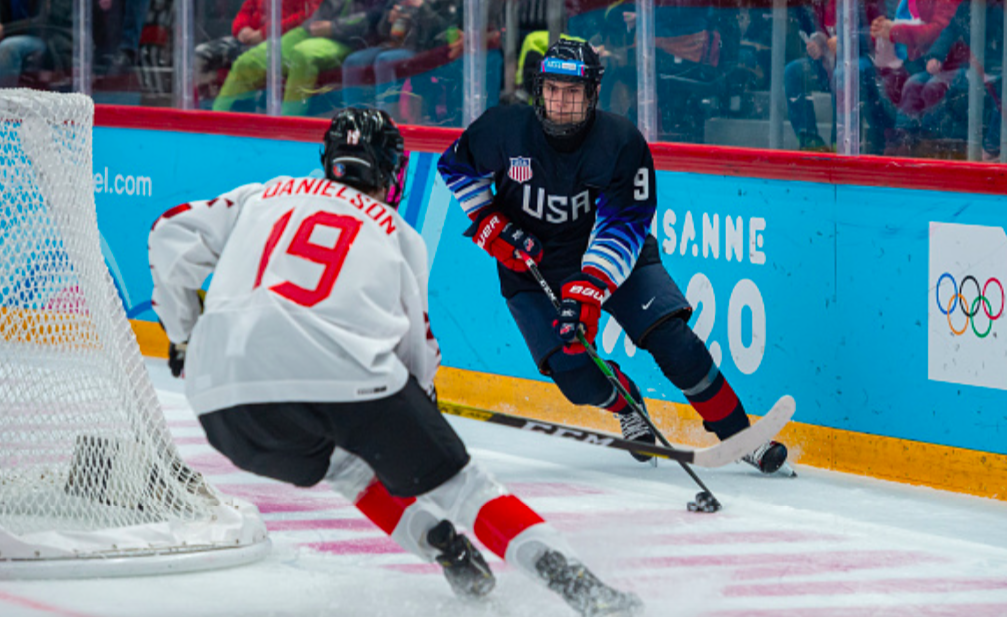 A strong-skating power forward with skill who is committed to Boston College, Gauthier is one of the premier wing prospects for the 2022 NHL draft. Born in Sweden while his father Sean (a former Winnipeg Jets draft pick ) tended goal for Skelleftea, Cutter was later raised between Arizona and Michigan, where he starred for talented Honeybaked and Compuware squads before he earned a spot on the U.S. National Team Development Program. For the latter’s under-17 program a season ago, Gauthier proved his versatility by shifting between the center and left wing positions, and by serving in critical roles such as power-play focal point and penalty killer. In fact, his per-game scoring rate in the second half as a center was over a half point higher than his first half output while playing wing. Gauthier eventually earned a three-game promotion to the tougher under-18 program, picking up two assists and playing with jam.

But Gauthier saved his best pre-draft hockey for this season with the U18, and he’s doing so without playing major minutes on a deep team. Unlike last season when a chunk of the U17’s 2004-born forwards were separated between age groups, the U18’s now boast a unified attack with three deadly scoring lines and an offensive-minded defense corps. All nine forwards within the first three lines average over 0.60 points per game, with Gauthier one of six to register at least one point per match. He has played on the wing for most of this season.

Dec. 1, 2021: Gauthier is a key contributor to this year’s under-18 NTDP, which is expected to dominate the first round of the 2022 NHL draft more so than any other junior, collegiate, or European program.  Although he isn’t being used as first-line wing who receives optimal zone starts, Gauthier gets his share of playing time during all situations. He’s used by his coaching staff as a sort of fireman and overall problem solver, and it became obvious early into his draft year that he is one of several NTDP prospects who would easily handle top-player responsibilities on any other junior team. He was given an “A” rating in Central Scouting’s preseason watch list and backed it up in early November with an impressive Five Nations tournament in Switzerland

Gauthier is a excellent skater in many areas, and his combination of power-forward size with breakaway speed makes him a bit of a unicorn among his 2022 draft-eligible peers. Although he’s prone to go through periods of standing around, Gauthier does show a quick first step and long, powerful stride that helps him accelerate into open ice and well past backskating defenders. Much like teammates Logan Cooley and Frank Nazar III, Gauthier’s button-hooks at the line are pronounced, and he shows patience when waiting for support to arrive.

Gauthier is a tough out who can dominate board play in several ways. Not only is he an elite stickhandler, but he’s proven time and again to be a threat coming out from the corner. He’s agile in every direction and is difficult to knock off balance, especially when he’s on his edges while taking the puck strong to the net on the backhand. His deft stickhandling when static or mobile plays a critical role in his shot generation, and it’s common to see Gauthier play keep-away by using a series of inside-out moves while keeping the puck on a string. And he seems close to perfecting a one-arm chip or lead pass to himself in 1-on-1 situations that could cause defenders to regret playing the man instead of the puck.

Gauthier is a dual threat whose flash and flair are neither forced nor untimely. He creates highlight-reel plays without the benefit of time or space, and opponents have to respect his dangerous 1-on-1 abilities. An inside player who attacks the net with confidence, Gauthier can serve as either a sniping winger or a pass-first playmaker. His wrist shot is a difference maker from any angle and he’s hit the post or forced the goalie into a tough save with blistering attempts from the left circle. Gauthier is used in a manner of ways on the NTDP’s deadly power play and will fill any role with confidence and reliability, to include the net-front and bumper positions. He’s also dipped into his passing arsenal with more frequency, as several of his primary assists came off precision seam passes from either his forehand or backhand.

Gauthier is a hard-hitting winger who can impact shifts in all three zones. He’ll deliver loud hits along the boards and will let an opponent pay a hefty price for going toe to toe with him. A testament to Gauthier’s reliability off the puck is his occasional use and effectiveness on the penalty kill, including serving as the lone forward in 5-on-3 disadvantages. He’s a dedicated backchecker who actively uses his stick and long reach to block passing lanes, and his desire to pressure the puck doesn’t prevent him from releasing or retreating to cover the back door or an opposing point man. Gauthier’s keen anticipation and quick hands leads to a handful of interceptions and immediate counterattacks per game.

Gauthier is a gifted player whose cerebral decision-making and outside-the-box thinking makes potentially untenable situations more promising for both him and his linemates. Although his game could use more shift-to-shift consistency, Gauthier is developing into the kind of forward who rarely settles for the easy wrong over the hard right, and his delay tactics at the opposing line reveal patience, maturity, and foresight. Gauthier is a creative puck handler who rarely telegraphs his intentions, and his high panic threshold when controlling the puck in tight areas or while moving at top speed off the rush extends possessions and keeps opponents pinned in their own end. He’ll attempt a risky play every now and again, but that seems par for the course for all notable NTDP forwards since the program’s inception.