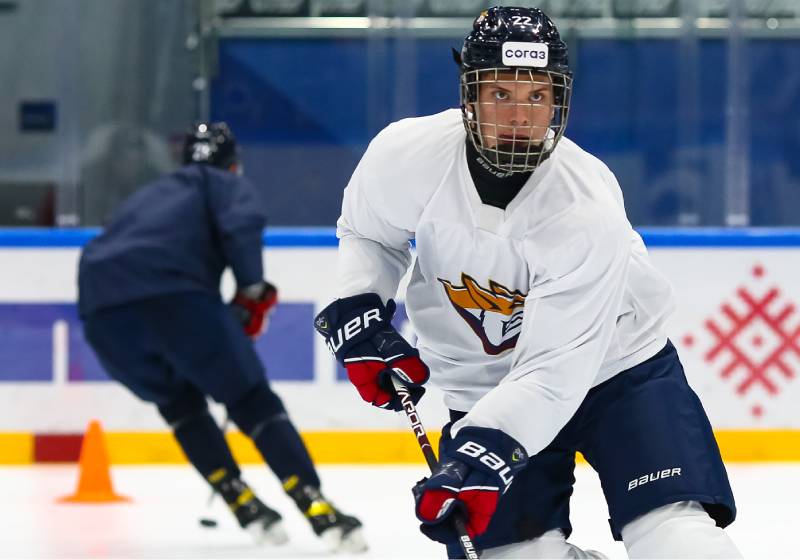 A skilled two-way winger who delivered an eye-opening performance at the 2021 under-18 world championship, Yurov is our top Russian prospect for the 2022 NHL draft. He produced an impressive draft-1 campaign for Magnitogorsk’s junior team, Stalnye Lisy, and has also played against men in the KHL in each of the past two seasons. Although he’s produced only one goal and one assist in 38 career KHL games, Yurov has made up for it by dominating the top Russian junior league and delivering clutch performances at high-profile prospect tournaments. Last season, Yurov led deep Stalnye Lisy with a 1.09 points-per-game average (25 points in 23 games) with over four shots a game. He eventually joined Russia’s U18 squad in the spring for the world championship in Texas, where he took home the silver medal. Yurov was a standout as Russia’s top-line wing for all seven games, tying for second in the tournament with seven assists and placing third in overall scoring with 11 points. It wasn’t the first time Yurov put on a show in front of a chunk of the NHL’s scouting community, however, as Yurov was among the top scorers to help Russia win gold at the 2019 World under-17 Hockey Challenge. He’s doubled his MHL production this season with 12 points (3 goals, 9 assists) in only six games.

Nov. 9, 2021: Yurov’s KHL career is over 40 games old and he’s played 10 minutes or more in only two of them. Much like fellow Russian right wing Vasily Podkolzin’s 2019 draft year, Yurov has found it tough getting minutes as a teenager playing for a contending veteran team. Although most of his few shifts per game with Magnitogorsk can be summed up as short, bland, and safe, Yurov appears to be receptive, coachable, and hard working. His eventual demotion to the MHL was temporary, as it took him only four games to return to the parent club and assume his benchwarmer role. With Stalnye Lisy, Yurov served as Ilya Kvochko’s wing on the top line and also during the power play, and the duo went about their business by alternating between who was next to toy with the opposition during a zone entry. Yurov torched the MHL for 12 points (3 goals, 9 assists) during his latest reassignment, in which Stalnye Lisy went a perfect 4-0-0 and outscored opponents 31-8. He’ll likely get another taste of high-profile international hockey as he was named to Team Russia’s roster for the under-20 Four Nations tournament in mid-November. Yurov should also be expected to also play for Russia at the 2022 world junior championship later in December.

Yurov is an expert puckhandler with strong skating ability in any direction. Whether he’s leading the attack with straight-line speed or spearheading the cycle while utilizing his edges, Yurov is the kind of player any coach would entrust with puck-carrying duty. He has a quick first step and a powerful stride, but Yurov’s anticipation towards the puck always seems quicker than anyone else on the ice. He can lead the breakout from deep inside his own end and remain close to the puck after he delivers crisp, accurate passes over either long or short distances. When in control, Yurov can quickly slice through both passive and dogged neutral-zone coverage before slowing things down to prepare for a lengthy possession. He’s a slippery skater who can exploit any gap by darting and weaving in different directions, and it’s common to see Yurov take the puck for a skate through traffic and gain the opposing blue line without ever being touched. Still, perfect, open-ice conditions are not a requirement for him to execute a high-level play. Attacking the net with speed and power is done in a controlled manner, and opponents have learned that it’s probably best to retreat towards static coverage rather than attempt to take the puck from him.

If Yurov isn’t the deadliest dual-threat forward in this draft, then he’s easily among the top two or three. He boasts the deadly combination of elite vision with a world-class shot, which makes his potential for annual offensive explosions as high as any player available. Stunning accuracy seems to come naturally to Yurov, as his saucer and bank passes are delivered right into a teammate’s wheelhouse, and most of the laser beams he delivers from the circle are labeled for inside the post or just under the crossbar. Hardly a fire-and-forget shooter, Yurov is a finisher beyond slingling pucks at the net, as he possesses several methods to beat a goalie from in close. His likes to play inside and will target the seam repeatedly, especially as he operates the right half-wall or point on the power play.

Yurov is dedicated to the 200-foot game and he’s one of the few scoring wingers among draft prospects who’ll consistently support his defensemen below the faceoff dot. When retreating into a backskate, Yurov properly positions himself with complete situational awareness as he covers passing lanes with an extended, active stick. He rarely killed penalties at the KHL or MHL level, but Yurov at last season’s under-18 world championship was frequently summoned when Russia was down a man. Therefore, there’s no reason to believe he wouldn’t be an effective penalty killer in league play, especially since he’s willing to battle along the boards and cover the low slot. As far as his physicality, Yurov isn’t much of a hitter but he is effective at angling puck carriers into the corner before delivering a stiff shoulder. Although he’s a few years away from filling out, Yurov held his own in one-on-one battles against adults during limited KHL time. With those hands, you can trust him in any late/close situation.

It doesn’t take long to notice how clever and multi-tooled a forward Yurov can be, and his teammates routinely defer to him to handle pressure situations in any of the three zones. Part of it is Yurov’s incredibly high panic threshold, as he displays coolness while delaying with the puck.  He rarely makes rushed decisions, as he will use multiple routes to either kill clock, allow a line change, or simply wait for puck support to arrive. Any checker who tries a frontal approach is at risk of overcommitting, as Yurov can use clever stickhanding or his elite vision to bypass the neutral zone without much effort. Yurov is reliable with the puck in many ways, and his decision making under pressure can trap the opposition and force them to either work harder or accept failure. The special talents at the top of a given draft class usually get there by crafting and executing momentum-changing plays at will, which is exactly what Yurov has done the last two seasons for both Stalnye Lisy and Team Russia. He’s played wing most of his junior career but his on-ice mannerisms, decision making, and skill set could make Yurov a candidate to play center at higher levels.