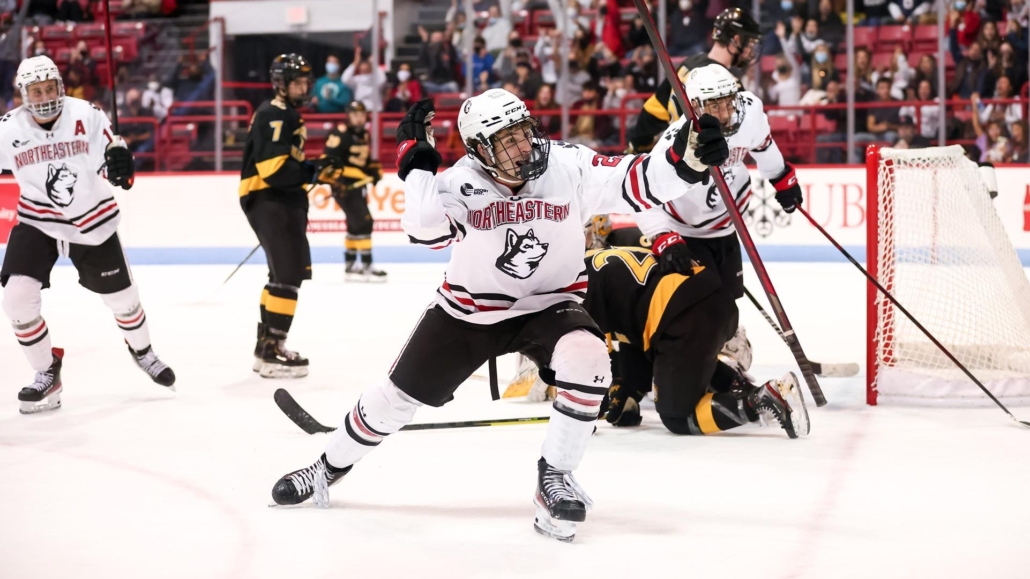 Never before in NHL history has there been first-round picks from different draft years who bore the same first AND last name. But that is likely to change this summer in Montreal if Northeastern University freshman center Jack D. Hughes gets selected within the first 32 picks; just three years after the New Jersey Devils grabbed namesake Jack Hughes (also a center) at No. 1 in the 2019 draft. Although unrelated, both are American-born players who trained and starred for the U.S. National Team Development Program, with the elder Hughes being raised in Michigan while his younger counterpart  is a Boston-area native. Both can also be classified as cerebral pass-first playmakers, but that’s where the similarities end, as Jack D. Hughes is more abrasive, gritty, and physical than New Jersey’s graceful finesse pivot. Nevertheless, the younger Hughes has been a high-profile prospect from the late-2003-born year group for quite some time, and he is a realistic candidate to crack the top 10 in this year’s draft. And for those keeping score at home, the closest we’ve come to two first-round draft picks with the same name are the two Colin Whites — the first being the former Devils’ second-round pick who played defense for two of their Stanley Cup winners in the early 2000’s, while the Colin White currently playing center for the Ottawa Senators was drafted 21st overall in 2015.

Hughes has a late birthday, meaning he turned 18 before Jan. 1 of his first eligible draft year, and his two seasons with the NTDP were spent alongside mostly 2021 draft prospects. But the age difference mattered little, as Hughes quickly established himself as one of that group’s better players. He ranked near the top in team scoring with 34 points (8 goals, 26 assists) in 38 games last season, and Hughes’ 0.68 assists per game tied for second among NTDP forwards who appeared in at least 20 matches. But a late-season injury kept him out of Team USA’s lineup for nearly two months before joining them for the last four games (1 goal, 1 assist) at the under-18 men’s world championship, where the Americans finished a disappointing fifth.

Dec. 28, 2021: Much like 2021 second-overall pick (and NTDP alum) Matt Beniers with Michigan a season ago, Hughes wasted little time moving up Northeastern’s depth chart to establish himself as one of the top players on a deep team expected to contend for an NCAA title. But unlike Beniers, who began the 2020-21 season on the Wolverines’ fourth line, Hughes —  the youngest player in Division I hockey — was immediately thrust into a middle-six role, where he stayed for close to 10 games before assuming the top-line slot in mid-November. He’s been used consistently on the Huskies’ lead power-play unit, where he can occupy either circle or half-wall to set up for one-timers or seam passes. It does bear mentioning, however, that Northeastern’s power play (6-for-47) is one of the worst among nationally-ranked teams. Still, seven of Hughes’ nine points, including four of his five goals, have come at 5-on-5.

A hunched skater with pep in his step, Hughes shows occasional examples of explosiveness and quickness over short distances, but where his skating prowess is more noticeable is when he’s operating in the tight areas along the boards or behind the net. An opportunistic center who darts into passing lanes for a chance at a counterattack, Hughes is off to the races once he anticipates a telegraphed pass, and he will effortlessly streak through the neutral zone while bypassing or powering through defenders.  His overall skating package is more powerful than it is graceful, but his elite stickhandling, soft touch, and 360-degree vision adds a significant layer of finesse to his game.

Hughes is an expert stickhandler who can tease lunging opponents as he controls the puck while moving laterally or backwards. He doesn’t attempt to play keep-away against seasoned NCAA defensemen as often as he did in junior hockey, but the ever-shifty Hughes still drops a tricky move or two when he needs to evade a pesky checker.

Hughes has a team-first attitude and incorporates his entire unit into the attack. He is not a puck hog and looks confident when whipping long, crisp passes up the ice or across the seam. Hughes is the forward you want controlling the flow of a possession inside the offensive end, but he also know when to give-and-go for a dash to the net. As strong a passer Hughes can be, it’s his quick hands that can be the bigger difference maker when scoring chances are hard to come by. He deadens tough passes perfectly, even when moving at top speed and needing to reach back to corral an off-target delivery. And although there’s no way to really quantify this, Hughes has to be one of the best high-flip passers of any prospect in any recent draft class. This is important for several reasons, beginning with his high panic threshold that allows Hughes to delay appropriately before quickly lobbing the puck outside his own zone without committing an icing.

Although he can classified as a playmaking center, Hughes is a threat via has a heavy shot, quick release, and a goal-scorer’s touch. Cleaning up in front of the net is one of his strong suits, but Hughes seems partial to slipping away from a scrum to occupy the circle for a one-time blast. Being confident and decisive limits hesitation in these circumstances, and Hughes seems to have his mind made up well before winding up to shoot or pass the puck across. His rapid decision-making process also comes into plays during odd-man rushes, as Hughes will look off and use pump or shoulder fakes as he inches towards the middle of the ice. Another weapon he has in his arsenal is a powerful backhander, although he tends to use it in situations when delaying an extra second to switch to the forehand would increase his success rate.

Hughes is a nuisance to the opposition for multiple reasons. He displays a fearless, tough-as-nails attitude when attacking high-traffic areas such as the front of the net. He is an active forward off the puck; shoulder-checking for backdoor dangers consistently and dropping into the low slot as his defensemen release for the corners or end boards. It’s common for Hughes to engage in contested one-on-one battles at least once during a given shifts, and anything within his search radius becomes a priority target for a stiff shoulder, hard shove, or timely hip check. More times than not, Hughes’ physicality achieves the desired effects, i.e. separating the opponent from the puck or forcing him into a hurried decision.

Playing a physical brand of hockey is just one of several ways Hughes can impact a shift, and he is highly competitive once he actually commits himself to a puck battle or net-front struggle, often using a hard crosscheck to send a message. Speaking of his stick, Hughes may be one of the more active stick-swingers you’ll ever watch in your lifetime. He uses it in a scythe-like manner, one which can be construed as wild or uncontrollable. But for whatever reason — timing, hand-eye coordination, luck — Hughes breaks up a significant number of opposing breakouts by way of his long, effective stick.

Hughes clearly is a quick thinker with outside-the-box creativity, but there definitely are two ways to look at Hughes’ overall decision making. The optimist would applaud him first for his ridiculous vision and sense of space, and again for his delivering of accurate, high-end passes that are dashed with flair and a high degree of difficulty. The downside is that he assumes far too much risk, and Hughes can look overconfident, borderline careless, when attempting those patented no-look spin passes on the backhand that travel right into the middle of the ice. It seemed that Hockey East opponents quickly caught on to this tactic, which in turn forced Hughes to drastically cut down on these plays, albeit with a likely a nudge or two from his own coaching staff.

Another mild concern is Hughes’ aforementioned stick use, as all seven of his minor penalties through Dec. 4 were stick-related fouls, and five came during tied or one-goal games. This is relevant since Northeastern has become the preeminent collegiate program in the Boston area with realistic national title aspirations, so limiting undisciplined play is something you’d like to see Hughes achieve as he continues to develop in college.