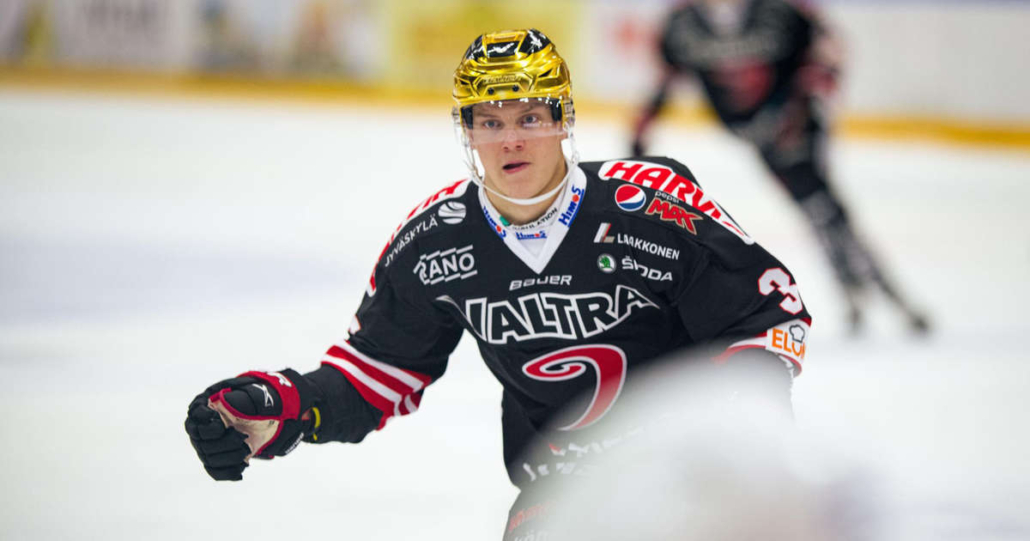 Kemell is one of the top prospects in the 2022 NHL draft and one of several candidates who will challenge center Shane Wright for first overall. He’s already garnered a strong reputation across Finland’s hockey spectrum and gaining international notoriety is only a matter of time. Kemell, however, is not a complete stranger to the spotlight, as he entered this draft year with several big-game performances at crucial tournaments, including the 2019 under-16 European Youth Olympic Fair (2 goals in 4 games) and the 2021 under-18 world championship (3 goals in 7 games). Away from international play, Kemell in 2020-21 was one of the most productive 16-year-olds in the under-20 SM Sarja. Although Kemell did suffer through brief periods of bad luck and frustration in JyP U20’s opening-round playoff loss to SaiPa, he still led JyP’s junior team in scoring with 36 points (22 goals, 14 assists) in 38 combined games between regular season and group play. Kemell has a history of playing and excelling as one of the youngest players on a given team, and it took him a matter of games into this season to not only unseat high-profile teammate Brad Lambert as Finland’s top draft prospect, but also lead a men’s league in scoring in the process.

Oct. 26, 2021: Kemell is JyP’s top scorer and an early-season SM-Liiga MVP candidate. Although his team is one of the league’s youngest, Kemell has delivered them victories with clutch scoring to place JyP close to a playoff spot after they posted the league’s worst record last season. He has spent the entire first quarter of the 2021-22 campaign as a third-line wing with Los Angeles Kings’ prospect Samuel Helenius as his center and 2001-born left wing Samuel Valkeejarvi on the opposite flank. Initially slated as an energy line with checking capability, the trio quickly became effective at creating turnovers off a physical forecheck and pinning the opposition in their own end. Although both Helenius and Valkeejarvi have helped Kemmel with strong board and cycle play, Kemell has proven once again that he is a low-maintenance scoring threat capable of driving possession and creating his own shot. Despite spending most of his time during 5-on-5 with his aforementioned linemates, Kemell’s 17 points through Oct. 27 is 11 and 13 points higher than Helenius and Valkeejarvi, respectively. In terms of special teams, Kemell is a fixture near the left circle on the first power-play unit and is on the ice for most late/close situations, including when JyP uses an extra attacker trailing late in regulation. He isn’t killing penalties nearly as much as he did at the SM-Sarja and international levels (Kemell averages less than 30 seconds a game short handed), but he ranks third among JyP forwards with a 17:10 TOI and a team-best 6:18 of third-period ice time. Most of his goals and assists have come when the score is either tied or a one-goal difference.

Kemell moves quickly and is an open-ice threat. He is a confident puck carrier with a slight hunch who looks aware and decisive when leading his team’s attack. Kemell’s powerful end-to-end rushes might look pretty, but the key is that they take the heat off his defensemen during breakouts while also expanding the ice for his linemates. The benefit from his puck handling from inside his defensive zone is that Kemell keeps opponents fixated on him as he exits and cuts through center ice. Time and again, Kemell’s inside-out moves at top speed force checkers to resort to lazy stick lunges while their supporting defensemen hastily retreat from their line. This affords him plenty of time to survey the zone and prepare for his next two or three moves. It also seems like SM-Liiga defenders are having a tough time knocking him off the puck, as Kemell displays tremendous lower-body strength while protecting the puck in tight spaces. He likes the puck on his stick and it shows.

Of all the players within his five-man unit, Kemell is a goalie’s biggest problem the second he enters the offensive zone. He can pass the puck onto the tape from anywhere on the ice, but his shot is the far bigger threat. Kemell has scored with consistency with his wrister and one-timer at every level, and he quickly acquaints SM-Liiga netminders with an NHL-caliber shot that explodes off his blade. He’s buried pucks using the wrister from areas as distant as the deep point and as low as the goal line. Loose pucks moving in any direction should be treated as an opportunity for Kemell to whip a labeled turnaround shot. On the power play, Kemell is a key figure on JyP’s primary group for several reasons. He is consistent in entering the zone and delaying with the puck to allow the unit to set up, usually after sliding into the left circle. From there, Kemell’s one-timer becomes a danger, and he and his point man (usually Carolina prospect Anttoni Honka) will play catch or exploit an open seam. His numbers may paint him as a shoot-first winger, but Kemell is a capable playmaker and set-up man who can deliver the puck with accuracy and lethality.

Kemell is the best 200-foot winger in the draft. He can be trusted in any situation and he delivers decisive results late in games. A natural rally starter who can change the momentum of a shift, period, or game either on or off the puck, Kemell wants to be a difference maker. If there’s a puck up for grabs, he going for it. From diving to break up a seam pass to delivering a crunching hip check in open ice, Kemell plays with a strong desire to succeed while acting in a team-first manner. He sacrifices his body on the forecheck and will hound a puck carrier the length of the ice. Kemell is a pain to play against in any zone and he does not back down from challenges.

Kemell’s feel for the game is at a veteran level and he’s right there with Shane Wright and Logan Cooley for the highest IQ of any draft prospect. He’s always on the move and isn’t married to a particular spot on the ice that would tempt him to remain still. Kemell’s eyes are constantly glued to the puck, and when they aren’t, he’s shoulder-checking to prevent any weakside or backdoor threats. Whether he’s on the puck or off it, Kemell always appears to be in complete control. His positioning and vision are two of several traits Kemell can use to outfox the opposition, and his increased role during the game’s critical moments is a testament to the trust he’s earned from coaches at every level. Another impressive aspect of Kemell’s physical style is that he’s been able to maintain his toughness and hitting without taking any penalties (literally, as in he’s played 16 games without taking a penalty). You rarely see him make an unforced error or hog the puck for a sloppy entry into traffic.

Slumping Maple Leafs too talented to write off