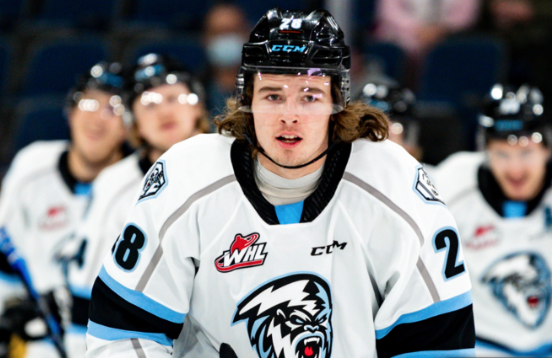 A two-sport star from an athletic family with longstanding ties to the WHL, Geekie is following in the footsteps of his older brother Morgan, a center for the NHL’s Seattle Kraken, and his father Craig, a defenseman for the Brandon Wheat Kings in the early 1990s. But Conor, a Manitoba native whom the Winnipeg Ice took second overall in the 2019 WHL Draft, has the potential to become the best of the three.

Although he doesn’t have much experience at international events, Geekie gave his pre-draft profile a boost with an standout performance for Team Manitoba at the 2019 WHL Cup; a Fall tournament dominated in the past by the likes of current NHL stars Mathew Barzal and Brayden Point. Geekie barely played in the WHL during the 2019-20 campaign and didn’t become a productive regular until last season, albeit under a shortened 24-game schedule. He finished second to Regina’s Connor Bedard in WHL rookie scoring with 23 points (nine goals, 14 assists), and was named Rookie of the Month for May. Geekie was invited to participate in Team Canada’s under-18 development camp last summer, which means he likely would have represented his country at the Ivan Hlinka tournament had Hockey Canada opted not to pull out over pandemic concerns.

Jan 17, 2021: Geekie joined the Ice after the Team Canada U18 camp and picked up right where he left off from the season prior, recording points in each of his first four games, including three multi-point efforts. He spent most of his first 35 games centering Winnipeg’s second line, flanked by skilled wingers in 2001-born Jakin Smallwood and 2002-born Mikey Milne. It bears mentioning that Geekie and Winnipeg’s top-line center (and fellow 2022 draft phenom) Matthew Savoie rarely shared the same ice at even strength.

The Ice is a loaded team considered by many to be the best in the entire CHL. Winnipeg through mid-January was a league-leading 27-5-2 with a ridiculous goal differential of plus-88, and Geekie as a minute eater certainly helped them achieve those marks. It’s reasonable to assume that Geekie would have already participated in benchmark draft-year events such as the Hlinka tournament and the now-cancelled CHL Top Prospects Game, but keep in mind that the Ice is favored to represent the WHL in May at the Memorial Cup — another must-see event on the scouting calendar, only closer in proximity to the NHL draft.

Geekie is an expert puck handler with shiftiness and impeccable timing, although his straight-line skating generally falls short of aesthetically pleasing or explosive. But how Geekie appears when he’s in motion doesn’t prevent him from doing whatever he wants with the puck, and there always seem to be several examples per game of his elusiveness and escapability when fronted or checked in tight spaces. Geekie is a breakout threat who can deliver end-to-end rushes, and dangling or walking a defenseman are within his capabilities. What makes this even more impressive is that Geekie, a big boy with a short stride and upright skating style, can appear somewhat graceful when slicing and dicing into open ice with a full head of steam.

Although it may take Geekie longer to reach top speed than your typical high-scoring teenage forward, Geekie has consistently accelerated past defenders in the neutral zone, and sometimes even keep them draped on his back after a few failed stick checks. Geekie plays with an incredibly high motor and always stays in motion, so the limitation of having a slower first step is often counteracted by his penchant for reading plays and catching opponents flat footed or napping. Any critique of Geekie’s skating that considers it to be a weakness or some sort of red flag should add the disclaimer that it certainly hasn’t prevented him from spearheading or finishing so many odd-man rushers per game.

Geekie is a brilliant playmaker with 360-degree vision and an excellent scoring touch to boot. And although the term “playmaker” can be an ambiguous classification reserved for forwards who simply record more assists than goals, Geekie can act like a pure setup man on shift, and create his own shooting angle the next. This dual-threat capability helps Geekie personify the center’s responsibility for “making those around him better” since the ice expands when defenders and goalies have to respect his shot as much as his passing acumen. Therefore, don’t count on Geekie to pass up high-danger shots, as his 118 shots in 35 games through Jan. 17 leads the Ice and also ranks him in the top 20 in the WHL. He boasts a nasty snap shot and accurate wrister, which is how he scores the majority of his goals.

Being slotted away from Winnipeg’s nominal top line has not impacted Geekie’s production, as he ranked among the WHL’s leaders in both assists and points through mid-January. But as impressive as these raw numbers are for a first-year draft eligible, they actually underscore how low maintenance a self starter Geekie is; one who is directly responsible for the creation of multiple chances that don’t always end up in the back of the net. He avoids being overly cute with the puck, and his linemates (depending on the situation) have to be ready to receive a hard tape-to-tape pass or a soft saucer off his backhand.

It is fair to ask how Geekie’s massive fame impacts his ability to generate points, especially since he holds a distinct size advantage over most of his junior-age opponents. He can be a physical brute along the wall, but Geekie also delivers open-ice hits without looking like an unhinged player who is seeking vengeance. Geekie plays a fairly disciplined game and seems to understand he’s more valuable on the ice as a playmaker than a menace on skates who’s looking to intimidate defenders into hasty decisions.

Geekie rarely kills penalties but he is an effective checker for his combination of verve, acute anticipation, and a massive wingspan. He is consistent in his looting of unsuspecting puck carriers via stick lifts, and Geekie’s active stickwork routinely deflects shots or seam passes out of harm’s way. He’s taken key faceoffs in all three zones, winning 46 percent (196-for-428) of his total draws through Jan. 16.

Geekie has a high hockey IQ that is highlighted by his vision and creativity. He sees the ice as well as any of this year’s top-end draft prospects, and he rarely settles for low-percentage plays. But there’s a visible air of confidence surrounding Geekie’s playmaking and individual shot creation that is similar to NHL stars such as Auston Matthews or Artemi Panarin, specifically in the way he stops on a dime and cuts towards the middle on his extended forehand, or fluidly backskating to the half-wall while keeping the puck on a string, with the threat of a labeled snap shot off his heels being as high as his crisp, weak-side seam pass. The way Geekie has recorded his points to date adds to his unlimited potential, as exactly half — 19 of 38 — have come off of clean zone entries and odd-man rushes; two areas which can be problematic and reveal bad habits for most teenage forwards.