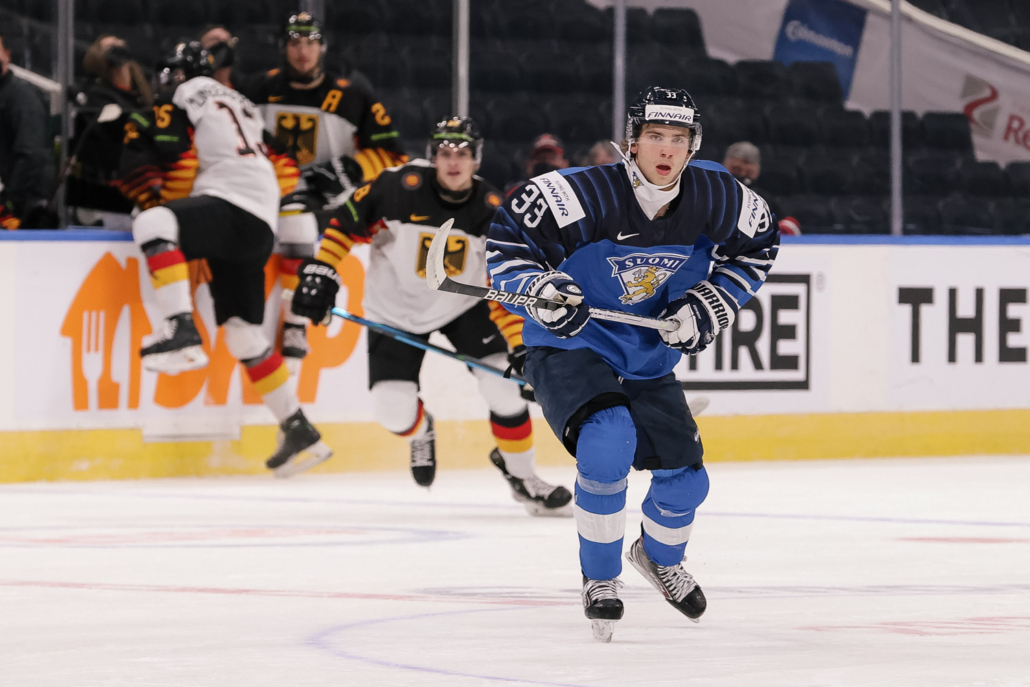 A skilled prospect synonymous with the cream of the 2022 NHL draft for several years, Lambert could also be its most perplexing. Every year, there’s always a handful of draft hopefuls who NHL scouts internally classify as divisive, meaning their individual talent may not be enough to cloak underlying issues like inconsistency, poor attitude, and laziness, to name a few. In Lambert’s case, the bright spotlight of notoriety hasn’t revealed anything disconcerting. But when a high-profile teenager like Lambert plays for three different organizations in three years, the natural reaction is ask why.

The simple truth is that Lambert loves hockey and just wants to play. His father Ross, a Canadian who once played for the WHL’s Saskatoon Blades, was at the forefront of his son’s contract negotiations, first with the Lahti Pelicans and later with IFK Helsinki and JyP Jyvaskyla. Neither Lahti nor Helsinki could guarantee Brad playing time, but JyP obliged, which is why he’s played there for each of the last two seasons and even earned top-line ice time. Although most coaches would rather have their players simply “shut up and skate”, it doesn’t mean that wanting more playing time or the chance at an expanded role makes a player difficult to coach or entitled.

Nonetheless, Lambert appears enthusiastic and comfortable playing with JyP, a rebuilding team who unfortunately sits at the bottom of Finland’s SM-Liiga standings. He hasn’t produced eye-popping numbers during his draft season (six points in 24 games through Jan. 5), which could incline NHL scouts to sour on him after such lofty expectations.  But he also continues to be an annual fixture on multiple national teams, as Lambert has appeared in over 30 games at international tournaments between the under-17 and under-20 levels, combining for eight goals and 18 assists and seeing a consistent role on the top six and power play. Lambert’s ability to deliver impressive short-tournament performances, coupled with his recent surge in league play, has helped stabilize his draft stock and could make any early-season doubters amend their criticisms.

Nov. 20, 2022: JyP wasn’t expected to make a lot of noise in the SM-Liiga because of their young roster, but they started out a surprising 8-4-0, with wins over contending clubs such as HIFK, Jukurit, and KalPa. Lambert lined up as their second-line center during most of this stretch without contributing anything offensively (one assist, 19 shots in first nine games) before he missed a few games with an injury. Upon returning on Oct. 20, Lambert shifted between center and wing, and although his ice time and production both increased thereafter, the team stunk, losing 10 straight with several blowouts creating room for garbage time. Still, Lambert produced two goals and three assists in 15 games since Oct. 20, and his shots per game rose from 2.11 in his first nine matches to 3.13 over the next 15.

Lambert also participated in two noteworthy international tournaments in the under-20 age bracket — the summer World Junior Summer Showcase (WJSS) and the Four Nations tournament in November. Neither of Lambert’s performances at those particular events could be assessed as dominant from a production standpoint, but he definitely played well enough to not only solidify a spot on Finland’s final world juniors’ roster, but convince the staff that he and linemates Ville Koivunen and Samuel Helenius could be a formidable trio in late December when the tournament begins.

Jan. 3, 2022: Lambert picked up steam in his last few SM-Liiga games prior to his arrival in Edmonton for the under-20 world juniors, where he was dictating pace, driving possession, and delivering highlight-reel plays. Although his production (one goal, four assists in two games) were against weaker German and Austrian squads, Lambert still finished the tournament as one of the top scorers. His club team in the SM-Liiga is nowhere near the postseason (they sit 14 points from the final playoff berth through Jan. 5), so he’ll be expected to help JyP climb out from the league cellar and avoid relegation.

Lambert is a turbo-charged roadrunner with excellent speed, which puts him in the running for the fastest skater among all 2022 draft eligibles. He uses an explosive first step and straight-line quickness to rush up ice with confidence and also to apply forecheck pressure. Lambert plays with energy and determination, and he frequently accelerates to top speed well before his opponent realizes the location of a loose puck. Button-hooks, tight turns, and peel-backs also are incorporated into Lambert’s up-ice attacks, but examples of his lateral quickness or directional changes usually come after he already sliced through the neutral zone while skirting the boards on his forehand. Upon entering the zone, Lambert keeps his head up for options with the puck on a string,  but he seems partial to taking the puck wide or around the net rather than attempt a sharp inside move to the high slot (although he’s clearly competent at executing all three). He is depended on to spearhead the cycle for his linemates and is good at playing keepaway, but Lambert has a tendency to get shoved off the puck once the opposition fixes him against the boards.

Lambert is a creative dual threat thanks to his goal-scoring ability and playmaking, but his versatility on the puck seems more pronounced (and effective) when he’s deployed on the wing rather than at center. He has excellent vision and threads the needle (Lambert is an accurate diagonal or seam passer), which partly explains why he’s always been used on the half wall or point during the power play. His quick hands come into play when he’s got the puck down low, as Lambert can pull rapid forehand-to-backhand moves within a foot of the top of the crease. He’s scored plenty of goals with the one-timer from either circle, albeit mostly in junior and international play, but Lambert also owns a tricky backhander that he uses confidently off the rush. Time and again, Lambert has shown an ability to drive his line and create possession, and his play on the international stage consistently ranges from dangerous to dominant

Although Lambert’s speed, vision, and goal-scoring ability helped forge a reputation that he strictly is a finesse scorer or “one-way” forward,  he’s made great strides in improving his physicality and play away from the puck, specifically his role as a middle-six center for rebuilding JyP. There is visible structure to his game, as he maintains textbook spacing with an extended stick while shoulder-checking for backdoor threats. But of all Lambert’s contributions in the defensive end, his ability to breakout on his own is the most effective, and he requires little to no help to take the puck out of harm’s way. Having elite speed and an explosive first step both help in that regard, but Lambert has improved his anticipation, and he also pressures the points with an active stick to create opposing turnovers or hasty decisions. It bears mentioning that Lambert has never killed penalties in any of his 74 SM-Liiga games, and his combined 65 seconds of short-handed time on ice since 2019 came from mere coincidence rather than being given an assignment from his coach.

JyP is a young team that struggles, but it speaks volumes that their most seasoned defensemen are comfortable to acquiesce puck-rushing duties to Lambert once he quickly arrives to the scene. He is a major contributor on breakouts, and Lambert deserves credit for being patient and calculated when he’s fronted during his zone exits. His physicality gets a high grade for effort but Lambert isn’t consistently effective at separating opponents from the puck. Still, he will finish most of his checks with authority and shows no fear when heading into the corners. Lambert wins a ton of foot races when chipping and chasing, knowing full well that he’ll get hit within a second of puck retrieval.

The ability to make smart decisions on and off the puck is something Lambert has shown at every level, albeit with varying levels of consistency, depending on where he’s played. Therein lies the rub, as his hockey IQ — vision, creativity, anticipation, positioning, discipline, selflessness, routes, etc. — can fluctuate from elite to average to below average and then right back to elite, with examples of 60-minute dominance more the rule than the exception against his under-20 peers than when playing against men. In other words, Lambert has both the brains and skill to be the best player on the ice, and any stretch of SM-Liiga games that lacks scoring or significant scoring-chance generation doesn’t mean he’s invisible or ineffective. Again, this is a teenage center on the worst team in the adult-age SM-Liiga, and although JyP teammate and fellow 2022 draft-hopeful Joakim Kemell has been more than productive under the same constraint, it would be wise to allay concerns over Lambert’s weaker stats since he’s already pulled off impressive performance after impressive performance at the junior and international levels.