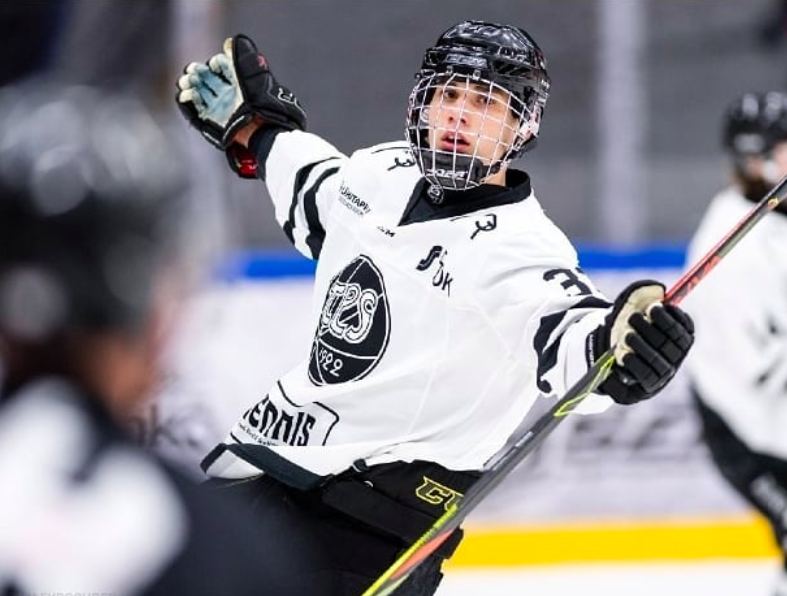 A hockey addict who excels on the ice and also in the classroom, Slafkovsky is widely considered to be the best Slovakian-born forward prospect since sniper Marian Gaborik went third overall in the 2000 NHL draft. The 6-foot-4, 218-pound power forward is a left shot who is listed as a center by NHL Central Scouting but has played either left or  right wing the entire season regardless of team or league. Built solidly but blessed with magical hands, creativity, and a high hockey IQ, Slafkovsky has already run the gauntlet of tough international competition and European league play. He has fast-tracked at every level and is a key figure in the expected resurgence of Slovakian hockey.

Dec. 15, 2021: Slafkovsky has been busy since last June, when he took a well-earned spot on Slovakia’s men’s team at the IIHF world championship (0 points, 14 shots in 6 games). He then dressed for the Slovak under-18 squad in early August for the Ivan Hlinka tournament (3 goals, 6 assists in 5 games) before he rejoined the men’s team a few weeks later for the 2022 Olympic qualification round (1 assist in 3 games). With TPS Turku in Finland, Slafkovsky has split the regular season between the under-20 SM-Sarja (6 goals, 12 assists in 18 games) and the elite SM-Liiga (1 goal, 3 assists, 51 shots in 24 games). It should be noted that the TPS A-Team is a perennial contender who ices the SM-Liiga’s best defensive team, but they also rank near the bottom in goal scoring. In December, Slafkovsky was named to Slovakia’s under-20 team for the 2022 world junior hockey championship, which will take place in Edmonton later in the month.

Slafkovsky is featured prominently on TPS U20’s top line, centered entirely by 2000-born pivot Kasper Koskinen and seeing the ice in all critical situations. Ice time has been harder to come by with TPS Turku’s senior team, as Slafkovsky began the season on the second line before he dropped down to a bottom-six role while being centered by either Aarne Intonen or Wisconsin-born journeyman Mitch Hults. Turku’s collective goal-scoring shortcomings can explain the line shuffling, and Slafkovsky deserves credit for generating shot attempts despite averaging under 13 minutes a game throughout most of the season.

Slafkovsky is an upright skater with average speed and occasional straight-line bursts that create separation. His attributes from a mobility standpoint are his quick feet, exceptional balance, and strong edgework both inside and out. Slafkovsky isn’t much of a breakaway threat and seems to understand that outpacing pressure will happen more by chance than from his skating ability. Nonetheless, Slafkovsky confidently drives the net via his powerful stride and leg strength, and he’s also capable of using devastating inside-out moves from within tight quarters, all while maintaining complete control during tight turns or any other directional changes. Any criticism of Slafkovky’s skating must be contextualized since his stickhandling, puck control, decision making, hands, and balance are already at an elite level, and he still creates time and space for himself.

Slafkovsky is a multi-tool threat from the wing, although a peek at his production and puck domination supports the idea that he can play center as well. Slafkovsky has produced more assists than goals by a 2-to-1 margin against each of the junior, senior, and international levels of draft-year competition. His skill set is diverse enough where he can pump seven to 10 shot attempts in one game, then deliver three primary assists the next. This kind of versatility helps explain his occasional usage as a point man on the power play, but one mustn’t overlook Slafkovsky’s goal-scoring prowess. He can create his own shot, unleash a deadly backhander to roof pucks from in tight, and jam the net-front area for deflection or rebounds. Slafkovsky also isn’t shy towards using the slapper and he will pick the corners from sharp angles as low as the goal line.

There aren’t many teenage forwards, let alone those standing at nearly 6-foot-4, who can distribute the puck as well as Slafkovsky. There’s artistry in his deliveries, and Slafkovsky’s short-distance passing game, specifically in traffic, is as close to all-star caliber as you’ll find. The quickness of his hands and the buttery-soft touch he displays make him the perfect option to entrust with zone entries and drive the possession thereafter. As already mentioned, Slafkovsky has played the point on the power play (usually on his off wing), and he can pass the puck onto his teammate’s blade in either basic or creative fashion. Slafkovsky’s linemates usually defer to him to execute and complete odd-man rushes, and he’ll use look-offs, shoulder or head fakes, and changes of paces to mask his intentions. These skills are more noticeable against junior-age competition than in the older SM-Liiga, but there’s no reason to think Slafkovsky won’t continue to enhance his playmaking as he gets older.

Slafkovsky isn’t shy towards using his thick frame to his advantage. He can and will deliver hard open-ice hits and is a menace in the net-front area, and his stick work can be effective, violent, and generally permissible under the rule book (Slafkovsky has been whistled for only six minor penalties in 35 games between his two club teams). Always willing to deliver a hit while pressuring the puck, Slafkovsky is an attentive forechecker who feverishly shoulder-checks while on the backskate all while keeping his stick blade fixed on the ice to block likely passing lanes. Although he rarely kills penalties and shouldn’t be viewed as a defensive stopper, Slafkovsky’s hands, active stick, and quick wits are effective at picking off centering or d-to-d passes for immediate up-ice transitions. He works hard both on and off the puck, and his reach can be a real difference maker.

Isolating on Slafkovsky reveals a highly intelligent player both on and off the puck. Examples of his understanding of the intricacies of hockey’s tactical and strategic elements are common throughout a given performance, with one of several instances being the controlled and decisive manner in which he attacks an open lane from a static position. He has exceptional on-ice awareness and usually limits his risk taking to situations in the offensive end. Even at such a young age, Slafkovsky has earned the trust of coaching staffs at multiple levels.