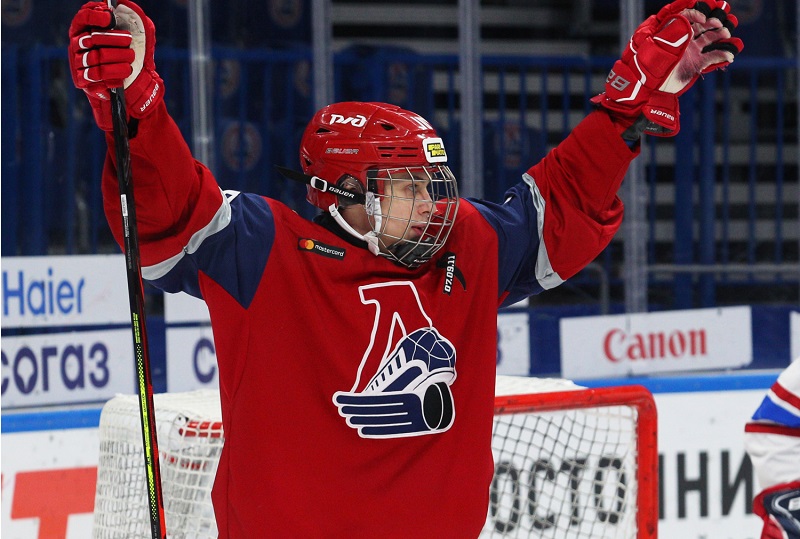 Players who love to show up to the rink every day can be easy to spot, especially when their desire to win takes priority over personal gain or hogging the spotlight. Perevalov is one of those prospects who want you to witness how serious they take the game, and that every shift is an opportunity for improvement while making life miserable for the opposition. He’s a deadly sniper, one who can out-think, out-wait, and outmaneuver defensemen and goalies with impressive results. But there’s far more to Perevalov’s game than just scoring, and his hounding, aggressive mindset plays a critical role in his ability to not only generate points but do so during lengthy chunks on the schedule. Regarded as one of the top forward prospects ever developed by Lokomotiv Yaroslavl, Perevalov could become the first top-10 pick ever drafted from their program

Nov. 10, 2022: Perevalov made noise at the under-18 Ivan Hlinka in helping Russia win the gold medal with five points (three goals, two assists), in five games. There he posted two multi-point efforts — a two-goal game and a goal and an assist in a semifinal win over Sweden in which he fired nine shots on goal in less than 15 minutes of ice time. Perevalov’s strong play at the Hlinka was followed by a white-hot start in the MHL, where he scored 27 points (13 goals, 14 assists) in his first 15 games, highlighted by an eight-game goal streak. Perevalov’s early-season scoring bonanza placed him among the league leaders in goals, points, and shot generation, thereby establishing himself as a reliable, multi-purpose scoring threat to serve on Loko Yaroslavl’s first line with 2002-born center Timur Akhunov and 2002-born right wing Stepan Steshenko.

Jan. 20, 2022: Perevalov’s scoring rate decreased considerably since mid-October, dropping from 1.80 points per game in hist first 15 games to 0.80 over the next 15. But he still registered a point in 25 of his 30 MHL matches thanks to point streaks of 10, six, and five games, and Perevalov is one of only twelve MHL shooters with 30 or more games and a shots-per-game average of 4.1 or higher. Although Perevalov was not invited to Team Russia’s under-20 camp for the world junior hockey championship, it’s a safe bet that he’ll be on each of Russia’s squads for the 2023 and 2024 tournaments.

In between his periods of MHL dominance were two brief KHL promotions to Lokomotiv, with whom Perevalov played sparingly but showed the same competitiveness and confidence against adults as he did against junior-age competition. The biggest takeaway from any of his four KHL games was that the veterans didn’t have reservations passing him the puck and allowed him to enter the zone on his own, looking quick and confident in the process.

Perevalov is an excellent skater with strong puck control and breakaway speed. His style is slightly hunched, but he takes a quick first step into a long, powerful stride that gets him into open ice well beyond a defender’s reach. Perevalov may not seem as explosive as fellow 2022 draft hopefuls Brad Lambert and Logan Cooley, but he constantly finds uncontested skating lanes by using a combination of pure speed, desire, and anticipation. Where Perevalov rates on the skating scale, however, should be considered more of a formality for scouting purposes rather than a skill that could make or break his career. Zip-tie his skates together and he’ll still find a way into open ice.

There is both deception and confidence in Perevalov’s short-distance maneuvers, and he will shift gears and shoulder-drop on his way to the net, or  execute a sudden directional change in a tight space when challenged by an aggressive defender. But as already mentioned, Perevalov is most dangerous is in open ice, as those opportunities present him with the option to either deliver a cross-ice strike on the tape or dangle or toe-drag his way into the middle of the ice, which is when you see his strong leg drive and edgework thwart attempts to knock him off balance. Perevalov rarely makes an unforced error or selfish play when controlling the puck in these situations.

Perevalov is a dual-threat with an elite shot and top-of-the-scale accuracy. He knows how good his shot is and doesn’t hesitate to use it. While most teenage shooters have yet to master the art of getting open, Perevalov seems to possess an acute sense of the space available before him, and he times his movement into shooting areas with the exact moment an opponent releases from coverage. Being blessed with soft hands and a quick release affords Perevalov’s teammates the comfort of knowing they don’t always need to feed him pucks flat and on the tape, and his veteran-level puck savvy quintessential “scorer’s touch” has made him a primary target on the power play. Perevalov is a consistent point producer, one who rarely has an off day. This can be attributed to his fantastic awareness and reaction timing near the goal, especially during odd-man rushes when he routinely sells the opposition into a state of confusion.

Perevalov’s scoring strength lies mostly on his goal-scoring ability, but he is an accurate passer who will exploit open passing lanes anywhere on the ice, including off the rush. His cross-seam and cross-crease feeds are on the tape, but he keeps goalies honest by whipping sharp-angle shots towards the upper half from as far down as the goal line. Perevalov’s creativity is more visible in his shot selection than with his passing, but he still finds a way to deliver the puck with accuracy whether his intentions are telegraphed or not.

Perevalov is one of the best 200-foot forwards available in the draft, and an argument can be that made that his 1-on-1 defensive play is unmatched within his year group. His competitiveness keeps him involved in plays deep into shifts, with plenty left in the tank to spearhead a counterattack. There will be times when Perevalov may appear to be cherry picking, but these scenarios lean more towards an anticipation of a possession change and potential breakaway opportunity rather than avoiding contact or skirting hard work, which is never the case with him.

Loko Yaroslavl paired him with Akhunov on the lead penalty-killing unit, and the duo showed consistent chemistry, active stick work, and proper spacing. Their aggressive shifts while down a man also resulted in several odd-man rushes and short-handed goals. In terms of physicality, Perevalov has a sturdy 190-pound frame and he does not shy away from contact. He occasionally throws his weight around, mostly when his team needs a jolt or momentum needs shifting, and his quick turns and constant shoulder checking usually keep him within striking distance to create or collect a turnover. Always willing to attack into neutral-zone traffic and take a hit to complete a play, Perevalov is a fearless competitor who can play with bite. Opposing defenseman on breakouts have to be wary of Perevalov’s long reach and stick-lifting proclivity.

Perevalov’s high-level decision making coupled with his serious on-ice demeanor paints him as a coachable student of the game. His strong desire to win appears selfless, as Perevalov consistently puts himself in position to support his teammates and do the hardest work on a given shift. Loko Yaroslavl is a perennial MHL powerhouse with a seemingly endless amount of organizational depth, which adds context the significance of the 17-year-old Perevalov’s promotion to their top line, and lead power-play and penalty-killing units. Even in his brief KHL stint, Perevalov proved his worth beyond scoring by hustling and properly reacting to puck travel with smart neutral-zone reads.