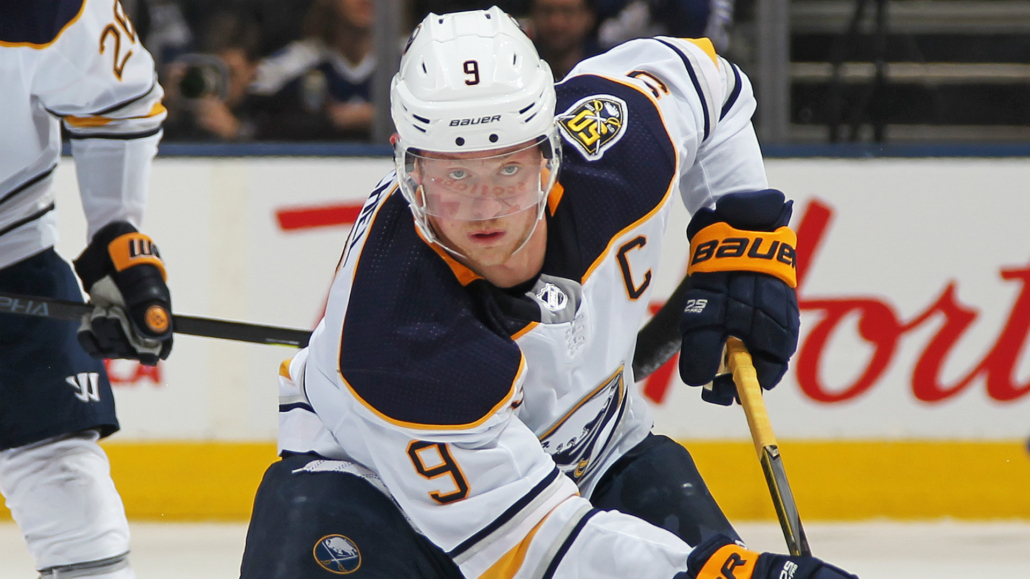 NASHVILLE (The Draft Analyst) — The Vegas Golden Knights, desperate to keep pace with the Western Conference elite amid a rash of early-season injuries, ended months of speculation by acquiring embattled center Jack Eichel from the Buffalo Sabres.

Eichel, the 25-year-old star who captained the Sabres since 2018, had led them in scoring every season between 2017 and 2020 but has been out with a neck injury since March 7. The Sabres are off to a 5-4-1 start without Eichel in the lineup but have not made the playoffs since 2011. A public disagreement between Eichel and Sabres executives over surgery options for the herniated disc in his neck appeared to have fractured the relationship between Eichel and the front office, which in turn kickstarted months of trade talk that reached a crescendo this week.

In return for Eichel and Buffalo’s third-round draft pick in either 2023 or 2024, the Sabres received injured power forward Alex Tuch, also 25, along with blue-chip center prospect Peyton Krebs, a conditional first-round pick in the 2022 draft (top-10 protected), and a conditional second-round selection in 2023.

Neither Eichel nor Tuch are expected to return to action until the second half of this season.

Championed as the savior who would elevate the Sabres from the gutter, Eichel’s tenure in the Queen City was marginal at best. Buffalo failed to make the postseason in any of his six seasons and never placed higher than sixth in the Atlantic Division. Although Eichel led the team in scoring in every campaign between 2017 to 2020 and notched a career-best 82-point season in 2018-19, he was more of a power-play specialist than a consistent producer — Eichel’s 1.90 points-per-60 minutes average at 5-on-5 ranks only 66th among the 253 forwards who appeared in 300-plus games since his debut. Compounding the issue is that Eichel is one of only nine forwards in the league with an annual cap hit of $10 million or higher. To say the Sabres went nowhere with Eichel would be an understatement, and a strong argument can be made that his six years in Buffalo were the worst in franchise history. They’ve owned the league’s worst record since 2015-16 and never eclipsed the .500 mark in points percentage in any of Eichel’s six seasons — the longest stretch of such futility since the Sabres joined the league in 1970.

Should the blame be placed squarely on Eichel’s shoulders? Absolutely not, and anyone who followed the Sabres during the Jack Eichel years knows he was the franchise’s most excitable (and marketable) skater since Pat Lafontaine some 30 years earlier. He played hurt, helped mentor younger players, and was the team’s lone standout on most nights. But mounting losses magnified Eichel’s few shortcomings, and his off-ice spat with management regarding his neck injury made the prospect of letting him go elsewhere a reality that Sabres fans were forced to accept.

The condition surrounding this pick looks weird at first, but it actually makes sense. If the Golden Knights keep their 2022 first-round selection (the one that’s top-10 protected), then Buffalo gets a 2023 first rounder and send Vegas its third-round pick in 2024 instead of 2023. What this condition does is ensure the Golden Knights have at least two picks in the first three rounds in both 2022, 2023, and 2024. Keep in mind that an added third-round pick from Buffalo is significant because the Sabres have been perennial doormats, meaning the chances are high that the pick will likely land at or near the top of the third round, which essentially makes it a late second rounder.

It sure seems likes Vegas has been leaking draft picks and prospects for the last two or three years, but the situation surrounding its pipeline is far from critical. The Golden Knights have averaged eight draft selections per year since 2017 while maintaining contender status, and as of now they have at least six picks in each of the next three drafts, including two first rounders, two second rounders, and now four third rounders. 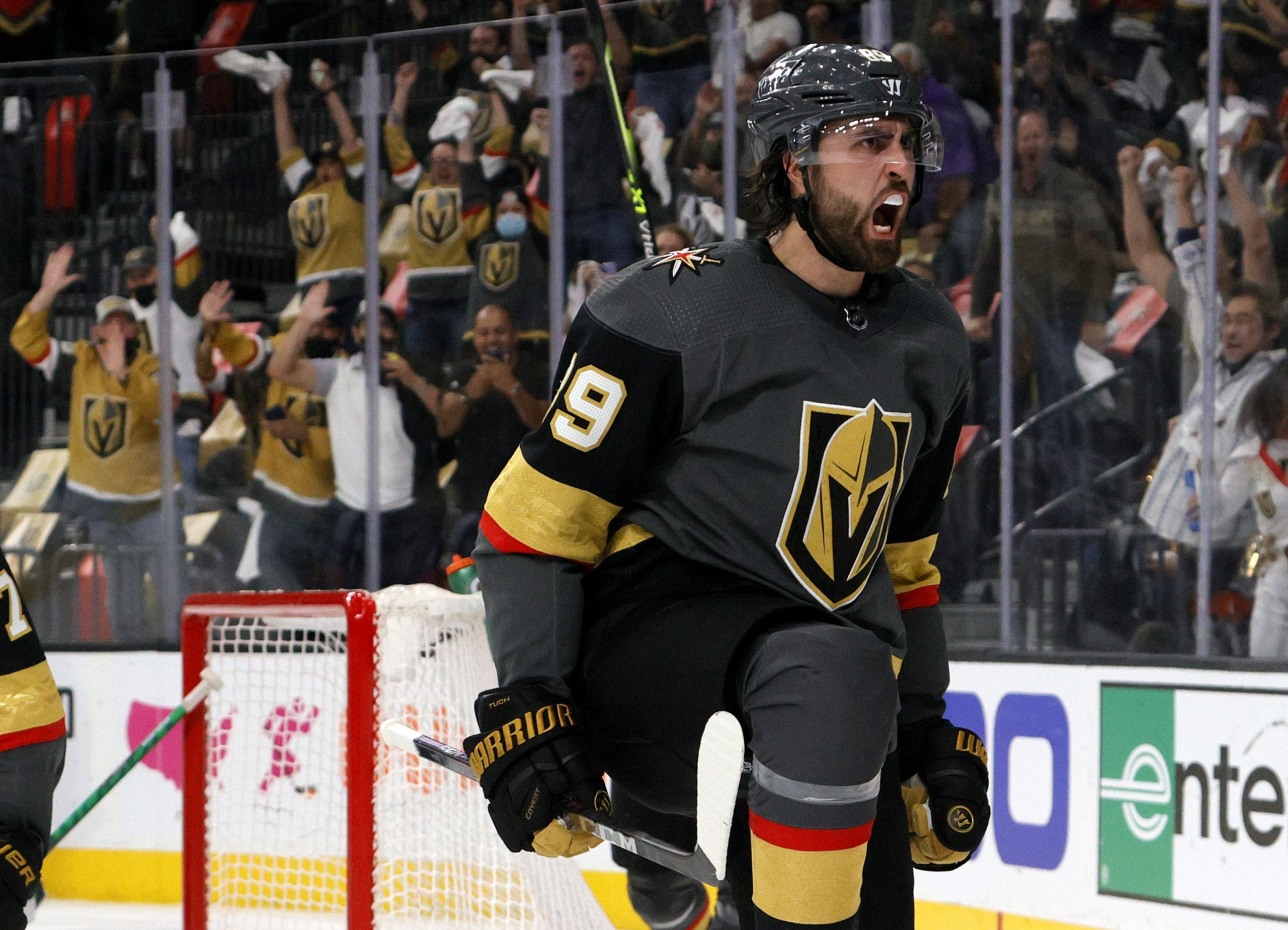 Acquired from Minnesota in the 2017 expansion draft, Tuch is a battle-tested power forward and middle-six winger who played a key depth role for the contending Golden Knights. He’s a right shot who plays right wing and is used on the second power-play unit, although 81 percent of Tuch’s career production (112 of 130 points) came away from the man-advantage. In terms of usage and defensive play, Tuch rarely kills penalties (44:49 of short-handed ice time in 249 games) but creates havoc on the forecheck with his speed, long reach, and physicality, and he can play an in-your-face game without taking unnecessary penalties. Playing for a perennial powerhouse like Vegas limited his opportunities to play top-six minutes, and the Golden Knights’ top two lines featured established scorers like Mark Stone, Max Pacioretty, Jonathan Marchessault, and Reilly Smith. But Tuch was used in the top-six on occasion, including a brief stint as a top-line center in last year’s playoffs.

Although Tuch’s raw production has see-sawed from year to year, he rewarded his coaches by increasing his scoring and shot generation with more ice time — his best per-game rates in points (0.73), goals (0.46), and shots (3.05) have come in the 41 career games Tuch played between 18 and 20 minutes. Of course, it goes without saying that Syracuse native will never be Jack Eichel or come close to matching his 70-80 point seasons. But Tuch is a tough out who plays the game hard and has the makeup and big-game experience (19 goals in 66 playoff games) to handle the pressure of replacing an icon while producing respectable numbers in the process. He’s missed the start of the 2021-22 season with a shoulder injury and isn’t scheduled to return to NHL action until January or February. 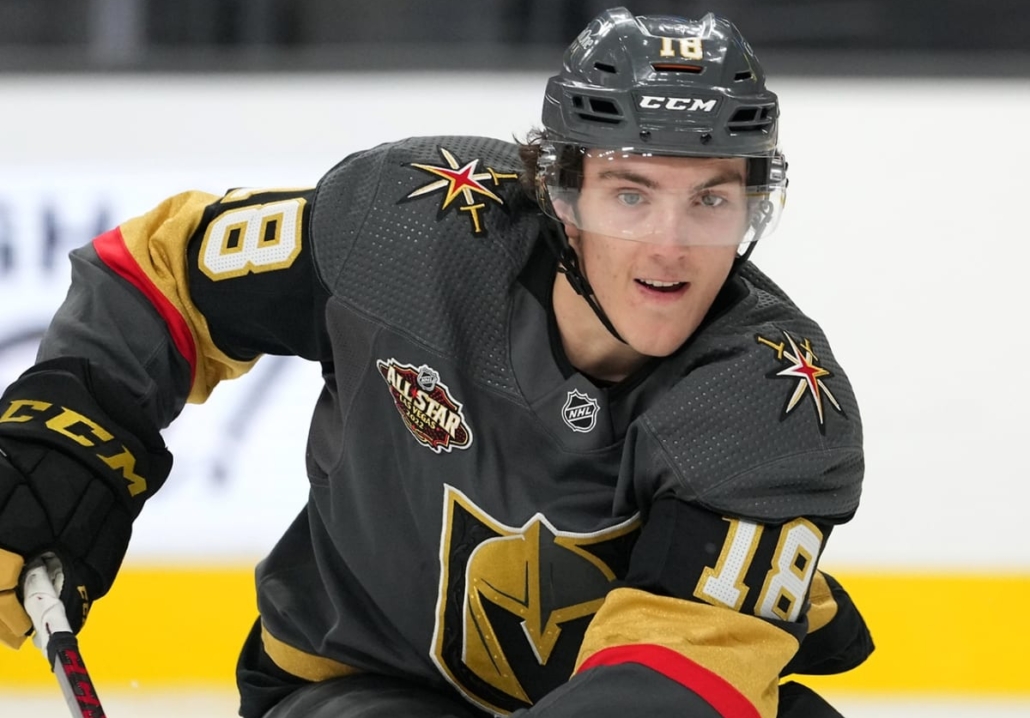 Krebs was the top prospect in the Vegas pipeline after a stellar junior career with Winnipeg in the Western Hockey League. He’s represented Team Canada at every major prospect tournament, where he was utilized in a two-way role and played in all situations. A pure playmaker and on-ice leader who in 2019 was expected to go high in a deep draft, Krebs suffered a freakish skate-cut injury that severed his Achille’s tendon and likely knocked him out of the top 10 before Vegas grabbed him at 17th overall.

Krebs has dominated the Canadian major junior circuit since, and has appeared in nearly double the number of NHL games (13) to AHL matches (7), including all nine of the Golden Knights’ games through Nov. 3.  Although Vegas has one of the strongest collections of center prospects in the league, Krebs up to this point was the best they had.

The Sabres now own three first-round picks in the 2022 draft, in addition to one pick in each of the other six rounds. Barring any future deals, this will mark the third time in the last four years where Buffalo will have multiple first-round draft selections. The first-rounder acquired in Thursday’s deal with Vegas is top-10 protected, which is critical since the banged-up Golden Knights currently rank 27th overall. Their list of casualties now includes Eichel, whose return date remains unconfirmed until he undergoes neck surgery.

Therefore, it’s conceivable that Vegas could be out of a playoff spot by the time the lineup is close to 100 percent, albeit in the weaker Western Conference. If the Golden Knights miss the postseason and draw a top-10 slot via the draft lottery, they keep their 2022 pick, which could be great news for the Sabres since Vegas is thereby forced to surrender an unprotected first-rounder in the stronger 2023 draft, which could offer Buffalo multiple cracks at near-generational prospects Connor Bedard and Matvei Michkov. Although it’s doubtful a perennial contender like Vegas will finish near the bottom of the standings in consecutive seasons, NHL history is awash with examples where these types of deals backfire on the teams who traded away a high draft pick for a star player.

The conditional 2023 second-round pick included in Thursday’s haul cannot become another first-rounder. Rather, the condition simply gives the Golden Knights the ability to keep that pick and send to Buffalo a 2024 second-rounder instead, but only if Vegas is a top-10 lottery team in 2022. Basically, it prevents the Golden Knights from being without a pick in each of the first two rounds in the vaunted 2023 draft.

Like most blockbuster deals involving star players, the trade that ended the Jack Eichel era in Buffalo isn’t ripe for a final verdict. Yes, the Golden Knights have Stanley Cup aspirations while the Sabres just want to make the playoffs. But Vegas clearly takes it hunger for a championship as serious as any franchise in the league, which is whey they were willing to part with their best prospect (Krebs) and also assume Eichel’s annual $10 million cap hit — career-threatening injury and all. And as much as Eichel has publicly stated his longing for playoff hockey, the pressure and disappointment of failing to carry the Golden Knights to a Stanley Cup should be no different from the backbreaking weight he carried around Buffalo during the Sabres’ six abysmal seasons without making the playoffs.

Nevertheless, this deal was unique in that the centerpiece return for both teams — Eichel to Vegas and Tuch to Buffalo —  is on a long-term injured list. The upstart Sabres are 5-3-1 without Eichel, but they still have a long way to go before talk of ending a 10-year playoff drought can be taken seriously. A healthy Tuch and his penchant for clutch play could tip the scales in their favor come April, but the strength of the Atlantic Division (and the rest of the Eastern Conference for that matter) makes it reasonable to expect rebuilding Buffalo to miss the playoffs in 2021 but continuing with this long-game strategy that should pay huge dividends in the near future.