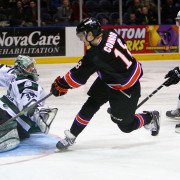 Kyle Connor
Position: Left Wing / Center
Shoots: Left
Height/Weight: 6’1″ 180 lbs
Born: December 9, 1996, Clinton Township, MI
Central Scouting Rankings (Prelim/Mid/Final):  “A” / 14th NA / 13th NA
Summary: Pre-draft talk about Connor being a sure-shot lottery pick dissipated in a Boston minute after the B’s went off the board with all three of their first rounders, leaving the Jets the prime opportunity to snag who we feel was in fact a lottery talent. He’s wiry and elusive, but the playmaking and finishing skills are most certainly elite. Heis an excellent playmaker, specifically on the power play, as he can deliver both hard and soft accurate passes from either his forehand or backhand. Connor doesn’t like to rush things either. He’s very calm under pressure and maintains the same compete level, and he uses excellent stickhandling skills to maintain possession and keep his options open. One of his many attributes is the way he kills penalties; he’s like a shark and can telegraph passes while using a very active stick. Very smart player who uses his head the whole game. Although he hasn’t filed out yet and should not be classified as a physical forward, he still takes the puck to the net and has shown courage in taking the puck across neutral zone danger areas.  Connor possesses a strong and diverse skill-set translatable to the NHL. Simple case of the talent-rich Jets getting richer, only the Michigan-bound Connor has a real chance at being in the NHL sooner than you might think. 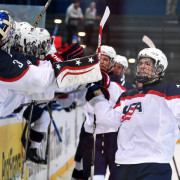 Jack Roslovic
Position: Right Wing
Shoots: Right
Height/Weight: 6’1 183 lbs
Born: January 29, 1997, Columbus, OH
Central Scouting Rankings (Prelim/Mid/Final): ”B“/ 52th NA / 39th NA
Summary: Jets went off the board to take a steady riser in Roslovic, but the truth is he should have gone a bit lower if we’re basing things on both resume and NHL upside. Make no mistake — Roslovic is a bonafide sniper. And if there is one team out there who could have went into this draft with a guns-a-blazing strategy, it’s definitely the prospect-heavy Jets. Still, we think Roslovic is still too rough around the edges and racked up a lot of points playing on potential 2016 first overall pick Auston Matthews’ flank. Once relegated to a support role on the National Team Development Program, Roslovic changed his fortunes by being less passive and far more the hunter rather than the hunted. Blessed with excellent straightaway speed and playmaking abilities, his proficiency at scoring goals was showcased on a nightly basis. His bread and butter is passing the puck, which for a while was all he did. Now we know he can not only wire it, but be elusiveness enough to find those areas where the probability of scoring multiplies. Roslovic has an excellent release and requires little backswing to get velocity on his shots. If he fills out more, he can be classified as a competitive power forward who can do a ton of damage off the forecheck since he has excellent vision and passing abilities. His situation is similar to Kevin Hayes in that his size and new-found goal scoring prowess now classifies him as a goal-scoring winger, when in actuality he’s more of a pass-first playmaker who can play the pivot. 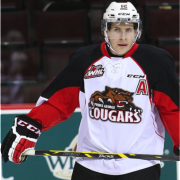 Jansen Harkins
Position: Center
Height/Weight: 6’1 lbs 185 lbs
Shoots: Left
Born: May 23, 1997, Cleveland, OH
Central Scouting Rankings (Prelim/Mid/Final): ”A“/ 18th NA / 15th NA
Summary: Very surprising Harkins was overlooked by several teams with multiple first round picks, including the Jets, who were lucky enough to snag him in the middle of the second. Harkins isn’t a flashy player, but falling out of the first round was something the Jets are obviously pleased with. We studied this kid’s season from start to finish without finding a flaw or two damaging enough to drop him. But sometimes that’s just the way the ball bounces, and in this case, right into the Jets’ lap. He essentially carried Prince George’s offense after it was beset by graduations, producing a team-best 77 points — 10 more than the next highest Cougar and 25 more than the third. He has a tremendous understanding of the game on several critical levels; specifically playmaking, defensive zone coverage and backchecking. Harkins is deceptively dangerous with the puck; he is not a graceful player, nor will he wow you with slick moves or magical passes. He seems to do everything the right way: clean, safe, hard nosed and determined. Harkins is a leader on the ice who possesses a strong desire to win. He has excelled in physical, grind-it-out games by winning his puck battles and recovering loose pucks to set up scoring chances. If something good was cooking in Prince George’s offensive end, there was a good chance Harkins was involved in it – he finished tied for 6th in the entire WHL with 35 primary assists. Overall, he’s one of the top draft-eligible defensive forwards. The consistent offense he provides is simply the French butter cream on a gourmet cake. Even his U18 performance was solid – three goals and five points in seven games – despite being the third line center behind Mitchell Stephens and Mathew Barzal. His skating is above average, but his deliberation while controlling the puck on the rush should not be classified as an inability to beat his man up the ice. Rather, he’s controlling the situation and assessing how defenders and teammates are/should be positioned. That being said, he’s not going to wow you with speed or highlight-reel skill. Everything else he does, however, is done at an elite level.

Erik Foley
Position: Left Wing
Height/Weight: 6’0, 185 lbs
Shoots: Left
Born: June 30, 1997, Norwood, MA
Central Scouting Rankings (Prelim/Mid/Final): “B”/ 57th NA/ 51st NA
Summary: Selected right around where most had him going, the Providence-bound Foley is in intriguing prospect in that he’s got a nonstop motor, physicality and a great shot, but developing into a top-six winger with consistency may be a bit of a reach. Give him a tape-to-tape playmaker and he’ll get you some goals, but he can get frustrated and certainly lets it show. Our issues with Foley center on him winning so many puck battles but making poor decisions thereafter. Creativity and vision at this stage of his development are two aspects he’ll likely never provide for Winnipeg, but as he bulks up and becomes more of a power forward, he’ll continue to find ways to contribute.

Michael Spacek
Position: Center
Shoots: Right
Height/Weight: 5’11, 187 lbs
Born: April 9, 1997, Marianske Lazne, Czech Republic
Central Scouting Rankings (Prelim/Mid/Final): “A”/ 4th Eur/ 5th Eur
Summary: Unselfish, two-way Czech puck distributor who rarely makes mistakes when he’s creating in the offensive end. Had 12 points in 40 games as the youngest player on Pardubice’s Extraliga team, so don’t expect him to get rattled in the face of stiff competition. We really like this pick for the Jets, even if he fell a good round or two for our liking. And although there is still no confirmation at press time whether or not he’ll play in Red Deer next season, he’s far too skilled to let a change in scenery impact his style of play.

Mason Appleton
Position: Center
Shoots: Right
Height/Weight: 6’2, 193 lbs
Born: January 15, 1996, Green Bay, WI
Central Scouting Rankings (Prelim/Mid/Final): NR/ NR/ NR
Summary: Late-bloomer who went undrafted a year ago but emerged as a star for Tri-City (USHL) thanks to a late-season surge. Appleton, a Wisconsin native who is committed to Michuigan State University, is a bit of a rarity in that he’s going to hit over 200 pounds and plays physical but is a pass-first kind of playmaker.The Jets will have to patient with a low-risk, high-reward pick like Appleton since he’s still learning the nuances of playing as a power center. But isn’t that’s what you want out of your later picks? Pay a bit more attention to his development than most late-round types because we see some serious potential there.

Sami Niku
Position: Defenseman
Shoots: Left
Height/Weight: 6’0, 176 lbs
Born: October 10, 1996, Jyvaskyla, Finland
Central Scouting Rankings (Prelim/Mid/Final): “C”/ 59th Eur/ 56th Eur
Summary: Niku’s had some impressive showings on the international circuit but you just wish he’d have more confidence and stability in his own end. He’s a very smart once the puck is on his stick heading up the ice, but he consistently gets caught chasing, and his stick is generally in the wrong position on both shot and pass attempts against. Offensive contributions are going to be his meal ticket if he wants to make an impact on North American rinks, but we just didn’t see the kind of improvement from a year ago to warrant much of a fuss. Niku’s a seventh round pick so you can’t be too upset over the Jets picking an offensive rearguard, who may get better in his own end as he gets stronger.

Matteo Gennaro
Position: Center
Shoots: Left
Height/Weight: 6’2, 187 lbs
Born: March 30, 1997, St. Albert, AB
Central Scouting Rankings (Prelim/Mid/Final): “C”/ NR/ 127th NA
Summary: Prince Albert center who almost played himself out of draft potential with a disastrous first half before going finally going on a tear. He’s got potential to be a very solid depth center but should certainly be groomed to have involvement in offensive situations. Gennaro is a very good skater and a sound decision maker off the rush, so pairing him with creative finishers will probably yield better results than if he was expected to be the one to create the high-quality scoring chance.