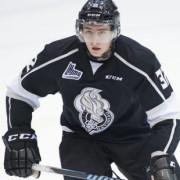 Yakov Trenin
Position: Center/Left Wing
Shoots: Left
Height/Weight: 6’2, 194 lbs
Born: January 13, 1997, Chelyabinsk, Russia
Central Scouting Rankings (Prelim/Mid/Final): ”B“/ 50th NA/ 48th NA
Summary: The Pavel Datsyuk of the Quebec League. Well, more like a poor man’s Datsyuk, but a solid two-way center/wing with size nonetheless. Trenin, who was one of the QMJHL’s top rookie point producers, is a perfect example of succeeding by being a quick thinker rather than a quick skater. Of course, you wish he could be both, as his skating is something that may hinder his chances. Still, Trenin is a top-notch playmaker who can be used in all on-ice situations whose game is comparable to Derek Stepan’s. 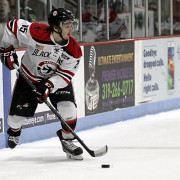 Tom Novak
Position: Center
Shoots: Left
Height/Weight: 6’0, 179
Born: April 28, 1997, St. Paul, MN
Central Scouting Rankings (Prelim/Mid/Final): “A”/ 29th NA/ 28th NA
Summary: One of the draft’s few meteroic fallers, Novak, who was once tabbed as a first round prospect, had a solid season for Waterloo centering first rounder Brock Boeser after dominant international performances at the World Junior “A” Challenge and the Hlinka. Why did he drop to the back end of the third round despite elite playmaking and scoring abilities? First, he didn’t have a good showing at the combine after already being tagged as the kind of player who doesn’t compete as hard as he should. Accurate assessments of not, those alleged shortcomings should not detract from his elite-level playmaking and decision making in the offensive zone. Novak is most certainly a one-dimensional offensive forward, but take into consideration he’s pretty close to dominant at that dimension.

Anthony Richard
Position: Center
Height/Weight: 5’10, 163 lbs
Shoots: Left
Born: December 20, 1996, Trois-Rivieres, QC
Central Scouting Rankings (Prelim/Mid/Final): “C”/ 103rd NA/ 77th NA
Summary: Tremendous skater and a pure offensive machine for the Val-d’Or Foreurs, Richard, ,who was tied for 10th in the QMJHL with 91 points in 66 games, is a dependable playmaker who gets a bad rap for not being physical enough and failing to keep his emotions in check. If the Preds chalk that up to simply being young, they can justify taking a shot of one of the draft’s best scorers.

Alexandre Carrier
Position: Defenseman
Height/Weight: 5’11, 174 lbs
Shoots: Right
Born: October 8, 1996, Quebec, QC
Central Scouting Rankings (Prelim/Mid/Final): “B”/ 60th NA/ 89th NA
Summary: Gatineau’s superb puck mover and distributor who led all QMJHL defensemen with 35 primary assists. So why the low selection? His trouble with speedy forwards in the Q makes you wonder how in the world he’ll handle the big boys who get paid millions to do the same thing. Still, Carrier has leadership qualities both on and off the ice and is a mature young man who doesn’t lose his cool when the pressure’s on. Home run swing by Nashville as he could turn out to be one of the top offensive blueliners this draft produces.

Karel Vejmelka
Position: Goaltender
Catches: Right
Height/Weight: 6’4, 200 lbs
Born: May 25, 1996, Trebic, CZE
Central Scouting Rankings (Prelim/Mid/Final): NR / 15th Eur/ 14th Eur
Summary: When Nashville takes a goalie in the later rounds, people listen. Vejmelka is a towering yet nimble netminder who catches with his right but his strengths are easily his exceptional rebound control and quickness. He was passed over in 2014 as a late birthday and was subsequently cut from the Czech squad for the 2015 WJC’s, but you can say he sort of made up for the snub out with a solid seven-game stint in the Extraliga (.922 save percentage).

Tyler Moy
Position: Center
Catches: Right
Height/Weight: 6’1, 195 lbs
Born: July 18, 1995, La Jolla, CA
Central Scouting Rankings (Prelim/Mid/Final): NR / NR/ NR
Summary: A converted defenseman, Moy anchored Harvard’s third line for the better part of last season while serving in a checking/shutdown role. He’s got an NHL build and skates very well, and is a good possession option since he’s generally an accurate passer and can wear down defenders during cycles and battles along the wall. His limited offensive abilities, however, will keep him stapled to the bottom six, where he should find his niche.

Evan Smith
Position: Goaltender
Catches: Left
Height/Weight: 6’6, 174 lbs
Born: February 27, 1997, Parker, CO
Central Scouting Rankings (Prelim/Mid/Final): NR / 18th NA/ 23rd NA
Summary: Smith’s season started off somewhat well but was derailed by an unfortunate knee injury in October after he was challenging Royals’ struggling starter Coleman Vollrath. His brief stint with Victoria depicted him as an inconsistent goaltender who seemed somewhat unprepared to face the onslaught of chances from the Dub’s skill players. When he finally earned a start, Smith looked more confident, and you could see how his imposing silhouette got into the heads of opposing players. Following knee surgery, Smith resumed his season with Austin (MN) of the NAHL where he expectedly dominated. Like most young goalies, however, he’s incredibly raw in terms of tracking the puck, reading plays and when and when not to challenge shooters. For now, he should be expected to return to Victoria and challenge for the starting job he could have secured a year ago.