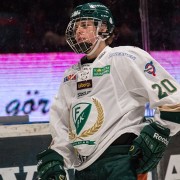 Joel Eriksson Ek
Position: Center
Shoots: Left
Height/Weight: 6’2, 180
Born: January 29, 1997, Karlstad, Sweden
Central Scouting Rankings (Prelim/Mid/Final): “B”/ 22nd Eur/ 4th Eur
Summary: Eriksson Ek has exceptional scoring touch for a kid whose numbers reflect his relegation to fourth line center duty after a mid-season promotion to Sweden’s senior circuit. Eriksson has very quick hands and can be an excellent finisher in scoring areas. While he has the reputation of a defensive center, Eriksson has certainly made the most of his role when its expanded. He is very tricky with the puck and his ability to make plays despite a high degree of difficulty makes him a danger at all times on the ice. He isn’t the most physical presence, nor does he use his size during puck battles the way you’d like him to, but he is a very hard worker and earns his money on every shift. He is a very good skater with a long fluid stride but lacks explosiveness. Eriksson’s one of the best two-way players in the draft, as helped by his gaudy SHL faceoff stats despite being only 17. He can be used in all game situations and in true Swedish fashion, likes to provide offense while on the penalty kill.

Jordan Greenway
Position: Left Wing
Shoots: Left
Height/Weight: 6’5, 222
Born: February 16, 1997, Canton, NY
Central Scouting Rankings (Prelim/Mid/Final): “A”/ 22nd NA/ 47th NA
Summary: One of the draft’s biggest bodies also possesses a soft set of hands and playmaking ability. The Boston University-bound winger is a tough matchup for anybody. He’s been criticized for being inconsistent, but the nature of his position and style of play as a power forward will generally provide production and engagement in spurts. When he’s on, however, he’s a dynamic combination of strength and skill. He developed a bit of a pass-first mentality on the stacked NTDP, but when he’s paired with a playmaking center, he knows what to do with the disc.

Ales Stezka
Position: Goaltender
Catches: Left
Height/Weight: 6’3, 178
Born: January 6, 1997, Liberec, Czech Republic
Central Scouting Rankings (Prelim/Mid/Final): NR/ 9th Eur/ 4th Eur
Summary: He may have been Daniel Vladnar’s backup at both the U18’s and the Hlinka, but this Czech netminder showed a lot of athleticism in his few starts. One could say he outperformed Vladnar is both tournaments. He’s a traditional play-it-safe netminder but possesses a very quick glove hand and his lateral quickness sets him apart from most of his European peers. He’s headed to the USHL to play for Sioux Falls this season.

Kirill Kaprizov
Position: Left Wing
Shoots: Left
Height/Weight: 5’10, 184
Born: April 26, 1997, Novokuznetsk, Russia
Central Scouting Rankings (Prelim/Mid/Final): NR/ 61st Eur/ 29th NA
Summary: The KHL’s top pick in their 2014 draft,  Kaprizov tore up the 2014 Hlinka and was one of Russia’s better players at the U18’s despite being injured. He’s a fierce competitor and possesses world-class stickhandling skill on par with fellow 2015 draftees Mitch Marner and Jeremy Bracco. And while his foot speed is far from world class, he’s very quick  and shifty during the grind-it-out game, and will even use the body to successfully separate opponents from the puck. He’s already got a year of KHL time under his belt, so the lure of North America should reach a crescendo within the next two or three years.

Nick Boka
Position: Defenseman
Shoots: Right
Height/Weight: 6’0, 197
Born: September 8, 1997, Commerce, MI
Central Scouting Rankings (Prelim/Mid/Final): “C”/ 176th NA/ 116th NA
Summary: Michigan committ who played for the NTDP can play a very physical game and wins his board battles. Have very good mobility but needs more confidence in using it. We felt he should have gone much higher when you consider his production and responsibilities were limited by playing in the NTDP’s forward-centric system. In going to Michigan and playing for Red Berenson, Boka is expected to flourish and provide more offense, especially if and when Wolverine standout Zach Werenski signs a pro contract.

Gustav Bouramman
Position: Defenseman
Shoots: Right
Height/Weight: 5’11, 184
Born: January 24, 1997, Stockholm, Sweden
Central Scouting Rankings (Prelim/Mid/Final): NR/ 68th NA/ 75th NA
Summary: Likely shielded by the Soo’s ridiculously deep lineup, Bouramman is a very skilled Swedish import who had to acquiesce to CHL-leading blueliner Anthony D’Aneglo on most offensive opportunities despite sharing power play time together. The defensive positioning and puck management skills are most certainly works in progress, and he gets pushed off the the puck too easily. But he’s a the type of top-four two-way project the Wild will be patient with considering the depth and age of their NHL defense corps.

Jack Sadek
Position: Defenseman
Shoots: Right
Height/Weight: 6’2, 185
Born: April 19, 1997, Lakeville, MN
Central Scouting Rankings (Prelim/Mid/Final): “C”/ 83rd NA/ 79th NA
Summary: Could have (and maybe should have) been first defenseman to win Minnesota’s Mr. Hockey since Nick Leddy in 2009. Great combo of smarts and speed, Sadek will be a Golden Gopher next season. We had him slotted to the Wild in our mock but a lot higher than one of the final picks in the entire draft. Sadek is a confident puck rusher and can even play with a “point forward’s” mentality, but he should still be considered raw. Expect him to be groomed as the Gophers’ power play quarterback of the future.