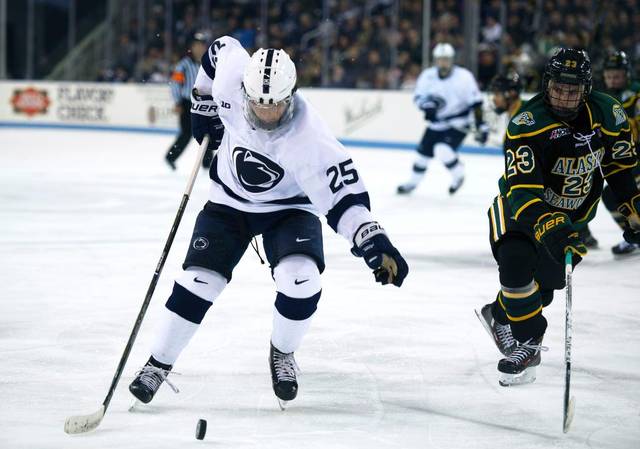 Crafty, feisty undersized forward with speed and exceptional puck skills who took the NCAA by storm, leading all freshman in scoring with 47 points. Born in Moscow before emigrating the U.S. as a child, Smirnov was a prolific point producer in the USHL in each of his first two looks for the draft. He’s certainly got everyone’s attention now, not only for being the top NCAA rookie, but also for playing a key role in Penn State hockey winning its first Big-10 title — Smirnov was voted both Team MVP and Top Freshman. He’s a dangler, deker and head-faker who can beat you with his vision or his shot, and he’s an absolute beast in one-on-one scenarios. Smirnov is one of those possession wizards who can slow the game down and keep the puck on his stick from the beginning of a shift until whenever he feels like getting rid of it. His game has matured quite well, especially in a North American setting, and he incorporates all four teammates into the attack. If there’s blood in the water, Smirnov becomes a deadly hunter who makes opponents pay dearly for their mistakes. He crossed over the pond from Russia a while back, and even played with Philadelphia Flyers standout defender Ivan Provorov for the bantam-level Wilkes-Barre/Scranton Junior Knights.

This goal was all Denis Smirnov who now has 44 points on the year as Penn State goes up 2-0 pic.twitter.com/smz7DfPMzZ