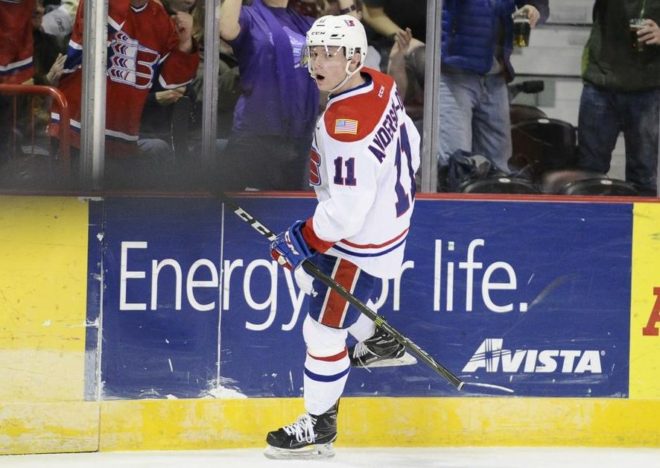 Cerebral goal-scoring pivot with an excellent shot who bounced back from an early-season cut from Team Canada’s Hlinka squad to produce one of the better seasons of any CHL draft eligible. He played a bunch with likely first rounder Kailer Yamamoto, and while there is some truth to the idea the former benefited from the latter, Anderson-Dolan’s impact on the line, especially on the power play, shouldn’t be overlooked. He’s a very good skater with an aggressive mindset, but he is quite capable at executing a controlled zone entry over a dump-in. Anderson-Dolan is nimble and can cover ground, especially on the forecheck, and he requires only two or three steps to gain separation from the player shadowing him. A lackluster U18 world championship likely slows down the hype train, but it was Anderson-Dolan’s keen vision, defensive prowess and intangibles that helped his linemates have freedom of movement. Plays a game similar to the New York Rangers’ Derek Stepan.

Jaret Anderson-Dolan shows why he’s on some #NHL teams radars for this years draft, as he uses his speed to create a scoring chance. pic.twitter.com/OilGSsYW28