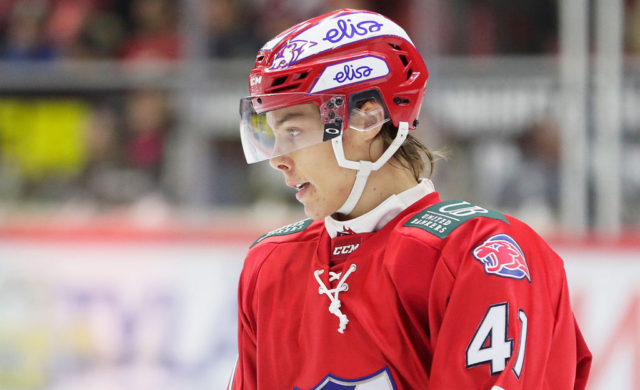 You can make a strong case for Heiskanen being the draft-eligible defenseman with the shortest path to the NHL, especially when you consider the big minutes he logged for IFK in the Finnish Liiga. He’s a cerebral puck mover with above-average speed who is rarely caught out of position, and he accumulates shots and chances by aggressively dropping down well below the dots.  Heiskanen is a very good outlet passer and plays with poise, but his impeccable positioning, especially on the penalty kill, is just one of the many reasons why he was entrusted with critical situations despite being one of the youngest players in Finland’s top league. Both his wrister and slap shot are hard and accurate, and he comes across as the kind of defender who will look to pick a corner or go five hole rather than blast the puck and pray, especially as he moves closer to the net. Heiskanen is strong with his footwork — cutbacks, pivots, edges, etc. — and he is capable of outskating a backchecker as he joins a rush. His speed isn’t as blinding as Cale Makar’s, or graceful like fellow countryman Urho Vaakanainen, but skating is certainly an asset. Strong enough to win most of his one-on-one battles, Heiskanen will finish checks or use developing upper-body strength to pin and hold long enough for support to arrive. He may not have franchise-carrying potential, but Heiskanen would be an excellent top-pairing option or No. 3 to anchor a reliable minute-eating duo.

#Liiga: LHD Miro Heiskanen (Ranked No. 16) scored his 3rd of the season off a pass from LW Roope Hintz (DAL) in HIFK’s a 4-2 loss to TPS pic.twitter.com/jHp4MMlsIr