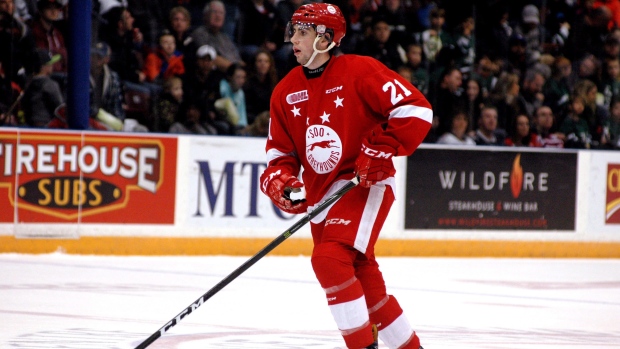 Poised two-way defenseman with very good puck skills and a little bit of flair to his game. Timmins plays with his head up and is a very good skater who can either maneuver his way out of jam or trap opponents with a long headman up the ice. He’s not a roadrunner who will blow past opponents, but he seems to have a handle on play development and orchestrating an attack beginning from his own goal line. The Soo had a bounce-back year, and Timmins was a big part of it — his 61 points tied the WHL’s Juuso Valimaki for the most points by a CHL first-year draft eligible defenseman. Timmins is a kid who improved significantly in all areas as the year progressed. He’s a classic power play point man thanks to a hard shot he keeps low and on net, but he uses his slap and pump fakes effectively, sliding pucks via no-look passes to an open weak side rather than telegraphing his intentions. He’s a solid three-zone defender who has decent closing and catch-up speed, but his stick and body positioning are both excellent.