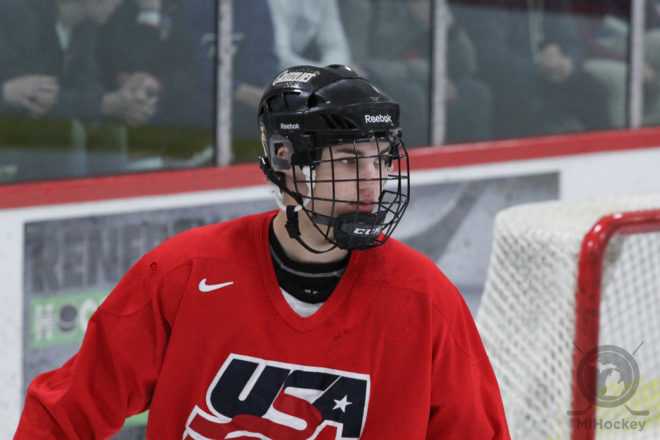 Norris has everything you want in a top-six center – size, speed, strength, and the ability to make his linemates better. He’s thick, strong on his skates, plays physical, is matched up against top players and also provides offense on special teams, including on the penalty kill. A playmaker with soft hands and a very hard, accurate shot, Norris plays a heavy game and uses his size and determination to win puck battles. He’s a solid stickhandler and controls the puck in tight spaces, and he settled things down by curling or weaving away from pressure. Playing in traffic isn’t a problem for Norris, and he’s consistently poised on his zone entries.

Norris was a strong two-way presence for Team USA and was their top-line center for most of the season. He took most of the key draws, and didn’t look overmatched against bigger, older NCAA opponents, who seemed to have difficulty containing him or sealing him off. You’ll get varying opinions on which NTDP player not only had the best season, but also who projects to have the best NHL career. Norris, a native Michigander with an NCAA commitment with the Wolverines, can certainly have a solid case made for him. He led Team USA with 27 goals — 26 at 5v5 or shorthanded — and posted a team-best 1.00 points-per-game average. Norris also tied for the team lead in both points (61) and shorthanded goals (3). Additionally, he is smart enough to use his physicality without taking unnecessary or emotional penalties. A talented, mature leader with an NHL-ready build.