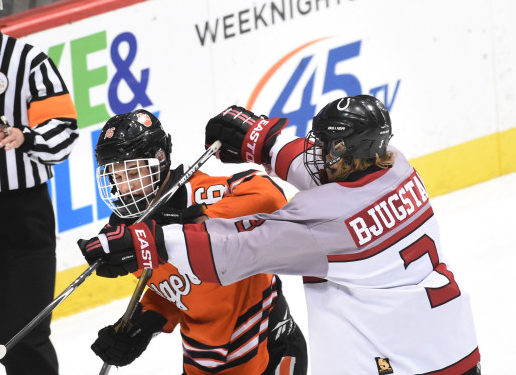 Hard-nosed defender with NHL bloodlines who is a critical piece to Stillwater’s Minnesota high school steamroller. Bjugstad is a two-way blueliner with a rocket of a shot who plays on the top pair and is used for all key matchups. His presence as a No. 1 on the back end reveals a team leader with sound instincts and a suffocating style that in my view was critical to the team’s success in what turned out to be a dominant season. His skating is slightly above average, but he identifies gaps and will fill them in as far down as the opposing goal area. This is where his excellent shot/release combination comes to bear, and he rarely hesitates to use it. His passes are accurate and he can lead players beyond traffic and into open ice.

Bjugstad is very sound defensivey from the dots down and improved the timing of his releases to cut down on wandering. He ran the point on the power play and anchored the top penalty killing unit, and can play in any situation with extended shifts without running out of gas to the point of ineffectiveness. Bjugstad is a bit of a ruffian who likes to mix it up and tries to change momentum with a big hit or rough stuff after the whistle. A warrior who will do whatever it takes to make life easier for his goalie. You can make a strong argument that Bjugstad was snubbed for being left off the ballot for the Reed Larson Award that is given annually to Minnesota’s top high school defender.