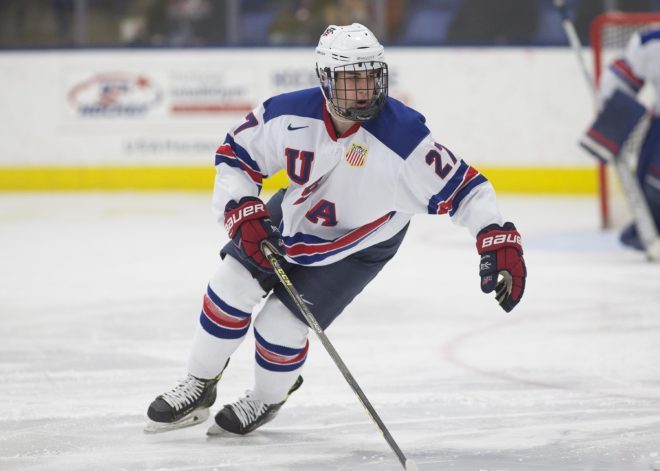 Farrance is clearly one of the top two-way defensemen available for the draft, and I’ve seen enough of him to boldly confirm his reputation as a quality power play quarterback with top-four upside. He doesn’t get enough credit for his defensive play, and being under six foot is part of the reason why. Still, he’s the NTDP’s top defenseman who logs top-pairing minutes, runs the power play and kills penalties. Farrance is capable of winning puck battles against bigger older players — he’s done it against NCAA competition –and he uses his lower body strength to keep his man near the cage clear of shooting lanes. Not only does he possess a booming, accurate shot, but his ability create plays off the rush keeps opponents honest. Farrance has an exceptional set of hands and can handle any pass with relative ease, especially from across the ice. He is a Grade A puck manager and can handle a forecheck, beating back pressure while making proper decisions. His quick-strike mentality helps engineer odd-man rushes, but he’s proven to take the puck from end to end with both speed and confidence. Farrance is a Rochester native who is headed to Boston University in the fall.

Found this little gem of LHD David Farrance (Ranked No. 40). Rochester native is headed to BU in the fall. #2017NHLDraft pic.twitter.com/Rwa37zVa1S