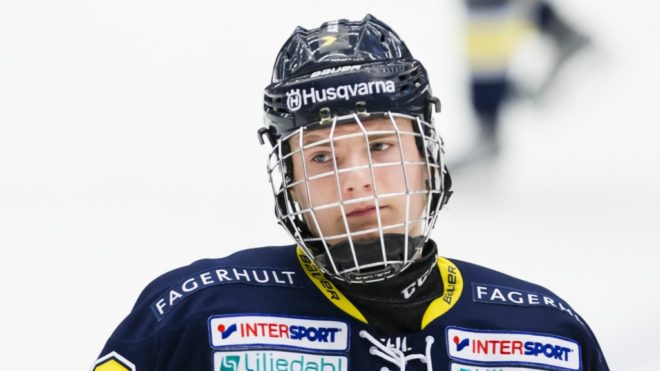 One of the few forward prospects who played consistent minutes for a contending adult team, Andersson showcased more creativity and puck skills at several best-on-best tournaments while manning one of Sweden’s top two lines. He’s a 200-foot battler with soft hands and makes smart decisions while motoring up ice. Andersson is a virtual lock for a lengthy NHL career, and his style of play can fit any system.

Andersson is a mature, two-way center who can occasionally fill in on the wing. He had a strong rookie season in the SHL, finishing with 19 points in 42 games for a talented HV71 club. Andersson has run the gauntlet of international competition with aplomb, placing among Sweden’s leaders in goals and points at the last WJC and U18 world championship. A shifty, elusive player with good acceleration who is quick on his feet and a has knack for making something out of nothing, Andersson has a ton of upside considering how well he fared as a teenager on a good team in an adult league. He has a very good shot, mainly for his release and accuracy rather than sheer power. Playing inside is something he’ll do with regularity, and Andersson’s proven to snap off a quick shot while cutting across or in full stride.

#WJC: Lias Andersson (Ranked No. 11) gets credit for a goal after some hustle and bustle. Grundstrom created havoc. pic.twitter.com/sPiBnOegTl