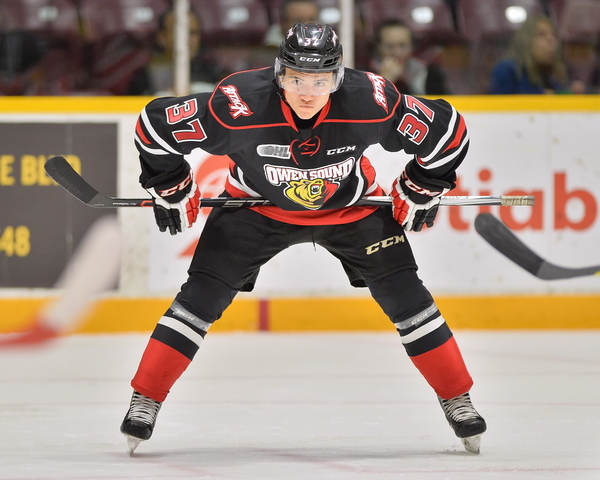 Strong two-way center who was the best player on a deep, talented Owen Sound squad. You can make a strong argument that Suzuki was the OHL’s best 2017 draft prospect both this year and last, as he led his peers in primary points in each of the last two seasons.

Suzuki is a strong skater in terms of balance and agility, and his overall speed is slightly above average. He is a big fan of slowing the game down to his own pace, but he’s proven to drop the shoulder and catch defenders flat footed. Suzuki is very dangerous in open ice because of the way he processes things before him. He is very difficult to plan for since he is as good a goal scorer as he is a playmaker. He’s a gifted passer and stickhandler who can play plays while moving laterally or cutting across the grain. He’s one of the more reliable players you’ll find for this specific draft year, as he plays in all situations and won close to 51 percent of his draws. Suzuki is a competitor who will lend support well below his own circles, and he’s strong enough up-top to win puck battles against bigger players. More of a silent, lead-by-example type who plays gentlemanly and lets his stick do the talking for him.

Raise your hand if you’re still blown away by this Nick Suzuki goal from last night. ‍#RoarWithUs pic.twitter.com/tH3prsiWdk