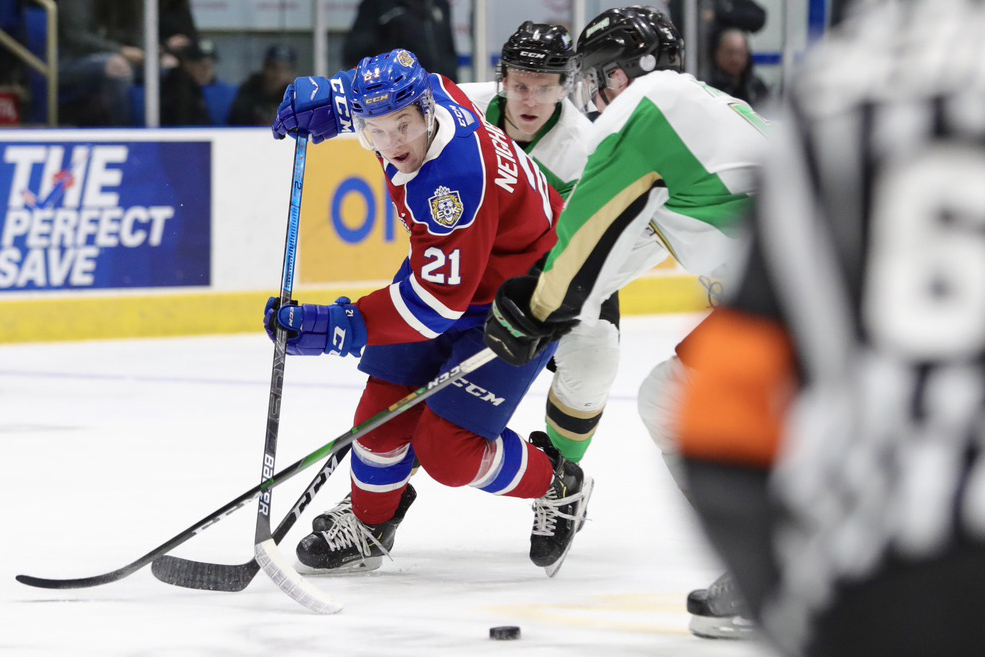 You wouldn’t think a tough, physical team like the Blues would require help in those departments, but it appears as though it was an organizational mandate to target youngsters who were known to mix it up or physically intimidate. Each of their first three picks in 2020 could be described either as tough or physical, but those same kids also have creativity and can deliver results on the puck. The selection of WHL’er Jake Neighbours (pictured) at 26 wasn’t nearly as big a shock as some have made it out to be — he was a 70-point top-line winger and has played for Canada at all the critical pre-draft tournaments. He was followed by Day 2-selection Dylan Peterson, a hard-nosed Californian with size and underrated playmaking abilities. The Blues addressed the need on defense with hard-hitter Leo Loof, who like Peterson and Neighbors played on the international stage but did so as a momentum stopper and shutdown type from the back end.

It wasn’t until they grabbed toolsy puck wizard Tanner Dickinson when the Blues opted for pure finesse, and they went right back to defense with big-bodied types in UMass-Amherst defenseman Matthew Kessel and Canadian-born USHL’er Noah Beck. The selection of Ottawa 67’s backup Will Cranley made it six times in the last seven drafts that St. Louis took a goalie.

A once rich and deep prospect pool that has since been whittled down to only a handful of notables received a shot in the arm in Round 1 of the draft when the Blues grabbed this physical and energetic winger. Neighbours was a critical piece to Edmonton’s success by doing a ton of the hard work necessary for a skilled linemate like Dylan Guenther to have his way with the puck. He hits hard and makes bang-bang plays off an incredibly aggressive forecheck, and any concerns with speed are likely connected to his stride rather than the actual ground he can cover.

There were games when Peterson looked like the best and most engaged forward on the NTDP, which is tough to do on a team full of pit bulls. His size and puck skills can prove to be too much for defensemen of any age to handle, and Peterson’s assertiveness and hard hits just make it tougher. He once was considered a possible first-round target, but some inconsistencies with his shooting and some nagging injuries kept his production to a minimum. Peterson was listed as a center and it’s probably where he should stay, especially when you factor in his passing and vision. He’ll be suiting up for Boston University this season.

The flashy Swedish defenders usually get all the attention during a given draft year, but Loof is one of Sweden’s most composed and reliable teenage blueliners when it comes to beating back a forecheck. He has a high panic threshold under extreme pressure and he also shows his poise in a variety of ways. Loof is an under-appreciated skater who picks his spots when to go end to end. Granted, those moments do not take priority over his defensive-zone duties, but it’s still a useful option to have.

Flashy players looking for a gig in the OHL should always consider Sault Ste Marie as a potential destination, because that’s exactly where some of the draft’s craftiest puck wizards have developed. Dickinson definitely is one of those types, so it shouldn’t surprise anyone that he registered a 40-point season yet finished 10th in team scoring. Again, that has a lot more to do with the Soo and their deep lineup than it does about Dickinson. Nonetheless, even with an abundance of scorers, it was the younger Dickinson who seemed to fight extra hard to earn a spot on the top power-play unit. He’s not very big and has a ton of weight to put on, but credit to him for making use of his elusiveness, stick skill, and creativity to become a viable draft option.

A steady defender with size who plays a clean, composed game, Kessel was expected to be a physical presence on the Minutemen blue line but ended up contributing on offense as well — he scored seven goals as a freshman rearguard, mostly because of his big shot. He’s a double overager who spent three nondescript seasons in the USHL before joining the college ranks, so it’s safe to say he made the most of his final year of eligibility. One thing to consider about his point production is that he spent most of last season paired with offensive defenseman Marc Del Gaizo, which means Kessel acted more like a safety net than the one charged with kickstarting the attack or running the power play. It was in this role where Kessel succeeded as a newcomer, mostly because he stays within himself and cleans up gaps in coverage when his partner was motoring all over the ice. UMass is returning all but one of last season’s blue-line regulars, so expect more of the same from Kessel, which bodes well for their chances in Hockey East.

I’d probably have to go back and check, but it started to feel like teams were targeting backup goalie prospects in 2020 more than in any in recent years. Not that there’s anything wrong with backing up, it just seemed like I covered them more than usual. Anyway, Cranley is a strong pick at 163 (I was a bit bullish when I ranked him at 118). His 67’s were the juggernaut of juggernauts who averaged almost five goals a game, but there were games when Cranley had to save their bacon (Nov. 23 against Mississauga, specifically) by making save after save. He also has the size you’re looking for (6-foot-4, 183 pounds).

An overage defenseman who like Kessel has good size and also played in the USHL, Beck definitely has the higher upside from a offensive standpoint. Beck was a big minute eater for Fargo, to include quarterbacking the power play. You would think a 6-foot-4 defenseman drafted this late wouldn’t be anything beyond a stay-at-home type, but Beck can handle the disc like a forward and skate it out of trouble with speed and confidence. I remember him from the 2019 CJHL Top Prospects Game, and he’s only an overager by a year, so expect Beck to quickly establish himself as a critical piece for Clarkson once he’s done with the USHL.