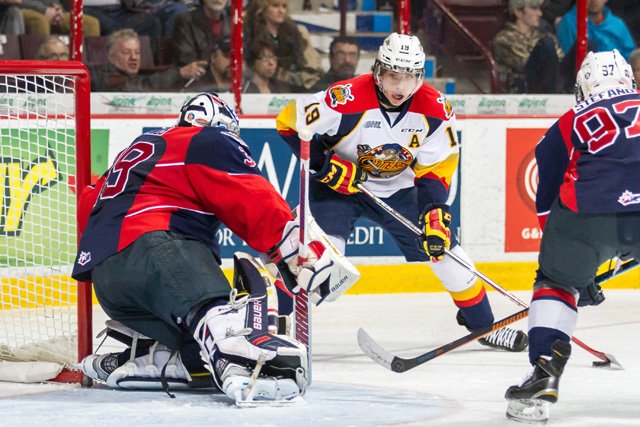 Position: Center
Shoots: Left
Height/Weight: 6’3″ 187 lbs
Born: March 7, 1997, Mississauga, Ontario
Obtained: 2013 OHL Priority Draft (1st Round, 2nd Overall)
Notes: Led OHL in scoring after he registered six points on the final day of the regular season to finish with 129…finished tops in league with 84 assists and was third in goals with 45 — 31 at even strength…Placed third among OHL rookies in 2013-14 with 29 assists, and was sixth in overall rookie scoring with 39 points…Led Team Canada – Ontario in scoring with 11 points (six goals, five assists) in five games at 2014 World U17 Hockey Challenge…Scored a hat trick in semi-final win over the United States at 2014 Ivan Hlinka Memorial Cup, then added another tally in gold medal game against the Czech Republic to help Canada capture the title…Finished tied for second in tournament goal scoring with five.

SCOUTING REPORT
If Connor McDavid is the 2015 draft equivalent of the showtime Oilers of the 1980s, then Dylan Strome’s game is a lot like their rival mid-1980’s Flyers; just plain tough to play against. Strome’s elite play with the puck and the way he protects it can make attempts at slowing him down both futile and nightmarish. He’s a hard match up who can carve up any game plan with precision puck movement. Strome is a big-bodied center who destroyed the OHL this year and did so while playing second fiddle to McDavid. He’s excellent at creating plays off the rush, but he also excels when the game is tightly checked and every lane is seemingly clogged. It is in the offensive zone where he uses his size, reach and elite vision to his advantage. He’s a precise passer and gifted playmaker who epitomizes opportunistic; make a bad decision with him on the ice, and there’s a good chance you’re going pay for it. Strome is extremely patient with the puck but knows when to hold on and wait for better options or simply let one rip. He can certainly be classified as a goal scorer; he favors an excellent wrist shot over the slapper, both fired with very good accuracy. He has a great nose for the net and possesses soft hands; time and again you saw Strome quickly corralling rebounds or loose pucks in and around the crease for either a hard-fought goal or a quick pass to an open side. The skating concern is something to keep an eye on, but at times has been completely overblown, as he has excellent balance with good mobility. Besides, we’ve seen a shift in that coaches feel it is far more important to think the game fast rather than to actually skate fast. His detractors are few, but in terms of being engaged in his own end, they are right in that he has a tendency to lean towards that red line rather than use his size to assist in separating attackers from the puck. This can be construed two ways: he’s either being opportunistic, or he’s afraid of being caught out of position. The former is innate, while the latter is correctable with experience. I would not go as far as calling Strome a project, but his blend of size and skill from the center position is so rare, that a lengthy development period will reward any franchise in spades.