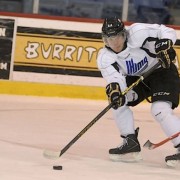 Daniel Sprong
Position: Right Wing
Shoots: Right
Height/Weight: 6’0, 180 lbs
Born: March 17, 1997, Amsterdam, Netherlands
Central Scouting Rankings (Prelim/Mid/Final): ”A“/ 20th NA/ 20th NA
Summary: We knew he was considered a boom-or-bust time but falling to the late second round was surprising considering the amount of teams with multiple picks. Sprong is a very quick and explosive skater who has very good acceleration and a long stride. For a finesse player, Sprong is pretty strong on his skates and has shown really good balance and agility when carrying the puck through and around defenders. His kit bag is full of tricks and surprises, and he can be very difficult to defend, especially on the rush. Sprong has an excellent wrist shot and can shoot it hard, low and on net from the poorest of angles yet still force the goaltender into making a tough save while losing rebound control. He is also a power play specialist who is constantly moving but not to the point where he’ll overload a side and create a disadvantage for his team. Very good offensive instincts and can read plays beyond the typical “this is where the puck is going so let me go there.” Rather, he takes advantage of voids left by defenders by understanding and anticipating how they would react to the puck being in a specific area. In other words, get him the puck because he’ll be locked, cocked and ready to rock. Unfortunately for Sprong, he has had a very difficult time adhering to the tenets of defensive hockey, and has even gone as far to give up on plays heading the other way. He seems to have a personal quota into how many times a game he’ll bust it on a backcheck or at least try to make a defensive play. Sprong may never well get it, but he’s certainly worth the risk.

Dominik Simon
Position: Center/Left Wing
Shoots: Left
Height/Weight: 5’11, 176
Born: August 8, 1994, Prague, Czech Republic
Central Scouting Rankings (Prelim/Mid/Final): NR/ NR/ NR
Summary: Almost triple-overage Czech pivot who has put together some solid showings playing as a younger contributor on the Czech National Team at the World Championships, while Canadians might remember him from his Peter Forsberg-esque shootout winner versus Canada at the 2014 WJC. He’s got a great set of hands and is a pass-first kind of player but shies away from the hard battles. He’s a lot closer to being ready for the AHL so expect him in North America within the year.

Frederik Tiffels
Position: Left Wing
Height/Weight: 6’0, 192 lbs
Shoots: Left
Born: May 20, 1995, Cologne, Germany
Central Scouting Rankings (Prelim/Mid/Final): NR/ NR/ NR
Summary: Top-line left winger for the Broncos who had a solid freshman season although he was a bit of an overager. Tiffels has a power forward’s build and can flat out fly, but he isn’t much of a physical presence and has trouble burying some Grade A chances. He carried Team Germany at the 2015 WJC, which normally isn’t saying much, but a promising draftee nonetheless. Likely tops out as a third line energy guy because his goal-scoring touch and shot accuracy are suspect.

Nikita Pavlychev
Position: Center
Shoots: Left
Height/Weight: 6’7, 200
Born: March 23, 1997, Yaroslavl, Russia
Central Scouting Rankings (Prelim/Mid/Final): “B”/ 90th NA/ 153rd NA
Summary: Towering over his USHL opponents with his 6’6 frame didn’t do much for him in the offensive end, but he’s a very reliable checking center with very good foot speed for his size. He’s a longer-term project than your average draftee in that he still doesn’t grasp the importance of puck patience and using his size to take advantage against undersized defenders. Considering how few picks the Pens had, you would have liked to see them go for something more dynamic and/or safer.