Trenton (The Draft Analyst) — Chris Izmirlian scored the go-ahead goal late in the third period, and Alex Lyon stopped 28 shots as the Yale Bulldogs opened their season with a 3-1 win over the rival Princeton Tigers at the 2015 Capital City Classic. Yale jumped out to a 1-0 lead just 1:06 into the game on a goal by junior Mike Doherty, but sophomore Eric Robinson tied it for Princeton just 22 seconds later. The score remained deadlocked well into the third period despite the Bulldogs holding a significant advantage in both shots and territorial play, including a 19-5 shot advantage in the middle frame. Junior forward John Hayden, a draft pick of the Chicago Blackhawks, sealed the victory with an empty-net goal. Tigers junior goalie Colton Phinney was outstanding in defeat, making 41 saves. 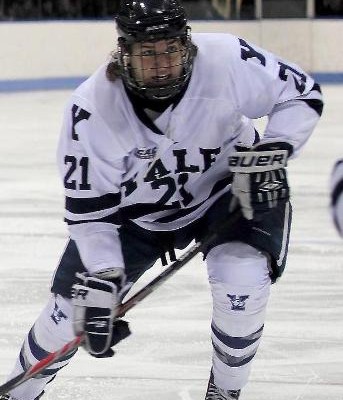 34 – G ALEX LYON (UDFA/1992): It is expected that this Minnesota native will start one heck of a bidding war among NHL front offices next offseason, and against Princeton, Lyon certainly did not disappoint. And while his end of the ice after the first period was quite vacant for long stretches, he didn’t look rusty once the Tigers began to push back. Lyon was a keg cog for Yale in 2015, leading the nation in both goals against and penalty killing, and finishing with a 1.62 goals-against average and .939 save percentage. He was rewarded with accolades and nominations, none more important than being named to Team USA’s World Championship entry last spring. And what’s not to love? Lyon doesn’t go down early; his reactive ability is impeccable; and most important, his post-save recovery is on par with goaltenders currently playing in the NHL. The soon-to-be 23 year old is still a junior and a sure bet to see his undergraduate Ivy League education through (he’s a fourth-generation Bulldog).

4 – LHD ROB O’GARA (BOS 5th/2011): Heralded as of the NCAA’s top one-on-one defensemen, the Long Island native and leader of Yale’s vaunted corps of blueliners had a strong positional and instinctive game, specifically in making timely pinches to keep Princeton stapled to its own end for nearly two-thirds of the contest. O’Gara was as good as advertised on the defensive side of things – he never vacated where he was supposed to be, and wielded a very active stick and directed traffic during scrums. He was, however, a tad sloppy with the puck when trying to move it up the ice, and in several situations failed to connect on simple, uncontested breakout passes. Once the puck was on his stick across the red line, he had no problem throwing it at the net nine times with a seemingly average shot (he finished with two shots on goal). O’Gara was used on Yale’s top pairing on the power play and on occasion crept into the left circle, but we assessed his offensive game as a combination of playing it too safe and lacking a little bit of confidence. It seems his defensive play may keep improving and won’t become perishable skills, so it’ll be up to the Bruins to fine tune his future role in a puck-possession world.

21 – RW JOHN HAYDEN (CHI 3rd/2013): The hype surrounding this power forward has somewhat dissipated since he has not necessarily developed into the go-to guy Yale envisaged when he joined the school from the NTDP and a subsequent spot on last year’s American WJC roster. Hayden, however, was still one of several Bulldogs who generated chances and used a combination of skills to grind down Princeton in the defensive zone. His size (6’3, 210 lbs), strength and wingspan make him far better suited for the “halfcourt” game rather than an up-tempo environment because he’s not much a skater (albeit improved since we saw him a year ago). That doesn’t mean Hayden cannot execute – he is a very good passer and shot selector both off the rush and in cramped spaces. He sealed the 3-1 win over Princeton with an empty netter and had 10 shot attempts.

24 – LW MIKE DOHERTY (UDFA/1993): Yale’s leading goal scorer from a year ago who provided the most complete performance by a forward from either team. He scored a goal, pumped a game-high 14 shot attempts (eight on goal) and caused a tremendous amount of havoc on Princeton’s breakout attempts. A 5’11 junior from Reading, MA, Doherty was an invite to the Boston Bruins’ development camp in 2014. He owns an excellent shot with a quick release, and most of his attempts were without much hesitation as the Tigers were clogging the middle and did not present Yale’s skilled forwards with much room to make plays. The Bulldogs definitely operate via the team concept where three of their four lines are consistently used in offensive-zone situations, so Doherty’s numbers would likely be eye-popping if he were given 19-22 minutes a game on a top line with priority on offensive zone starts. 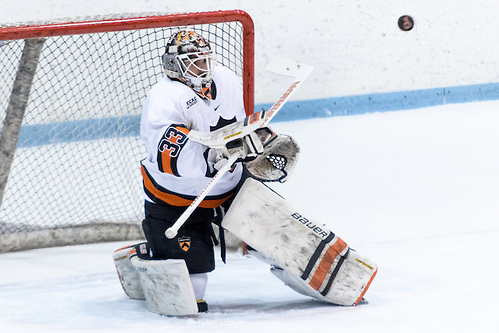 33 – G COLTON PHINNEY (UDFA/1993): New Jersey native who against Yale was a man on an island for practically the entire evening, specifically in the second period when he faced a nightmarish shot attempts disadvantage of 36 to nine. The young lad stood tall, however, and it took a late rocket from the slot to deny him a winning decision. There was simply too many positives to digest in watching Phinney tend goal; he rarely flopped, and when he did, he was on his back rather than belly-down on the ice. He would challenge the shooters slightly above the blue paint, and his glide back to the goal line seemed like a calculated way to deny the onrushing shooter with an unexposed area. Why did this work for him? Phinney is quick enough to stop pucks up top and side to side if he’s dug in deep, and on several occasions flashed a very quick pad on shots to the long side (one off a one-timer). Best of all? It has to be his rebound control on not just on the long shots, but off odd-man rushes as well. There’s something about a goalie who can steer a shot to safety for an outnumbered defender to retrieve, and Phinney was doing it all night. Color us impressed, and at 6’1/175, he’s got enough size to match the skill which should have the same effect on talent evaluators at higher levels.

4 – LHD JOSH TEVES (UDFA/1995): Teves was one of a handful of Tigers who were able to handle the constant Yale pressure, and did so with pro-style patience and decision making. He’s not very big (5’11, 170), but the Calgary native compensated for his disadvantage in strength with hard, accurate passes and slick moves to avoid the bull rush. Teves also used pumps and dekes to open up lanes, and walked the offensive blue line with his head up before dishing off to open teammates or firing a low, hard shot. He’s only a freshman, so he’ll start to fill out a little bit, but the skill-speed combination should continue to make him a top option similar to his BCHL days when he was one of the circuit’s top power play quarterbacks. An admitted late bloomer, Teves is perfect for an up-tempo system, which is something he may have to champion at Princeton given its lack of experience up front. He’s also an Ivy Leaguer, so it will be a while before his name creeps up in UDFA discussion. That doesn’t mean we can’t enjoy what he’s doing at the collegiate level.

21 – LW RYAN KUFFNER (2016 Draft Eligible / 1996): An Ontario product who made a name for himself in the CCHL with the Gloucester Rangers, Kuffner is a very good skater who was the Tigers only forward who made plays during a Yale-dominated second period. We saw a lot of potential in his limited minutes, as he undeservedly bounced around the third and fourth line. At 6’1, 185 pounds, Kuffner protects the puck down the wing regardless his rate of travel and displays above average balance. He hustled throughout the contest, and on one occasion set up a one-timer with a feathered backhand pass after he raced up the ice to win a 50/50 battle. There’s the chance Kuffner stood out because the rest of the forwards were so bad, but he looks like the kind of four-year player who could develop into a two-way, top-line option well before his senior season.

11 – RW ALEX RICHE (2016 Draft Eligible / 1996): Another Ontario-reared winger (Oakville) whose presence was felt despite limited playing time. Riche (pronounced Rich) picked up the first point of his NCAA career just 22 seconds after Yale opened the scoring 1:06 into the game. The 6’0, 190-pounder chased down a loose puck at the Bulldogs’ blueline off a faceoff and fired off a shot that was tipped home by sophomore RW Eric Robinson (UDFA/1995). Although Riche was quiet the remainder of the contest, we saw why he earned a top-six role for what was the team’s season opener. He came across as a highly-intelligent player, which may sound a bit cliché since he’s already an Ivy Leaguer. Nevertheless, the kid looks pretty trustworthy with the puck from a skilled winger standpoint, and we didn’t see him force plays or blindly hurl it into open areas. Princeton has something to look forward to with its very talented Canadian-trained freshman class. Riche came reputable from the OJHL’s Cobourg Cougars – the same program which produced current NHL’ers Justin Williams, James Neal and Brandon Pirri.