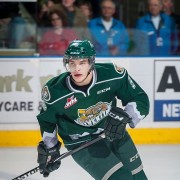 Noah Juulsen
Position: Defenseman
Shoots: Right
Height/Weight: 6’2 182 lbs
Born: April 2, 1997 Abbotsford, BC
Central Scouting Rankings (Prelim/Mid/Final): ”B“/ 38th NA / 22nd NA
Summary: Simply one of the best players on the ice night in, and night out. It’s just unfortunate that most of what he can and does provide is very difficult to quantify into a briefable stat. What we can discern from watching him is that he is a tremendous two-way defenseman who can crisply pass the puck, expertly position himself to increase the likelihood it ends up back on his stick, and physically punish the heck out of the unaware and indecisive. Juulsen may not be the thickest rearguard, nor should he be considered a swift skater. But what he most certainly provides is exceptional offensive awareness, specifically on creating time and space for a sound breakout, and finding the open man with consistent accuracy. All you really need to see is a shift or two, and Juulsen makes you an instant believer in both his reliability and importance while serving as Everett’s multi-situation top defenseman. Easily one of the draft’s premier players in terms of on-ice maturity, he’s also a leader who can be counted on to rally the troops vocally or by example.

Lukas Vejdemo
Position: Center
Shoots: Left
Height/Weight: 6’2, 194 lbs
Born: January 25, 1996, Stockholm, Sweden
Central Scouting Rankings (Prelim/Mid/Final): NR/ 39th Eur/ 46th Eur
Summary: An overage two-way pivot who was passed over in 2014, Vejdemo churned out an impressive SuperElit season centering an explosive line with fellow overager left wing Daniel Bernhardt (NYR) and undrafted right wing Jonathan Davidsson. And while he does not project to be a dominant scoring force as a professional, Vejdemo showcased excellent patience and playmaking ability while anchoring Djugardens’ top line.   Like most Swedish forwards, he understands his responsibilities away from the puck, and rarely did we see him cherry picking or dismissing a backcheck. He’s a great addition to a team who likes to grind it out and churn out chances off the cycle, and with a build suited to match up against adults, we anticipate a solid rookie season in the SHL.

Matt Bradley
Position: Center
Shoots: Right
Height/Weight: 5’11, 188 lbs
Born: January 22, 1997, Vancouver, BC
Central Scouting Rankings (Prelim/Mid/Final): NR/ 144th NA/ 126th NA
Summary: The Habs need help on the wings and went their traditional CHL route to increase the likelihood the issue gets addressed. Bradley can provide versatility as he produced for Medicine Hat in a variety of situations. We think he’s a poor man’s Ryan Callahan (if the latter was a center) in that he’s shown both playmaking and scoring ability but can play a physical, gutsy game as well. He also possesses an underrated/deceptive wrist shot and has no issues using it from all angles. The Habs must feel there’s more offense somewhere in there, and we kind of agree with them.

Simon Bourque
Position: Defenseman
Shoots: Left
Height/Weight: 6’0, 185 lbs
Born: January 12, 1997, Longueuil, QC
Central Scouting Rankings (Prelim/Mid/Final): C/ NR/ 76th NA
Summary: We felt pegging him as fifth rounder was sort of shortchanging him, but the Habs went local and took him a full round later. Either way, Bourque is an excellent positional defenseman who took on a leadership role with aplomb on a Rimouski team loaded with stars. His play and confidence grew stronger as the Oceanic marched towards the Memorial Cup, to the point where he outperformed (and at times displaced) veteran and Flyers’ first rounder Samuel Morin. Bourque’s play certainly did not go unnoticed, as he was one of three finalists for the QMJHL’s Kevin Lowe Trophy for best defensive defenseman. Great pick for the Habs.

Jeremiah Addison
Position: Left Wing
Shoots: Left
Height/Weight: 6’0, 182 lbs
Born: October 21, 1996, Brampton, ON
Central Scouting Rankings (Prelim/Mid/Final): NR/ 127th/ 129th NA
Summary: Well-rounded two-way player whose maturity has helped him deal with some consistency issues. After the explosive second half following his trade from Saginaw to the 67’s, you can say he dealt with them accordingly. Has one of the best shots in the draft, and his scoring was done playing mostly with undrafted center Dante Salituro, not 2015 first rounder Travis Konecny. Addision is a tremendous skater and relentless on the forecheck, where he uses both his speed and physicality to force turnovers and subsequent chances. Another solid value pick for the Habs.