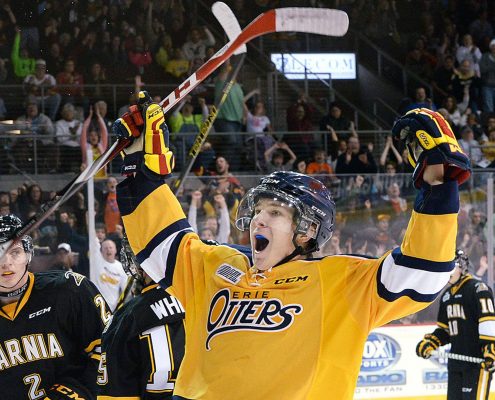 Goal-scoring power forward with an NHL-ready build who may be a bit undervalued playing alongside Erie’s notable talent the last two seasons. He was able to rack up assists playing on the Otters’ top line with Dylan Strome and Alex DeBrincat, but keep in mind that his speed and tenacity on the forecheck created scoring opportunities without the benefit of getting his name of the scoresheet. Raddysh is a good skater with good closing speed once he gets the wheels churning, and he uses a long reach to force turnovers. His first step isn’t that quick, but his body positioning and wide silhouette allow him to maintain puck control on the rush despite a general lack of breakaway speed.

One of the more cerebral power forwards in the draft in terms of reading plays and slipping behind coverage, Raddysh is more of an enabler than a difference maker, but one who will help on the power play. He’s big, tough and physical enough to groom for additional duties beyond filling the scoresheet.