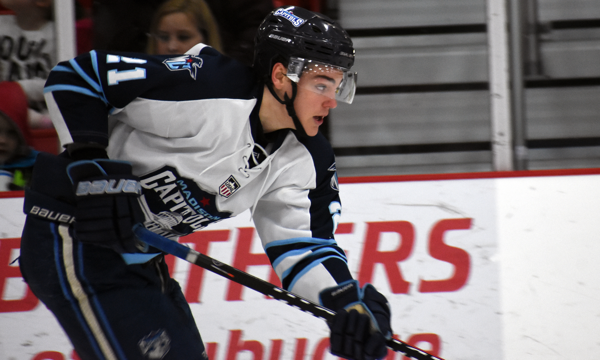 There are two kinds of summaries I can write for the Arizona Coyotes’ 2020 draft experience — one that sounds dramatic and sanctimonious; the other taking a direct route towards reality. Whether you’re a big fan of actual events, or simply echo popular opinion, chances are you and I will STILL be in agreement that the Yotes’ at the 2020 draft screwed the pooch in historic fashion. I get the whole risk-taking aspect of the draft, and most of us knew troubled defenseman Mitchell Miller was still a notable draft prospect despite having serious baggage related to what looked to be a hate crime. But the gamble failed miserably under the weight of intense public pressure and it took only a few days for the Coyotes to sever all relationships with a kid they showcased to their fanbase less than a week earlier. There will be a longer-lasting impact, however, as Arizona remains a mediocre team yet one who went the first four rounds of the draft without a single pick. They also traded prospects and high draft choices for veterans in other deals, which usually puts more pressure on later-round kids to hit.

Power winger Carson Bantle (pictured) was taken in Round 5 and is a long-term project, as is overage winger Ben McCartney, but both can cause havoc in the low slot and win battles along the boards. The selection of Swedish winger Filip Barklund was a little odd considering he was nothing more than a role player on a highly-competitive team (I think Oskar Magnusson from Malmo or Eliot Ekmark from Linkoping would have been harder swings), and project winger Elliot Ekefjard (also from Malmo J20) in the early seventh round was a middle-six type who barely played in the league the season prior. Still, most of these factoids will continue to be overshadowed by the Miller fiasco until at least one of the Yotes’ other 2020 picks develops into a sort of saving grace from what has been an otherwise stained experience.

A power winger with soft hands who showed top-line tendencies beyond going to the net or taking advantage of his physical gifts, Bantle is a Wisconsin native headed to Michigan Tech. He’s been a notable U.S.-born prospect for several years, so it should not come as a surprise that he previously played for Team USA at the Ivan Hlinka tournament. I mentioned in the draft report that the wing position within the farm system was thin, and Bantle should be considered the most promising of the four they selected.

I won’t beat up on a team with only five picks and none in Rounds 1-3, but identifying Barklund as Malmo’s best-available draft prospect at pick No. 142 was something and jumped out at almost instantaneously. I didn’t react to Arizona’s Barklund pick the way New York Jets’ fans did in 1995 when they took tight end Kyle Brady over linebacker Warren Sapp, but I was nonplussed nonetheless. What Barklund brings is an effective three-zone game from the wing, which is where he played all of last year, although it was as a depth player without the role or responsibilities of several others who also out-produced him. Nonetheless, Barklund while playing with experienced linemates proved to be competent at handling the puck and making several tough but impactful decisions in a given shift.

This pick may very well have been the one that Arizona’s Swedish scout pounded on the table for, because Ekefjard had a strong start to the 2020-21 season with Malmo. He’s got crazy size (6-foot-4, 216 pounds), but you wouldn’t have guessed him for a big if you watched him skate and stickhandle in traffic. He’s been a middle-six winger and power-play fixture thus far, but one thing that continued to stand out is Ekefjard’s decision making both on and off the puck. There’e a craftiness to his game that is rare among big-bodied wingers, and although I won’t call him a steal or even close to becoming an NHL regular, there are several impressive factors beyond the size that more than explains this selection.

Right when it looked liked the Coyotes (of all teams) were going a full draft without a CHL’er, Jankowski and crew grabbed this hard-nosed winger who served as a top-six mainstay in each of the last two seasons. Brandon relied heavily on McCartney’s toughness and slot presence, and he rewarded them with a team-best 36 assists and 105 penalty minutes — the latter the second most in the league. He’s done everything asked of him and shouldn’t fail at contributing at higher levels in one way or another.