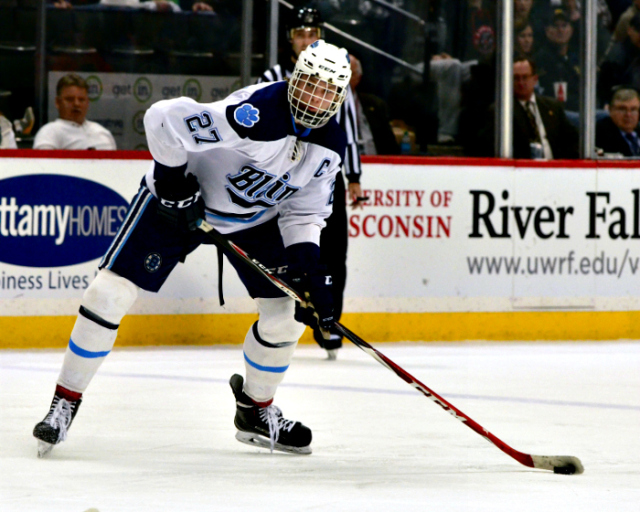 Tufte is tremendous prospect worthy of significant praise for a variety of reasons, namely for obliterating Minnesota’s high school circuit to a tune of over three points per game. He’s a freakish combination of size and skill. Tufte was the top pick in the 2014 USHL Futures Draft, then won the state of Minnesota’s famed “Mr. Hockey” award after starring for Blaine High School this season. He didn’t have the best season for Fargo, but you can see how big of a home run he’d be if all things pan out. Tufte is an excellent skater for a big man and his goal-scoring acumen is reminiscent of a young John Leclair from his Vermont days. His decision to quit the USHL and head back to high school still doesn’t sit well with us, but who are we to stop the young man from making life choices.

Tufte has excellent hands and securely controls the puck while on the move, and he uses his massive reach to keep ownership even as he moves laterally. His shot is heavy enough to keep goalies honest, even if he’s wiring one from a bad angle or from just inside the blue line. Tufte killed penalties for Blaine but was relegated to limited role once he returned to Fargo. There are times when he plays out of control and takes undisciplined penalties, but he’s a power forward so they are more palatable than if he was a finesse player.