by Gregory Christy
Special to The Draft Analyst
Tweet 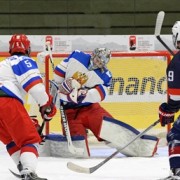 Ilya Samsonov
Position: Goaltender
Catches: Left
Height/Weight: 6’3, 203 lbs
Born: February 22, 1997, Magnitogorsk, Russia
Central Scouting Rankings (Prelim/Mid/Final): NR/ 1st Eur/ 1st Eur
Summary: With a 6’4 frame, Samsonov is able to cover a vast majority of the net at all times. He never gives up on a play and has the raw talent to make desperation saves when needed. Samsonov is generally sound positionally, but does get caught out of position when forced to make a quick side-to-side save. With a three year contract in the KHL, and goalies like Braden Holtby and Philipp Grubauer in the Capitals’ system, Samsonov won’t be rushed over to the NHL anytime soon, and may end up being just a valuable trade asset. 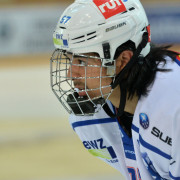 Jonas Siegenthaler
Position: Defenseman
Catches: Left
Height/Weight: 6’2, 220 lbs
Born: May 6, 1997, Zurich, Switzerland
Central Scouting Rankings (Prelim/Mid/Final): “B”/ 12th Eur/ 12th Eur
Summary: Siegenthaler, a classic two-way defender with an NHL build, has very good top-end speed to beat players back to retrieve the puck. When he does retrieve the puck, he makes an accurate first pass out of the zone to push the offense forward. He is a slick skater with the puck, which makes him a valuable asset to any power play. His low wrist shot from the point is hard and accurate. He has good hands to corral passes, but when the puck comes around his side of the boards he does struggles to keep it in. Additional development could make Siegenthaler become what the Capitals need to fill the hole following smooth-skating Mike Green’s departure.

Connor Hobbs
Position: Defenseman
Catches: Left
Height/Weight: 6’0, 187 lbs
Born: January 4, 1997, Regina, SK
Central Scouting Rankings (Prelim/Mid/Final): “C”/ 100th NA/ 72nd NA
Summary: Hobbs is an undersized yet gritty defenseman who’s not afraid to throw his weight around the ice, or drop the gloves if needed. He is more of a two-way defenseman that brings offense, but is also capable of winning his one-on-one battles in the defensive zone. When in the offensive zone, Hobbs has the vision to find the open man and feed it right on the tape for a scoring chance. Hobbs could turn out to be a good depth defenseman for the organization, which is in need of more two-way blueliners.

Colby Williams
Position: Defenseman
Height/Weight: 5’11, 191 lbs
Shoots: Right
Born: January 26, 1995, Regina, SK
Central Scouting Rankings (Prelim/Mid/Final): NR/ 203rd NA/ NR
Summary: Williams is similar to fellow Caps’ draftee (and Regina defense partner) Connor Hobbs in that he is a small but gritty, hard-nosed defenseman.  He is a frequent fighter who is not afraid to be physical with anyone on the ice, and he takes a decent amount of penalties per year, which makes him a bit of a liability. Nevertheless, he has good vision in his zone to make good, accurate passes while finding the open man. In the offensive zone he is a dual threat because he can score goals from the point with is very good shot, or use creativity and accurate passing for a scoring chance. With the NHL turning more to speed and skill rather than grit, Williams could turn out to be a rare breed who is able to bring both to the table for the Capitals, which is important since Washington as an organization will be lacking in defensive grit when Brooks Orpik’s contract expires.