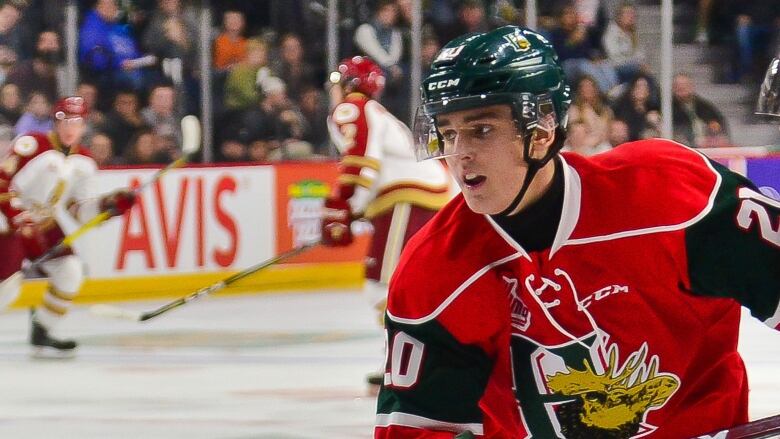 One of the few drawbacks of being a Stanley Cup contender is succumbing to the lure of trading draft picks or prospects to facilitate trade-deadline deals, which is exactly why Colorado had its lowest draft-pick total in eight years. Although the Avs were able to retain their first-round pick, their five selections in total did not include the second rounder that was dealt for Andre Burakovsky — a trade any general manager would make. Considering how loaded the prospect pool already was, the drafting of injured defenseman Justin Barron could be viewed as a low-risk maneuver even though it required the 25th pick to make that move. My initial reaction was mixed, mostly because there were similar defensemen available who unlike Barron were not plagued by blood clots in their draft year. But when things are percolating, Barron can be a real difference maker on or off the puck, and he’s serve as the perfect compliment to aggressive puck movers like Cale Makar and Sam Girard, and potentially Bowen Byram. After taking Barron late in Round 1, GM Joe Sakic and chief scout Allan Hepple grabbed skilled forwards the rest of the way; each known to be among the best skaters in their respective leagues. Objectively speaking, I like the fact that their contingency for taking a defenseman with injury issues was loading up on high-flying forwards. You have to think there will be an NHL payoff in at least one of those groups.

This is the type of pick that puzzles the hell out of you for a few hours but then settles nicely into the shrewd category. You see, Barron’s stock was unquestionably high for several years until he suffered from a blood clot in the middle of last season. Thus, the likelihood that he would end up in the first round became more and more unrealistic. But when you own one of the league’s top farm systems while challenging for the Cup, a GM like Sakic can lob the deep trifecta from time to time, especially if it’s late in the first round. Barron usually plays at his best most nights and can be a smothering force against opposing transitions. If there’s a concern, it’s limited to both Barron and Conor Timmins being two premier right-shot defense prospects in the organization with injury histories.

Just what the NHL wants — another Foudy who can fly. Kidding aside, Jean-Luc is a little different from brother Liam, who went 18th overall to Columbus in 2018. Both can motor with incredible quickness, but Jean-Luc comes across as a bit more deliberate and calculated in an east-west kind of way. He didn’t put up the kind of eye-popping stats you’d expect from a 10th overall pick in the OHL draft, as only 28 points came at even strength, not to mention that Foudy won only 41 percent of his draws. Still, his hockey IQ cannot be questioned and there is a noticeable level of maturity and polish to his game beyond the speed and grace.

Another speed-demon, only this one plays with a bit more moxie and verve. Normally I’d classify Ambrosio as a pain to play against simply because his speed is blinding and his scoring punch is powerful. But in reality, Ambrosio is a nuisance both on and off the puck; specifically when engaged in board battles or backing up his chirps with a solid body check. Committed to Boston College, Ambrosio definitely won’t make nay friends by playing his abrasive style in Hockey East outside of those wearing the same red and gold.

Rolston is another fantastic skater who came into the season as a first-round candidate, mostly since he was one of the few late birthday’s on last year’s record-setting NTDP and was expected to be a top scorer in the USHL. Stats-wise, Rolston lived up to the expectations by scoring at over a point-per-game pace in the first half before finally slowing down considerably. But it was in the second half when he started to look more like a middle-round option than the top prospect most of us thought he was. The biggest reasons? Rolston’s creativity and shot selection were closer to average, but he definitely tries to make up for it with his speed, tenacity, and physical forecheck. No reason why he can’t top out as a Carl Hagelin type, but it likely takes him four full years at Notre Dame before he’sgiven a chance in the AHL.

Aman may be a double-overager, but he did so well as a No. 1 center in Sweden’s J20 Superelit that his age just became more of a formality and less of an indicator. He displays a classic, clean stride that is both long and powerful, but what makes Aman somewhat unique within Colorado’s draft class is his vision and precision of his passes. Aman definitely is a pass-first type but that is more by choice rather than the result of an inability to finish. He was ranked fourth overall among my top-50 overagers so I can go on about his upside and promise for quite a while.