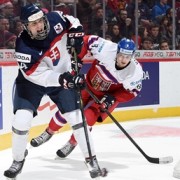 Erik Cernak
Position: Defenseman
Shoots: Right
Height/Weight: 6’4, 207 lbs
Born: May 28, 1997, Kosice, Slovakia
Central Scouting Rankings (Prelim/Mid/Final): ”B“/ 24th Eur/ 16th Eur
Summary: Physical defenseman who offers glimpses that he can contribute offensively. Plays a risky game, but the Kings’ farm system is now devoid of depth with high-end skilled blueliners. He showed promise in bits and pieces playing full time in Slovakia’s senior circuit, and was rewarded with top-pairing minutes at the 2015 WJC.  Only 18, Cernak recently signed an entry-level deal with the Kings after getting picked by the OHL’s Erie Otters in the 2015 CHL Import Draft. The writing is on the wall — this kid will be in either the AHL or the OHL for the 2015-16 season. 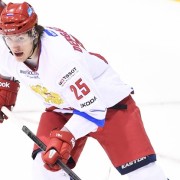 Alexander Dergachyov
Position: Center
Shoots: Left
Height/Weight: 6’4, 200
Born: September 27, 1996, Langepas, Russia
Central Scouting Rankings (Prelim/Mid/Final): “C”/ 14th Eur/ 17th Eur
Summary: The Kings are beginning to assemble quite the collection of big and intimidating Europeans, and Dergachyov will certainly fit right in.  He’s one of those typical, two-way power centers in that he doesn’t skate well enough to be considered a strong skater, but quick enough on the rush to make smart plays and distribute the puck with accuracy. His strength, however, is what separates him from most centers in his draft class, as he was one of the best, if the the best 2015-eligible pivot at shielding the puck and wearing down defenders. We assessed him as a first-round talent who would slip because of the junior league he played in, but in the end, the sort of passive xenophobia with Russian players make come back to bite the teams who overlooked him, especially when you consider every team could use a big-bodied skill center who hustles and punishes you. From a possession standpoint, the puck-hounding Kings unquestionably got richer with this pick.

Austin Wagner
Position: Left Wing
Height/Weight: 6’1, 178 lbs
Shoots: Left
Born: June 23, 1997, Calgary, AB
Central Scouting Rankings (Prelim/Mid/Final): NR/ 43rd NA/ 35th NA
Summary: Penalty-killer extraordinaire who’s big, fast, aggressive and a competitor. Most of his points come from hard work, and he’s got a cannon for a shot. You just wish he had a set of hands on him and could think the game at a high level, or he’d have top-line potential. Still, we like Wagner a lot because the few things he does to disappoint you are so minor and fixable while the potential for becoming a game-breaker is too tantalizing  to ignore.

Matt Schmalz
Position: Right Wing
Height/Weight: 6’6, 210 lbs
Shoots: Right
Born: March 21, 1996, Dunnville, ON
Central Scouting Rankings (Prelim/Mid/Final): NR/ NR/ 167th NA
Summary: We’re seeing a trend here with the Kings and their draft picks, no? Ridiculously strong power forward who was one of Sudbury’s few bright spots. Sure, he was an overager and the worst among forwards at an astonishing -57, but he also led the team in goals with 24. At 6’6/209 and growing, he’s the right guy to gamble on in the fifth round.

Chaz Reddekopp
Position: Defenseman
Shoots: Left
Height/Weight: 6’3, 219 lbs
Born: January 1, 1997, Abbotsford, BC
Central Scouting Rankings (Prelim/Mid/Final): C/ 199th NA/ 82nd NA
Summary: Big and physical defender for Victoria who would probably be a top-60 pick a few drafts ago. You have to think his high final CSB ranking (82nd NA) after being completely overlooked for most of the season was due to most front offices and scouts rediscovering what a defenseman’s core requirements should be. There will always be room for static shutdown defenders, and we expect him to develop into a good one.

Matt Roy
Position: Defenseman
Shoots: Right
Height/Weight: 6’1, 200 lbs
Born: March 1, 1995, Canton, MI
Central Scouting Rankings (Prelim/Mid/Final): NR / NR / NR
Summary: Highly-cerebral and mature stay-at-home defenseman who made a significant contribution to one of the NCAA’s top defense corps as the Huskies made their first NCAA tourney appearance in 34 years. Roy has shown flashes of being able to do more than just smart and safe plays, but it’s a testament to his coachability that he stayed within Mel Pearson’s system. He’s can play a physical style, and for most of the season played disciplined and showed awareness in the corners, but stick positioning and knowing when and not to release from the slot are areas he needs to work on in the coming season