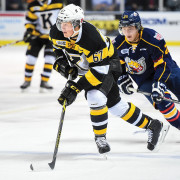 Lawson Crouse
Position: Left Wing
Catches: Left
Height/Weight: 6’4, 215 lbs
Born: June 23, 1997, Mt. Brydges, ON
Central Scouting Rankings (Prelim/Mid/Final): “A” / 4th NA / 5th NA
Summary: Simply put, Crouse is a low-maintenance, one-man demolition crew. He possesses an exception blend of power and determination, and everything good that happens to him on the ice is a consenquence of it. At 6’6, 220 pounds, Crouse has the potential to become a dominating power forward at the NHL level because he has the shot and net presence opposing coaches can only talk about neutralizing. He was given an opportunity to lead an understrength Kingston team and conducted himself with aplomb, playing in all types of on-ice situations and leading by example. Crouse does not have many flaws. He’s not a speed demon, but he’s a good skater with great balance who uses his long strides to cover ground in a hurry. He has a reputation as a fearless hitter and tireless worker; he’s at his best when he’s causing havoc along the boards and creating turnovers with his relentless forechecking, then positioning himself for a quality chance. He has very good stamina for a guy his size; he doesn’t tire out in the middle of a cycle in either zone.

Samuel Montembeault
Position: Goaltender
Catches: Left
Height/Weight: 6’3, 173 lbs
Born: October 30, 1996, Quebec, QC
Central Scouting Rankings (Prelim/Mid/Final): “C” / 3rd NA / 3rd NA
Summary: Blainville-Broisbriand’s pro-sized workhorse who had a breakout season, finishing with three shutouts, a franchise-record 33 wins and the Q’s second lowest goals-against average (2.59). Very poised in net and sound positionally. Keep in mind he played for a strong team and wasn’t pelted with a ton of rubber, so the gaudy GAA is a bit misleading as his .891 save percentage was good for only 12th in an 18-team league. His size (6’3) does not limit him quickness, and he plays like he’d rather be the hunter than the hunted. Montembeault’s style is similar to Sault Ste Marie netminder (and New York Rangers’ 2014 draftee) Brandon Halverson in that he is adept at handling the puck and has a penchant for pulling off remarkable, acrobatic saves. He does like to play deep in the crease, but he’s exceptionally quick both on his feet and side to side. Montembeault gets beat up high a lot, so coming out to challenge shooters is something he and the Panthers should consider working on together.

Thomas Schemitsch
Position: Defenseman
Height/Weight: 6’3, 205 lbs
Shoots: Right
Born: October 26, 1996, Thornhill, ON
Central Scouting Rankings (Prelim/Mid/Final): “C”/ 98th NA/ 91st NA
Summary: Strapping puck mover whose solid season with Owen Sound took a back seat to Chris Bigras’ monster year. Adept at getting the puck out of harm’s way, Schemitsch is not the flashy type when on the attack but he has excellent offensive instincts and will sneak into the weak side when he senses an opportunity to cash in. Schemitsch can play both the left and right side, but on the power play he can also fill in as a rover. The Panthers should groom him as a top-pairing type as we feel that kind of ceiling is there for the taking. He just needs to be developed properly.

Denis Malgin
Position: Center
Height/Weight: 5’9, 171 lbs
Shoots: Left
Born: January 18, 1997, Olten, Switzerland
Central Scouting Rankings (Prelim/Mid/Final): “B”/ 23rd Eur/ 20th Eur
Summary: Add Malgin’s name to the list of the three-dozen or so undersized playmakers who can’t get past the knock on their size. Regardless, he’s got a boatload of skill and is dangerous from the perimeter, which works for the Panthers since they have plenty of crease-crashing types to augment him. The son of former Soviet scorer Albert Malgin, Denis is an electrifying offensive dynamo who put on quite a show at his two premier pre-draft tournaments — the WJC’s (7 pts in six GP) and the U18’s (5 pts in 7 GP). He is very deceptive with the puck and has a hard, accurate wrist shot. For now, however, he is simply a one-dimansional skill forward whose limitations in his own end will likely cause him to flame out if he is not playing in a top-6 role.

Karch Bachman
Position: Left Wing
Shoots: Left
Height/Weight: 5’10, 175 lbs
Born: March 10, 1997, Fort Wayne, IN
Central Scouting Rankings (Prelim/Mid/Final): “B”/ “78th”/ “87th”
Summary: A very good showing at the 2014 Hlinka and knocking it out of the park at the combine gave this Miami (Ohio)-bound winger a legit chance to get drafted. Playing for Culver Military Academy creates questions about how he’ll fare against real competition, but it obviously didn’t hurt Culver alum Ryan Suter. Bachman is a high-energy player with tremendous speed who has shown a nice finishing touch. He was selected to play for Team Grier at the 2014 CCM/USA Hockey All-American Prospects Game, where he tied for a game-high six shots, and displayed awareness by corralling a loose puck from an initial shot behind the net and stuffing it home on his backhand. We peg him as the kind of player who should be given a chance in offensive situations rather than groom him as a relentless checking type.

Chris Wilkie
Position: Right Wing
Shoots: Right
Height/Weight: 6’0, 199 lbs
Born: July 10, 1996, Omaha, NE
Central Scouting Rankings (Prelim/Mid/Final): NR/ 122nd NA/ 113th NA
Summary: North Dakota-bound sniper tied for the USHL lead in goals with 35 and led the circuit with an astonishing 300 shots in just 59 games. His father, Dave, was a first round pick of the Habs in 1992 and played briefly for the Lightning. Wilkie is a very good skater and is difficult to knock off his skates when he’s blazing down the wing. He’s improved his puck protection skills, but his skill set will certainly be tested next season when he’s playing against older and stronger opposition in the NCAA.

Patrick Shea
Position: Center
Shoots: Right
Height/Weight: 5’10, 181 lbs
Born: March 25, 1997, Marshfield, MA
Central Scouting Rankings (Prelim/Mid/Final): NR/ NR/ NR
Summary: Explosive playmaking two-way center who stuck around for an extra year of high school hockey by transferring to Kimball-Union from Marshfield High. Shea is headed to the University of Maine, whose former coach Tim Whitehead coached Shea at Kimball this past season. Shea is very quick and decisive with the puck, and he can make plays while moving at a high rate of speed. He is the type of player who can slot into every situation, which seems to be what the Pathers are looking for in most of their forward draft picks.

Ryan Bednard
Position: Goaltender
Catches: Left
Height/Weight: 6’4, 179 lbs
Born: March 31, 1997, Macomb, MI
Central Scouting Rankings (Prelim/Mid/Final): “C”/ 15th NA/ 22nd NA
Summary: An aggressive big-bodied netminder who is athletic and quick on his feet, Bednard opened some eyes with some spectacular saves at the All-American Prospects Game while representing the NAHL’s Johnstown Tomahawks. He posted decent numbers in the offensively-callenged circuit, so it’s safe to say his build and athleticism are what made him stand out to Dale Tallon and staff. From a technical standpoint, he likes to challenge shooters outside the blue paint, but is quick enough to get deeper in the net if he reads the play right. Tracking the puck and not biting for so many fakes are aspects he’ll have to work on, as he’ll face smarter and more skilled opposition when he suits up for the USHL’s Youngstown Phantoms this season and Bowling Green in 2016-17.