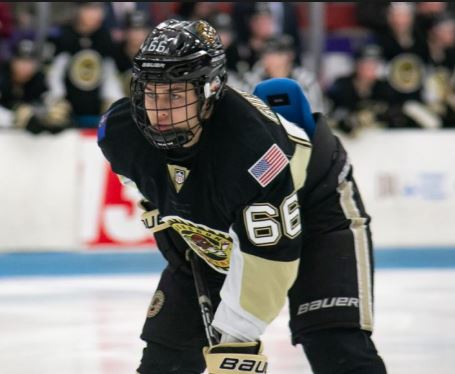 A hound in all three zones who is one of the more excitable players you’ll find in his draft class, Gushchin has spent the last two seasons in the USHL and it clearly shows in the way he competes hard and plays physical. Intelligent on or off the puck, Gushchin contributes on special teams and in late/close situations. He routinely is summoned for big penalty kills and will treat the on-ice disadvantage as an opportunity to make life a living hell for the other side. He is a very fast skater with multi-directional quickness, but Gushchin stays disciplined by keeping his stick and body positioned properly without cheating himself.

Guschin is a high-volume shooter who cannot be taken lightly no matter how calm or deliberate he appears as he enters the opposing zone. His 182 shots were third in the USHL and almost double from last year’s total and in less games. Even more impressive about Gushchin’s USHL stats — 42 of his 47 points (87 percent) were at even strength or shorthanded, the best percentage of any USHL Top-30 scorer. He was named to the USHL Third All-Star Team.

On the puck, Gushchin shows impressive skills and decision-making both within the attacking zone and on the rush. His passes are delivered with confidence, accuracy, and authority, and it is a common occurrence to see defenders backing in way too deep and affording him too much time and space to exploit. A reason for this is Gushchin’s speed and trickery, and he’s been in the USHL long enough for opposing coaches to acknowledge his elusiveness when faced with a defender stepping up. Like several other Russian first-year eligibles listed under six feet tall, Gushchin plays bigger than his measurements and is very difficult to knock off the puck.

The most impressive weapon in Gushchin’s arsenal is his shot. He can score from varying distances and doesn’t need optimal shooting conditions to make goalies earn each save. Gushchin is an excellent skater, but he can also label wrist shots off the rush with accuracy. It seems like Gushchin doesn’t try score with every shot he takes, but that speaks more to his hockey sense than his confidence in his shot — he will unload a heavy wrister or slapper from bad angles knowing the goalie will kick that rebound right into the open slot for a linemate to pounce on.