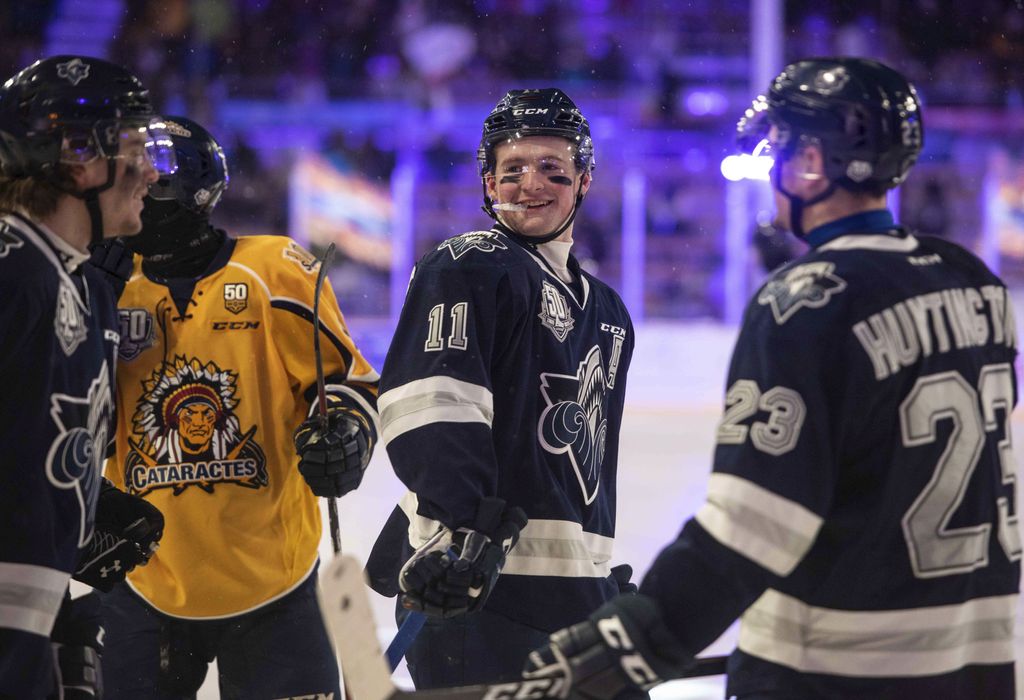 Say what you want about a history of ineptitude that’s associated the franchise, but the New York Rangers as contenders make the league an easier sell six ways to Sunday. That’s one of the reasons why the selection of Alexis Lafreniere (pictured) was seen as a watershed moment in Blueshirts lore — a potential superstar they finally can call their own. The picks the Rangers drafted thereafter were no slouches either, and the desire to become a tougher opponent began with Lafreniere at first overall and carried on well into the draft’s second day.

A third-round pick is all it cost the Rangers to move up to 19th overall and draft hard-hitting defender Braden Schneider, but it also took them out of the running to select the premier center prospect the organization lacks. Being able to acquire a late second rounder from Los Angeles for malcontent Lias Andersson was an excellent move by GM Jeff Gorton, but he caught a lot of people off guard by using that asset to take another physical prospect in rugged sniper Will Cuylle. On paper, both Schneider and Cuylle inject heavy doses of throw-back toughness , but keep in mind that Cuylle’s ability to finish with flair was a critical component in his selection for Team Canada at prestigious events like the World under-17 Hockey Challenge and the U18 Ivan Hlinka competition.

It wasn’t until late in the third round when the Rangers finally addressed the center position by grabbing Sweden’s Oliver Tarnstrom at 92, followed by playmaker Evan Vierling at 127, and manchild Matthew Rempe a few rounds later at 165. But it was undersized buzzsaw Brett Berard at 134 that really spruced up the Day 2 haul, as he plays an in-your-face game with a lot of energy while adding superior puck skills that are on par with several who went in the first round. The two goalies they drafted couldn’t be more different — 6-foot-1 WHL’er Dyland Garand is quick and acrobatic; Sweden’s Hugo Ollas is more compact and reserved within a 6-foot-7 frame. The total haul is more than substantial for a team that already has a loaded prospect pool and continues to rebuild towards prominence in the Metropolitan Division.

Really not much else to say — a ping-pong ball went this way and that way to send one of the best draft prospects in the last 15 years to the bright lights of Broadway. Lafreniere may not solve New York’s issues on defense or score 100 points as a rookie, but his ridiculous playmaking abilities and hard-nosed physicality certainly will be worth the price of Madison Square Garden admission no matter what the standings say.

Easily one of the top two-way defensemen available, Schneider’s combination of size, speed, and power must have played a role in Jeff Gorton’s desire to once again trade up to grab a defenseman he thought wouldn’t be there. Time will tell if these types of moves will ever pay off for him, but for now he added another premier defense prospect to the league’s best collection of young blueliners.

The puzzling thing about this pick is that the Rangers at the time: a) had a major need for center; b) obviously watched Cuylle and his higher-rated center Jean-Luc Foudy; and c) deduced Cuylle was the safer bet. Now, I’m sure they would explain (if they could) that the thought process behind the pick centered on Cuylle’s finishing while also voicing their misgivings about Foudy. But in the end, we just have to chalk up the Cuylle selection to nothing more than the Rangers addressing an organization mandate to get tougher. Again, Foudy is my pick here, but that’s not a knock on Cuylle, who had chemistry with his center and showcased some nice 1-on-1 moves in both tight areas and off the rush. He is one confident kid and is one of the better stickhandlers you’ll find among power wingers. And yes — he’s quite tough to play against.

It took them awhile, but the Blueshirts addressed the center ice position when they selected Tarnstrom — a Swedish playmaker whose dad Dick was a defenseman for the Islanders. Take that for whatever it’s worth, but the bottom line is that Oliver can dish the puck and does so with a noticeable adherence to accuracy. He can serve as either a finisher or a set-up man, but Tarnstrom also knows how to use his 6-foot-1 frame to protect the puck despite weighing under 170 pounds. He’s not as flashy as 2019 draftee Karl Henriksson, but Tarnstrom comes across as a clean and reliable puck manager who uses bursts of controlled speed to gain optimal separation into the neutral zone and beyond.

This was a bit of a surprising pick until it dawned on me that it was the Rangers making the selection, which then forced me to look at Garand’s skill set from the objective standpoint I previously enjoyed when I viewed and analyzed him throughout his draft year. Although the Rangers like size when it comes to goalies, Garand remains a high-profile prospect who was one of the WHL’s better netminders, and performed as such as a first-year eligible. Drafting a goalie out of Canadian major junior is something the Blueshirts hadn’t done since taking Brandon Halverson in 2014, but Garand has at least two full seasons remaining as a No. 1 before he gets the big AHL test. Expect him to be on the short list of goalies to be considered for Team Canada at either of the next two world junior championships.

The second center drafted last month by Rangers was once a highly-touted Ontario prospect who went No. 2 in his OHL draft season. He started out with Flint in a support role behind Stars’ prospect Ty Dellandrea before a midseason trade to Barrie added consistency (and a top-line role) to his resume. Vierling has size and agility, but his playmaking and vision can create highlight-reel plays. Personally, I’m not a huge fan of using second-half surges to justify the selection of a kid who was quite underwhelming until he was paired with an elite scorer like Tyson Foerster. But Vierling’s flashy abilities should be expected to blossom as long as he continues to show a willingness to work hard at those critical responsibilities away from the puck.

One of the tougher offensive forwards available who was listed under six feet tall, Berard mixes in top-line caliber offense with a little bit of a mean streak. He’s fast, soft-mitted, and dangerous with the puck, but he also is an inside player who takes the it strong to the net and isn’t shy about mixing it up after the whistle. Berard didn’t look timid or confused when his NTDP played some of the top college programs in the U.S., so there’s no reason to think he won’t become a top contributor for Providence College within a short period of time.

Shame on me for not noticing the 6-foot-7 center, who according to several people I trust is close to putting it all together and taking a giant leap forward. Forget the skating mechanics or the lowish point totals — Rempe has hands and can really move that needle on the creativity meter. He’s very easy to root for, not only for the mere sight of this giant manchild sidestepping his way around defenders, but also because he works hard on the ice and puts thought into the most subtle of decisions. Seattle will be losing a bunch of notables to graduation so expect Rempe and the likes of Panthers’ prospect Henrik Rybynski to battle for the No. 1 center job.

I got to see a lot of Ollas because Linkoping J20 was loaded with skater prospects that helped them slice through the regular season with an incredibly stingy defense. He split most of the season with the smaller 2001-born Matteus Ward, but Ollas couldn’t overtake him when both struggled at the start of Top-10 competition. He rarely faced more that 25 shots a game and I don’t recall him ever stealing one outside of one or two shootout performances. This season, Ollas is the No. 1 to start but he’s barely seeing any rubber, and when he does he’s been hot and cold. In one game before the draft, Ollas’ team dominated a high-powered Frolunda offense but he was not able to keep up his end of the bargain in what turned out to be a disappointing loss. Of course, there’s no rule that says you have to faced a high number of shots in junior to blossom into an NHL goalie, and Ollas at 6-foot-7 makes this seventh-round gamble understandable, especially since the Rangers have a good track record with goalie development.