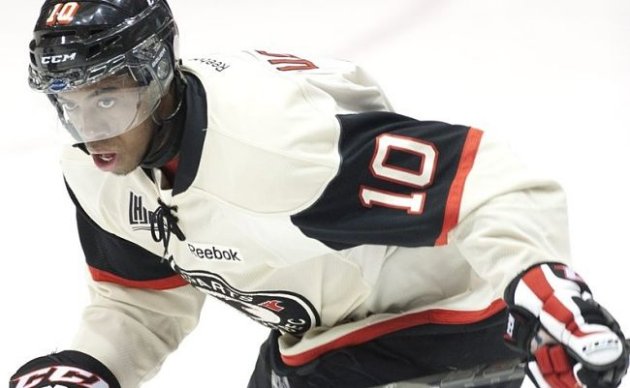 NEW YORK (The Draft Analyst) — Anthony Duclair scored two goals and added an assist to lead the Quebec Remparts to a 7-4 win over the host Rimouski Oceanic in Game 1 of the President Cup Finals. Duclair, a third round pick of the New York Rangers in 2013 whose rights were traded to the Arizona Coyotes for Keith Yandle, slammed home a wraparound feed from center Kurt Etchegary midway through the first period to tie the score at two. Left wing Adam Erne gave the Remparts the lead for good after he converted his 15th goal in 16 games off an Etchegary feed early in the second. Defenseman Matt Murphy increased the lead to 4-2 with a one-timer on the power play thanks to a nifty cross-ice feed from Vladimir Tkachev, who along with fellow draft eligible teammate Dmytro Timoshov had two assists apiece. The tally chased Rimouski starter Louis-Philip Guindon, who gave up four goals on 19 shots.

The two clubs traded goals in the third period, with Michael Joly getting the Oceanic within 5-4 with his second career playoff hat trick. Joly followed up his own rebound by beating Remparts defenseman Ryan Graves to the lose puck and firing a shot past Zach Fucale. Less than four minutes later, Duclair and Etchegary combined to put the game out of reach. Duclair swiped the puck away from Philadelphia Flyers first round pick Samuel Morin, then elevated a pass towards the slot to a streaking Etchegary for his sixth of the playoffs. Duclair closed out the scoring with an empty net goal, which gave him 17 points (six goals, 11 assists) over his last nine games. Fucale made 25 saves to earn the victory. Philippe Desrosiers took the loss after he gave up two goals on 18 shots in relief of Guindon

Massimo Carozza and Raphael Maheux rounded out the scoring for the Remparts. Anthony Deluca added his 11th for the Oceanic. Game 2 is Thursday in Rimouski. Both teams will participate in the Memorial Cup regardless of their series outcome since Quebec is this year’s host city.