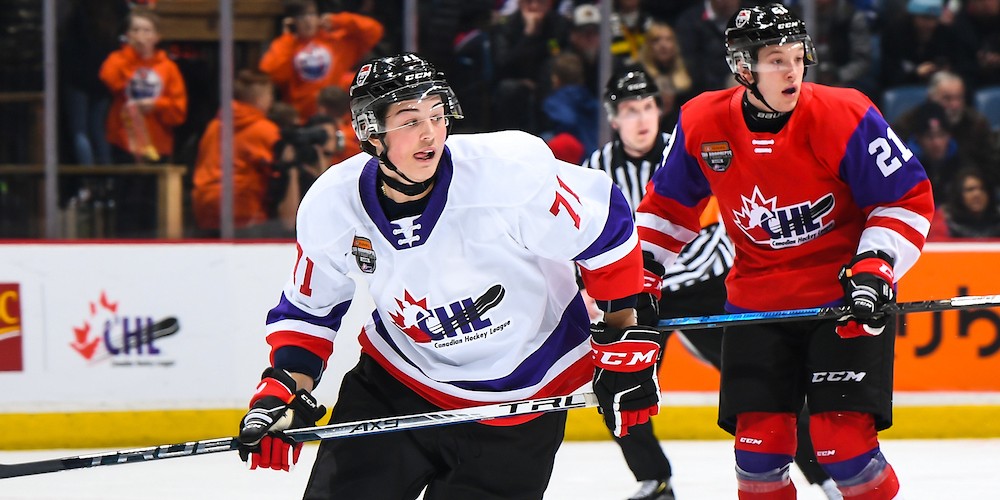 The Flyers found themselves in an optimal situation when the draft rolled around — they were Stanley Cup contenders and maintained an impressive farms system. Yes, there have been several NHL graduations that thinned out the pool. But isn’t that what you want? Now that Joel Farabee and Philippe Myers are legit NHLers (and Morgan Frost not too far behind), however, Philadelphia’s prospect pool needed replenishing. Making it easier was that the Flyers, unlike most contenders, actually owned their first two picks, which they used on sniper Tyson Foerster and power-play specialist Emil Andrae, respectively. Foerster is a cross between Isaac Ratcliffe and Bobby Brink — a big scoring winger who can also stickhandle and create chances on his own. As for Andrae, his size (5-foot-8) doesn’t come close to offsetting the power he packs in his hits or shots. He’s an agile puck mover who is already an SHL defenseman.

The Flyers stuck with a winger theme the next three picks — all coming from Canadian major junior. Zayde Wisdom was a key piece to a lethal top line with the OHL’s Kingston Frontenacs; and both Elliot Desnoyers from Halifax in the QMJHL and WHL’er Connor McClennon provide offense with a nice mix of energy and agitation. These additions were all acceptable in my book, and undoubtedly helped keep Philadelphia’s farm system ranked in the upper half of the league.

Delivering accurate hammer blows from the flank has to be the desired result that coaches expect from their wingers, especially those who play on a top line. Foerster can execute one-timers as well as anyone, and it was refreshing to see a present-day player use the slap shot with frequency. But there’s more to his game than just scoring, albeit mostly in the coachability and intangibles departments. Remember, the Flyers already are a powerhouse team and have young centers who are more than capable of feeding pucks into Foerster’s wheelhouse.

Make that two years in a row where the Flyers drafted one of the top — if not THE top — power-play quarterback available. Although both Andrae and Flyers’ 2019 first-rounder Cam York are both lefties, there’s no reason why one cannot envision them sharing the point on what could be a lethal Flyers power play for many years to come. Again, size should not be a major concern because Andrae doesn’t put himself in many positions to get overtaken. His decision making is rapid and timely, but he also has the wheels and footwork to keep bigger forwards to the outside. Andrae is a very strong kid and plays with a lot of intensity, so it’s just a matter of time before he checks the SHL block and is ready for North America.

Wisdom as an easy kid to root for because he’s both smart and flashy; sometimes simultaneously. My initial impression was that he was going to benefit from being centered by 2022 draft phenom Shane Wright, but it didn’t take long for Wisdom to reveal his own abilities irrespective of what his linemates were doing. He can finish in a variety of ways, but a good chunk of his points were off of sheer hard work or thinking ahead of everyone else. My only concern with Wisdom is his skating, which is average at best. But he should be expected to put up a huge 2021 season and keep his name in the mix for an NHL contract.

Another hard worker who knows how to make things happen on his own, Desnoyers is neither big nor fast but still remains noticeable. Whether it’s creating chances off of hard work along the boards or making smart decisions in odd-man rushes, Desnoyers always seems to be a key component in whatever his line is doing during a given shift. He’s moving from a loaded Moncton team that kept his minutes limited to a rebuilding Halifax squad that could use his experience. The key for Desnoyers is to finally become the top scorer he was expected to be when he went high in the QMJHL draft.

One of the draft’s surprising developments during Day 2 was how far McClennon was falling. He may be undersized (5-foot-8, 163 pounds), but nobody can ever question his work ethic or ability to score a fair amount of dirty goals from tough areas. McClennon once was a high WHL bantam pick and he didn’t disappoint in his draft year, averaging over a point a game and being used in all situations. His season was cut short after a collarbone injury, but by that point the feisty winger already established himself as a clutch scorer — 26 of his 49 points came on goals that either tied the score or gave his Winnipeg Ice the lead. He’s always played for Team Canada at the key events so it’s not out of the question to label McClennon as a WJC hopeful in 2022.