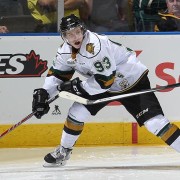 Mitch Marner
Position: Right Wing
Shoots: Right
Height/Weight: 5’11, 160 lbs
Born: May 5, 1997, Thornhill, ON
Central Scouting Rankings (Prelim/Mid/Final): ”A“/ 7th NA/ 6th NA
Summary: We may never know if choosing Marner was simply a consequence of center Dylan Strome being selected by Arizona a pick earlier rather than the player they wanted all along. Regardless, they wound up with who we feel is the better and far more dynamic player despite the aforementioned Strome edging our Marner for the OHL scoring crown on the last day of the season. Marner’s 126 points in 63 games is a staggering figure nonetheless, and if he is going to be compared to Patrick Kane, then we should mention that Marner’s 126 points were most by a London Knight since Kane registered 145 in 2006-07. Like Kane, Marner is an exciting star player and a fierce competitor who earns the majority of his points from intelligent play and positioning. His stickhandling is off-the-charts ridiculous, and in a possession-obsessed world, he’s the draft’s best after McEichel at holding onto the puck and making plays in the face of a squad of swarming stick checkers assigned to swat it away from him. His level of play during physical battles is something to keep an eye on, and he may have a bit of an (unreported) concussion history.  He missed two weeks in late January after being hit from behind by Oshawa’s Will Petschenig, and was later forced out of the postseason with an OHL-best 16 points in seven games when an elbow to the head from Erie’s Mason Marchment ended his season. Speculation or not, the bottom line is he was knocked out of action from some pretty nasty hits and it should be a bit of a concern moving forward. 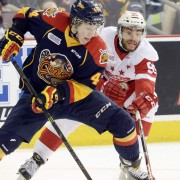 Travis Dermott
Position: Defenseman
Shoots: Left
Height/Weight: 5’11, 197 lbs
Born: December 22, 1996, Newmarket, ON
Central Scouting Rankings (Prelim/Mid/Final): ”B“/ 47th NA/ 46th NA
Summary: Solid two-way defender who was either really good, or simply lucky to play alongside some of the CHL’s most prolific forwards (more on that later).  It made little sense to us for the rebuilding Leafs (with their porous defense) to trade down from 24 and essentially throw away the chance to draft another defenseman with sizable advantages over Dermott but who would likely be gone if they ran that risk. Lo and behold, four blueliners we viewed as superior prospects — Jeremy Roy, Gabriel Carlsson, Jacob Larsson and Noah Juulsen — were all gone within the 10 picks between 24th overall and 33rd (where Dermott was selected). As good and productive a top-pairing defenseman Dermott is, we view him as a bit of a redundant draft prospect who clearly benefitted from playing with Connor McDavid. And when we say “…with Connor McDavid”, we’re not merely screwing around with words. For example, of the 17 points he scored in the postseason, 12 directly involved McDavid, and two more (one an empty netter) were when McDavid was on the ice. Contrary to some scouting reports, we identified some serious cracks in Dermott’s ability to defend one-on-one, time his step-ups accordingly and cover the slot with authority. And while his elite-level passing skills can be considered to make up for his defensive shortcomings, we think the Leafs could have done better with what was once the 24th overall pick. 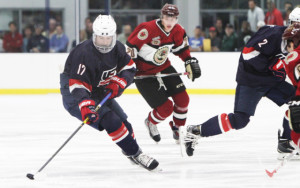 Jeremy Bracco
Position: Right Wing
Shoots: Right
Height/Weight: 5’10, 170 lbs
Born: March 17, 1997, Freeport, New York
Central Scouting Rankings (Prelim/Mid/Final): “B” / 36th NA / 60th NA
Summary: As much as we dinged Shanahan for trading down from the 24th overall pick to nab Travis Dermott at 33rd overall, we absolutely love the additional part of that deal which turned into a guy we pegged as a first rounder. An exceptional offensive wizard blessed with an off-the-charts IQ and considerably more creativity than most in his draft class, Bracco is always noticeable when he’s on the ice. In a weaker draft year, Bracco would likely be a top-10 pick, especially since general managers’ needs are trending toward skill and smarts over size and physicality. He is a tireless worker with enough grittiness and compete level equal to the Barzal/Marner/Merkley class of undersized playmakers, as are his vision, patience and puck control. Bracco has a very good wrist shot and he seems to favor it, but he can release a hard, accurate backhand. He can also elevate the puck from in close, whether shooting from at or near is feet or overextended. These offensive tools serve him well in the battlefields below the circles, where real estate is at a premium and provides little solace for the unskilled. Bracco’s also developed a nice big game reputation, adding benchmark events to his resume while playing for the United States National Team Development Program. Bracco has repeatedly shown up in key matches on the international stage, regardless of whether he drew top matchups or was relegated to second line duty. He is a very good skater with breakaway speed; extremely elusive and shifty in the offensive zone; enough to slip through or around defenders with superior puckhandling and puck protection. 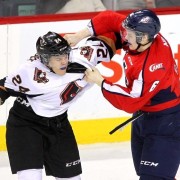 Andrew Nielsen
Position: Defenseman
Shoots: Right
Height/Weight: 6’3, 207 lbs
Born: November 13, 1996, Red Deer, AB
Central Scouting Rankings (Prelim/Mid/Final): NR/ 69th NA/ 52nd NA
Summary:  Meat-and-potatoes defenseman who can physically wear opponents down. We like this pick because it at least shows Shanahan and Dubas realized how poor a state the team defense is in from both a farm system and parent club standpoint. Nielsen had the misfortune of playing solid and reliable defensive hockey on a team who stunk up the joint from wire to wire. And though he can play a bit undisciplined at times, he gets a bit of a pass considering he was a rookie and was thrust into critical on-ice situations which at times seemed indefensible. All Leafs fans can hope for is that he develops into the kind of defender who doesn’t get caught out of position too often, and uses his physicality to eliminate plays rather than exacerbate chances against. 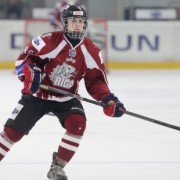 Martins Dzierkals
Position: Left Wing
Shoots: Left
Height/Weight: 5’11, 169 lbs
Born: April 4, 1997, Latvia
Central Scouting Rankings (Prelim/Mid/Final): NR/ NR/ NR
Summary: Speedy Latvian puck magnet with a variety of offensive skills but has to be considered a high-risk pick simply because he was taken way off the board at 68th overall — the final pick acquired from trading down from 24th. And while he wasn’t necessarily an obscure prospect thanks to a dominant individual U18 and some serious MHL production for Riga (28 points in 32 games), he hasn’t proven to be able to do anything but provide offense. With the Leafs quickly building an arsenal of one-way skill forwards, a lot of these kids will eventually get blocked by attrition and try to reinvent themselves into the kind of depth players they physically (and mentally) don’t want to become. Again, it all ties in to the kind of rebuild Brendan Shanahan wants to run, and Dzierkals leaving the MHL for the QMJHL in 2015-16 may help make it go a little quicker. Still, trading the 24th overall pick for what turned out to be Travis Dermott, Jeremy Bracco and Dzierkals may not go down too well when all is said and done. 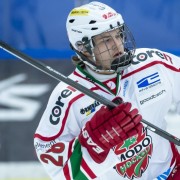 Jesper Lindgren
Position: Defenseman
Shoots: Right
Height/Weight: 5’11, 161 lbs
Born: May 19, 1997, Umea, Sweden
Central Scouting Rankings (Prelim/Mid/Final): ”B“/ 15th Eur/ 19th Eur
Summary: Paper-thin mobile defender who is a good value pick up in the fourth round because he can be very confident and quick up the ice. It’s highly plausible that a poor Five Nations tournament and a bland U18 hurt his draft stock, as Lindgren was once considered a possible second rounder. We think the upside is worth the gamble, as he makes an outstanding first pass and possesses the kind of instincts where he will quickly identify a gap and either dart right for it, or split it with an accurate dish. Like most Swedish-trained defensemen, he’s been schooled to be quick with his breakouts, so at times you wish he could settle the play down and adjust the pace of the game. In our view, he should stay in the SHL for several seasons in order to build enough muscle to physically sustain the rigors of the North American game. 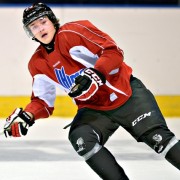 Dmytro Timashov
Position: Left Wing
Shoots: Left
Height/Weight: 5’9, 192 lbs
Born: October 1, 1996, Kirovograd, Ukraine
Central Scouting Rankings (Prelim/Mid/Final): ”C“/ 58th NA/ 92nd NA
Summary: Normally we’d be happy with the late selection of a dynamic yet undersized forward with puck-hounding traits (and QMJHL Rookie of the Year to boot). But the Leafs used six of their first seven picks on undersized players who will need to improve their strength or struggle with the physical nature of the game (it’s not going away, folks). Does Timashov provide you with off-the-charts vision and skill? Absolutely. But so do Marner, Bracco, and Dzierkals — four players (including Timashov) with almost identical skill sets. We feel this draft tactic is an attritional line of thinking — if you draft (for example) all skill forwards and at least one is bound to become a star, you’re particular draft year is absolved if the rest are failures. Playing Devil’s Advocate, using undersized skilled forwards has been the Detroit Red Wings way of doing business for a few decades, so Shanahan and Babcock are clearly trying to copy a model that has worked before.  We really like Timashov as an NHL prospect but don’t be surprised is he’s eventually buried on a depth chart after the redundancy of his type outweighs the depth justification. 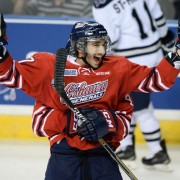 Stephen Desrocher
Position: Defenseman
Shoots: Left
Height/Weight: 6’4, 198 lbs
Born: January 26, 1996, Toronto, ON
Central Scouting Rankings (Prelim/Mid/Final): NR/ 181st NA/ 145th NA
Summary: Desrocher is the perfect example of a kid who turned a negative into a big, rewarding positive. Passed over in the 2014 draft, he reported to Oshawa in tremendous shape and had a strong first half before settling into his role as the Generals’ go-to situational guy. Desrocher eventually worked himself up to the top pairing for the entirety of the OHL playoffs, but it was at the Memorial Cup (2 goals, one assist) where he displayed his ability to make big plays at the right time while providing reliability from the back end. He can play the point of the power play and be a top-pairing option for the penalty kill thanks to his size and smart positioning. 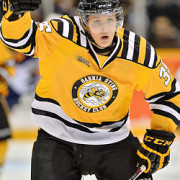 Nikita Korostelev
Position: Right Wing
Shoots: Right
Height/Weight: 6’1, 195 lbs
Born: February 8, 1997, Moscow, Russia
Central Scouting Rankings (Prelim/Mid/Final): ”B“/ 41st NA/ 50th NA
Summary: Something’s usually rotten in Denmark if a prospect universally pegged as a second rounder falls all the way to the seventh. And while popular opinion seemingly leans towards his average skating ability and defensive-zone irresponsibility as drivers for his meteoric descent, we’d like to think there’s probably more to it. Especially since far more successful teams with far less depth in skilled wingers took slower, less-skilled players before him. We viewed Korostelev — Pavel Zacha’s Sarnia linemate — as a pure sniper with a heck of a shot who dealt with some consistency issues on a pretty thin team. Whether or not he succumbed to lofty expectations should not have warranted a cliff dive on the draft board. As cliche as it sounds, this has to be considered a steal. At least for now.