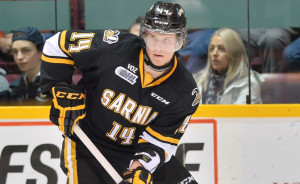 Pavel Zacha
Position: Center
Shoots: Left
Height/Weight: 6’3, 210 lbs
Born: April 6, 1997, Brno, Czech Republic
Central Scouting Rankings (Prelim/Mid/Final):  “A” / 8th NA / 8th NA
Summary: Like most draft pundits before the draft, we got the impression that the offensively-challenged Devils were going to grab a center with their first pick. The question was whether it was going to be Zacha or Matt Barzal — who are about as different as they come in terms of skill sets. In choosing the multi-talented Zacha, New Jersey now owns the kind of complete package from the center ice position it hadn’t possessed since Kirk Muller nearly 30 years prior. A strong center with a variety ways to beat you, Zacha’s at his best when he’s unbridled in open ice and exploding up the ice as if he was shot out of a howitzer. He’s a devastating hitter who toes that line between acceptable and dirty. His physicality coupled with his speed are reasons why the seas in the offensive zone seem to part whenever he has the puck. Zacha possesses an excellent shot and an even better release, and his one-timer is devastatingly accurate. He is very good at exiting his own end and entering the other. While he shouldn’t be categorized as a selfish player, Zacha tends to hold onto the puck longer than he should. Chalk it up to youth and overconfidence. Regardless, he’s built to sustain the rigors of the NHL almost immediately.

Mackenzie Blackwood
Position: Goaltender
Catches: Left
Height/Weight: 6’4, 215 lbs
Born: December 9, 1996, Thunder Bay, ON
Central Scouting Rankings (Prelim/Mid/Final): “B”/ 1st NA/ 1st NA
Summary: It’s funny how everybody talks about the importance of goaltending even after the trend has been to draft them after the first round. Blackwood, who was the consensus top netminder available in the 2015 draft, was very much a first-round, possibly lottery-type talent. And while some may say the Devils are set in goal with a Vezina-caliber minute muncher in Cory Schneider, the farm system was bereft of a future star between the pipes. We feel this is a tremendous pick by general manager Ray Shero and staff, who drafted the netminder with not only the shortest path to the NHL, but also its most technically advanced. Blackwood is a butterfly-style goalie who likes to challenge shooters and is extremely quick on his feet. His rebound control is very good for a teenager, and though his puck handling is pretty average, his ability to read plays and communicate with his defensemen make up for his lack of wrist strength and a somewhat average aggressiveness on dump ins. In terms of puck retrieval and head manning, Devils fans should not expect him to be a sort of third defensemen the way Martin Brodeur was. Nevertheless, Blackwood is certainly an imposing figure in the crease, and his ability to cut down angles by playing outside the blue paint while possessing a quick glove/blocker makes him less susceptible from getting beat up high. From a developmental standpoint, we think his quickness and reaction time are fine, but he’s yet to perfect his butterfly and standing upright as much as he does can make him vulnerable to five hole shots and down-low deflections, especially on the penalty kill.

Blake Speers
Position: Center
Shoots: Right
Height/Weight: 5’11, 181 lbs
Born: January 2, 1997, Sault Ste. Marie, ON
Central Scouting Rankings (Prelim/Mid/Final): “C”/ 44th NA/ 49th NA
Summary: The 2015 Greyhounds were somewhat like the dynasty New York Yankees of the late 1990’s in that there was no singular star or MVP you could point to, but a handful from the roster would be the clear-cut best player on most other teams. Their team-first concept didn’t get them to a Memorial Cup or even an OHL title, but it’s hard not to appreciate the sacrifice talented players like Blake Speers made to buy into Sheldon Keefe’s system. He’s primarily an two-way center who can make creative plays thanks to his speed and thinking-man’s approach. His instincts are excellent, and he can sniff out and interdict a lazy cross ice pass with the best of them. The disc always seems to find him, and when he gets it, he’s extremely elusive, shifty and strong on the puck. He can also play the wing, and coupling his strong and accurate shot with is vision makes him perfect for receiving and setting up one-timers on the power play. Speers can get pushed around away from the puck, so getting and playing stronger are areas he can work on for next season. Top-6 upside for sure.

Colton White
Position: Defenseman
Shoots: Left
Height/Weight: 6’0, 182 lbs
Born: May 3, 1997, London, ON
Central Scouting Rankings (Prelim/Mid/Final): NR/ 154th NA/ 128th NA
Summary: Super-dependable stay-at-home defensemen for the Soo Greyhounds who didn’t stay at home becasue he wanted to. He stepped up his offense for coach Sheldon Keefe when defensemen Darnell Nurse, Tyler Ganly and Tyler Hore were out, and we believe there is some untapped offensive potential there. White has very good instincts in his own end, and his step-ups are calculated and timely. But when you consider how good a skater he his, it’s a shame he wasn’t pressed to take risks going the other way. This apprehension will have to be coached out of him, and with the aforementioned rearguards (and star Anthony D’Angelo) likely graduating to higher levels, you should expect a boost in ice time and production from both White and third-pairing partner Gustav Bouramman.

Brett Seney
Position: Center/Wing
Shoots: Left
Height/Weight: 5’9, 176 lbs
Born: February 28, 1996, London, ON
Central Scouting Rankings (Prelim/Mid/Final): NR/ 141st NA/ 198th NA
Summary: For a while, it seemed like Seney was Hockey East’s “other” freshman forward sensation whose successful rookie campaign tended to get overlooked by a kid named Jack Eichel. If it’s any consolation for Devils’ fans, it took a historic season from Eichel to divert attention away from the overage Seney, who is arguably the fastest skater in the circuit but saw both his production and draft stock fall after he suffered a pair of lower-body injuries in a three-week period last winter. Seney, who last season played all three forward positions but was primarily a 2C, was at one point tied for the NCAA freshman lead in goal scoring with an astounding 10 goals on 41 shots. He’s an exceptionally gifted playmaker and finisher, but like most undersized forwards does not play a “strong” game and gets knocked off the puck quite easily. For now, he’s shifty enough to let it go unnoticed but bulking up and working on his balance should be his offseason focus for the next few seasons.