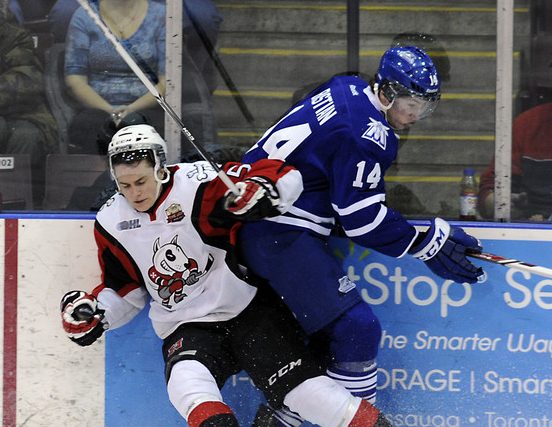 If your team has an abundance of skill players, chances are they’re going to require somebody to get deep into trenches for chest-to-chest warfare, which is why a hard-charging, two-way forward like Bastian is so highly regarded. A versatile big man who can play any of the three forward positions, Bastian played alongside Mike McLeod and Alex Nylander for large chunks of the regular season, using physicality, net presence and constant hustle to make life easier for his linemates and allow them to do what they do best. He stands a whopping 6’4 and weighs in at 205, which is scary to think when assessing 18 year olds. Bastian won’t wow you with any particular skill, but he’s great to have both in the room and on the ice. He is a patient player who pounces on mistakes, and can fire off a heavy shot that will beat goalies from distances beyond the tops of the circles. Bastian isn’t fast but will win his share of 50/50 battles and on occasion can barrel past a defender in a one-on-one scenario. When he played the pivot, he won 46 percent of his draws and was used on both the power play and on the penalty kill with some success.