Potsdam, NY (The Draft Analyst) — A.J. Fossen and Pat Megganety each had three point nights as the Clarkson Golden Knights completed a weekend sweep of the visiting Western Michigan Broncos with a 6-2 victory on Saturday at Cheel Arena. Fossen erased an early 1-0 deficit with a power play goal at 5:40 of the first period and drew a primary assist in James de Hass’s go-head tally with only one second left in the opening frame. Megannety helped Clarkson build a comfortable lead with an assist on Christian Powers’  eventual game-winning goal at 5:25 of the second, and both he and Fossen scored during a five-minute power play just over 10 minutes later to give the Golden Knights a commanding 5-1 lead after 40 minutes. Marly Quince capped the scoring, and goalie Steve Perry made 25 saves to pick up the win for Clarkson, which improved to 6-1-0 on the season. Kyle Novak and Sheldon Dries potted goals for Western Michigan, which fell to 2-3-1. Jade McMullen was handed a five-minute major and a game misconduct for hitting Clarkson captain Paul Geiger from behind in the second period. 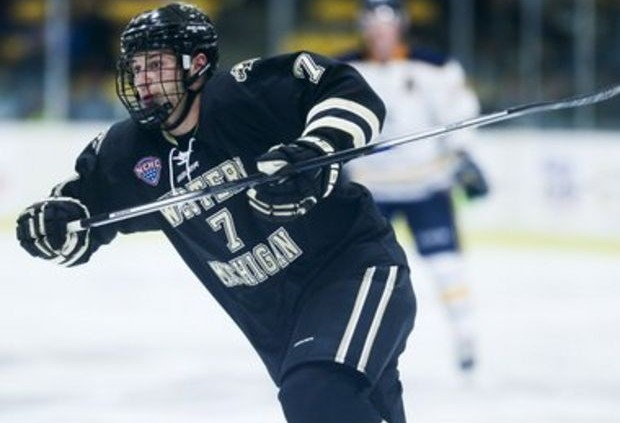 17 – LW GRIFFEN MOLINO (UDFA/1994) Played on flank of Broncos’ fourth line centered by C FREDERIK TIFFELS (PIT 6th/2015). Plays a high-energy game but looked to be thinking before executing. Had several patient zone entries and topped them off with accurate passes to create chances. He also played with an edge; he finished his checks and was very decisive when he chose to use the body. Molino is Trenton, Michigan native who led a talented Muskegon (USHL) squad in scoring in 2014-15 with 18 goals and 46 assists in 57 games. A true freshman, he stands 6’0 and weighs 185 pounds.

19 – C FREDERIK TIFFELS (PIT 6th/2015) Penguins draft pick centered the Broncos’ fourth line and was pretty quiet for two periods. He seemed to always know hwere to be from a defensive standpoint, but it wasn’t until the later stages of the game where he took chances and carried the puck with confidence. He did an excellent job of settling the play down in his own end after a lengthy Golden Knights’ possession, and rather than just throw the puck up the ice for a quick change, he generated a quality chance off a en end-to-end rush. Tiffels did not display the kind of offensive skills you’d expect from  one of the only four players Pittsburgh drafted last year. But considering how bad the Broncos were offensively, he was one of the few who stood out.

6 – LHD COREY SCHUENEMAN (UDFA/1995) Like Molino, the 6’0, 200-pound Schueneman (1995) was a standout for the Lumberjacks in 2014-15, finishing second among all USHL defensemen in scoring with 16 goals and 46 points. Against Clarkson, however, he looked like a freshman who had little confidence in his abilities to impact the game from an offensive standpoint while playing the right side on the second pairing. Neither his set-ups or breakout passes were accurate or done with authority, yet it was his play in the defensive end (active stick, good gap control) which almost made up for the aforementioned shortcomings. We’ll chalk it up to having an off night, especially since all out previous viewings revealed a very talented kid with a hard, accurate shot.

7 – LW MATHESON IACOPELLI (CHI 3RD/2014) A freshman power forward with very good strength and good balance, Iacopelli was one of the few Broncos who was able to create time and space and involve himself in cycles which generated chances. He owns a ridiculously powerful shot — literally one of the best, if not the best among collegians. 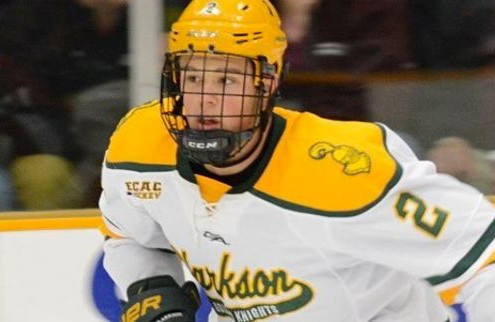 2 – LHD JAMES DE HAAS (DET 6th/2012) De Haas, a Junior, had an impressive showing controlling possession and refusing to buckle under the weight of a pretty hectic Broncos forecheck. Most of his plays could not be telegraphed, and he always delivered his passes with authority. He also owns a pretty long stride, which he used to skate up the ice with confidence. On one occasion, he took charge of a period of ragged play by twirling away two forecheckers before heading up the ice and feathering a pass at the blue line for a successful zone entry. De Haas has a pretty good shot but his most noticeable asset was the accuracy of his passes. If we were to nitpick anything about his overall solid game, it would be his failure to angle off his man on two separate 50/50 battles.

21 – C SAM VIGNEAULT (UDFA/1995) was the Golden Knights’ best pivot against Western Michigan, dishing out a pair of assists, and doing a good job on faceoffs and in defensive zone coverage. Vigneault’s a big body (6’5, 194 pounds) who looks to pass first, but he also showed some nerve taking the puck directly to the cage while using his size to ward off defenders. A 12th round pick (217th overall) of the Drafted 2012, Shawinigan Cataractes in the 2012 QMJHL Entry Draft, the Sophomore is a second line center who was flawless on his zone entries on the man advantage; either using the wall with effective dump-ins or shifting direction after entry to ward off pressure. He has points in six of seven games this season (2g, 5a in 6 gp) and has won 56% of his draws.

5 – RHD KELLY SUMMERS (OTT 7th/2014) Summers is Carkson’s top-pairing blueliner who is used in every situation, including manning the point on its primary power play unit. He is not a classic puck-moving defenseman, but he does involve himself in the offense quite a bit. Summers was firing pucks without hesitation throughout the game, which made his intentions to sneak below the circles difficult to predict. He wasn’t as accurate with his passes as de Haas was, and he did play a far safer game than we anticipated. Nevertheless, he’s only a Sophomore and has plenty of time to develop into one of the better defender in the ECAC.

19 – C BRETT GERVAIS (UDFA/1994) Gervais centered Clarkson’s top line while flanked by LW JORDAN BOUCHER (UDFA) and RW NIC PIEROG (UDFA), which generated a few chances but not until later in the game. Still, Gervais is an excellent offensive player with top-end speed and very good playmaking ability. He was also used in multiple situations and also showed the ability to block shots properly rather than risk taking himself out of the play.