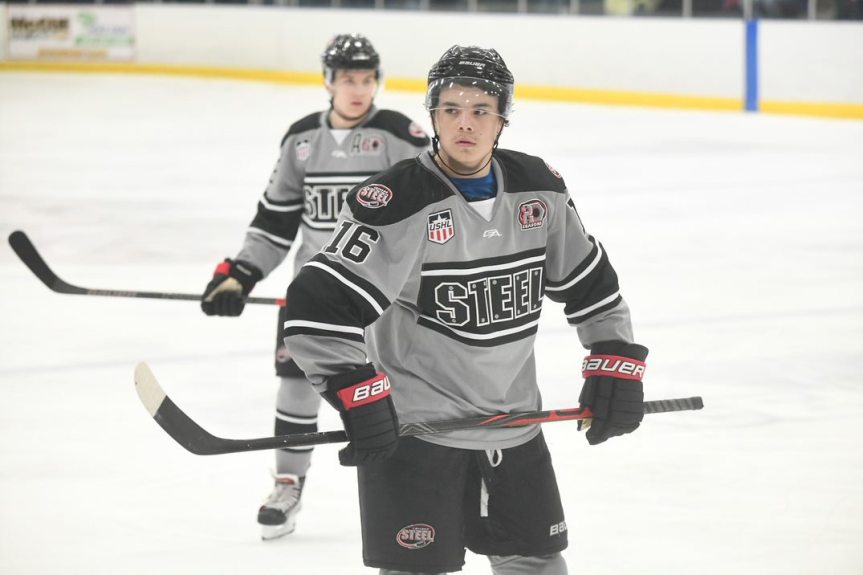 A powerful winger with dual-threat capability, Colangelo was one of the top scorers in the USHL while playing alongside a host of skilled prospects on the Chicago Steel. Committed to Northeastern, Colangelo led the league in points per game (1.32) and was second among shooters with over 125 shots with a 22.2 shooting percentage. He was third in points (58) and tied for third in goals (28). Of his 58 points, only 10 came on the power play. He represented the U.S. at the 2018 Ivan Hlinka Tournament (2 goals in 5 games) and 2019 World Jr. “A” Challenge (1 goal, 1 assist in 5 games).

Colangelo is one of the top draft prospects from the USHL. He is incredibly strong for his age and has been for quite some time. Opposing defenders of all sizes have difficulty handling him in front of the net or during board battles, and his quickness and sharp anticipation allows him to beat them to openings with frequency.

Colangelo is a power winger, one who can bring a heavy shot to bear but also capable of dropping that shoulder and keeping his balance edges as he drives the net for a closer look. But there’s more to his game than just brute strength. Colangelo is an inside player who can stickhandle, dangle, or toe-drag his way into a prime scoring area. He also has very good vision when both static or in full flight, and he’ll peel back to connect with cutters or trailers. Colangelo is a selfless and team-oriented player willing to mix it up or use his physicality to shift momentum. His skating is now a strength, and it’s surprising to see such a thick forward consistently up ice with a numbers advantage.

Colangelo may be the first U.S.-born winger taken in June. He displays an impressive blend of power, skill, and hockey sense, and his size does not hide his creativity and vision. At the WJAC while playing on an all-Steel line with center Brendan Brisson and left-wing Sean Farrell, Colangelo was critical in setting up scoring chances by patrolling the neutral zone and pouncing on loose pucks. Colangelo is a nimble skater for his size and a confident kid, especially when he’s on the puck in the offensive zone.