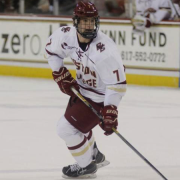 Noah Hanifin
Position: Defenseman
Shoots: Left
Height/Weight: 6’3, 203 lbs
Born: January 25, 1997, Norwood, MA
Central Scouting Rankings (Prelim/Mid/Final): ”A“/ 3rd NA/ 3rd NA
Summary: When you look at Hanifin from a purely individual standpoint, he’s top notch in so many areas. He is a tremendous skater forward and back, and possesses a long reach. This makes him difficult to beat one-on-one or in odd-man situations. Thus, his gap control is impeccable for anyone, let alone a teenager, and rarely does he resort to hooks and grabs. What makes him dangerous is when he takes these shutdown abilities and combines it with his superior IQ; at the blink of an eye, he’s stripped the puck clean and transitions the other way. Hanifin is a hard and accurate passer, especially across/up the ice, but he is also adept at beating pressure with a simple chip or ladle. He’s got great hands for a guy his size, specifically on the power play when he’s receiving hard cross-ice passes on either his backhand or forehand. He has an average shot, but it’s accurate and keeps it low. From a physical standpoint, Hanifin is big, but his physical play is part of a process rather than a reaction.

Sebastian Aho
Position: Right Wing
Shoots: Left
Height/Weight: 5’11, 172
Born: July 26, 1997, Oulu, Finland
Central Scouting Rankings (Prelim/Mid/Final): “B”/ 16th Eur/ 18th Eur
Summary: A tireless worker who creates chances off the forecheck and can both take it and dish it out. Aho is agile and his endurance while playing at high speeds is exceptional.

Nicolas Roy
Position: Center
Shoots: Right
Height/Weight: 6’4, 195
Born: February 5, 1997, Amos, QC
Central Scouting Rankings (Prelim/Mid/Final): “A”/ 25th NA/ 45th NA
Summary: He won’t become the dominant top center the Canes are looking for, but Roy is an intelligent playmaker with size and awareness. His strong U18 helped revive his stock after being once considered a first round option. He can kill penalties and won over 53 percent of his draws.

David Cotton
Position: Center
Shoots: Left
Height/Weight: 6’2, 200
Born: July 9, 1997, Parker, TX
Central Scouting Rankings (Prelim/Mid/Final): “C”/ 75th NA/ 62nd NA
Summary: Texas-born center who is headed to Boston College in the Fall. Has size and smarts but needs to fine tune his compete level. Cotton skates extremely well for a power center, and his ability to snap off shots off the rush makes you think he might be better off on the wing. He’s such a good playmaker, however, that you don’t want to mess with his development into a possible top-end pivot. By the time BC coach Jerry York is done with him he’ll be a complete player regardless.

Steven Lorentz
Position: Center/Left Wing
Shoots: Left
Height/Weight: 6’3, 191
Born:  April 13, 1996 Kitchener, ON
Central Scouting Rankings (Prelim/Mid/Final): NR/ NR/ NR
Summary: Peterborough’s versatile forward spent most of the season as a Top-6 winger but can also moonlight as a center. He went undrafted a year ago, so the spike in production was good to see. Was a 12th round pick in the OHL draft so his hard work and subsequent improvement bodes well for the Canes, who lack two-way forwards from an organizational standpoint.