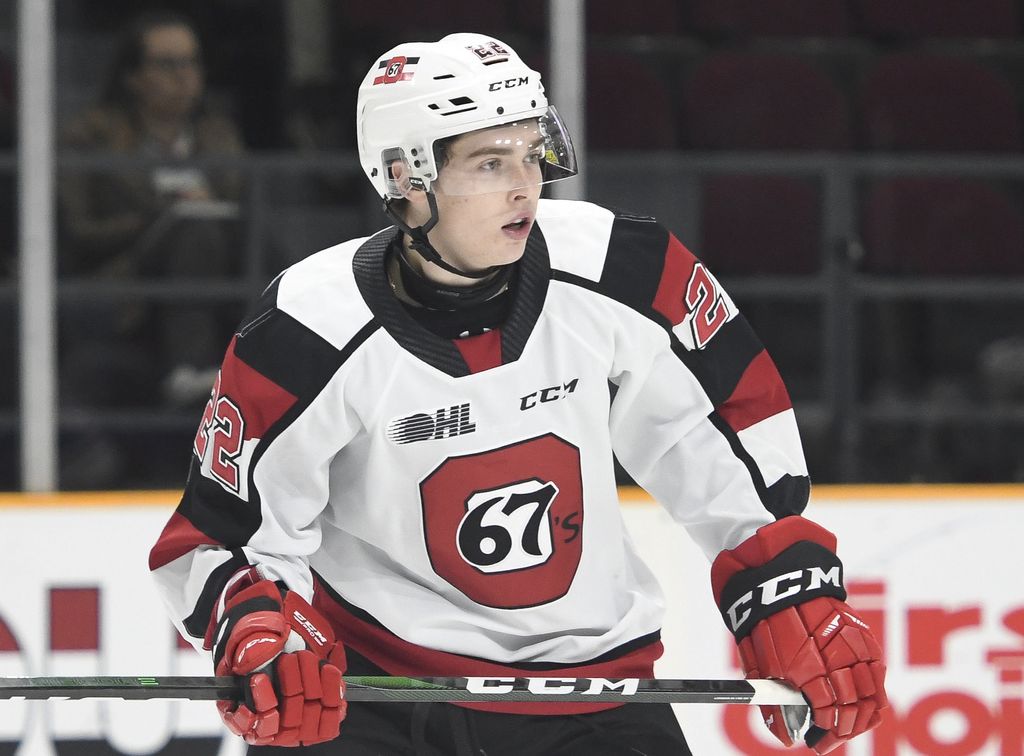 Speed, skill, and excitability were features the Sabres and their revamped front office appeared to require from their 2020 draft picks, and they went for the gusto with each of their five selections — none being listed over six feet tall. But the size of a prospect ends up becoming just a footnote as long as they progress accordingly. Therefore, giving new general manager Kevyn Adams and his scouts a pat on the back wouldn’t be premature. Some felt that sniper Jack Quinn (pictured) at eighth overall was a bit of a reach, but one must consider that the four notable wingers ranked ahead of him by the consensus — Alexis Lafreniere, Tim Stutzle, Lucas Raymond and Alexander Holtz — were already off the board. It’s also reasonable to deduce that the Sabres drafting Quinn over eventual 10th pick Cole Perfetti had more to do with quickness than anything else, although Quinn did score 15 more goals than his OHL peer.

Buffalo also snagged first-round quality in Round 2 in German speedster J.J. Peterka, and centers Matteo Costantini and Jakub Konecny play at full throttle no matter the situation. We guessed before the draft that the Sabres were going to stick with a forward theme, but the one defenseman they grabbed — speedy overager Albert Lyckasen from Sweden with the 193rd pick — has game-breaking abilities and should get a long look from Sweden when they finalize their roster for the next under-20 world junior championship.

Most of us felt the Sabres were going with a finisher, so when wingers Lucas Raymond and Alexander Holtz were taken at picks four and seven, respectively, the possibility of a finisher like Quinn or Cole Perfetti landing in Buffalo increased. The Sabres ultimately deciding on Quinn; whether it was his edge in skating or two-way play that tipped the scales in probably won’t be relevant until three or four years down the road. What does matter is that Sabres fans understand Quinn is more multi-dimensional than previous top-10 wingers Casey Mittelstadt nor Alex Nylander — if he isn’t scoring, Quinn still is making his presence felt on or off the puck and in all three zones.

It wasn’t until late in the season when I decided to swap out Lukas Reichel (17h overall) with Peterka for the draft’s best German forward not named Tim Stutzle, and I’ve been pretty clear as to why — Peterka plays like he’s shot out of a cannon and can bury a five-man unit when his elite puck skills combine with a nonstop motor. A deeper look into his game shows a young man who did not think offense all the time and was willing to pay a price while off the puck, particularly on the forecheck. Throwing his weight around from time to time and hustling on the backcheck were good signs from a dangerous scorer who in the previous season recorded 94 points in 48 games in the Czech’s premier junior league.

Playing for a program like the OJHL’s Junior Sabres certainly helped Costantini in the exposure department, but he was ranked pretty high by Central Scouting (96th in North America), so it’s not as if this pick was made specifically because of a local flavor. Costantini plays the game the right way and like Peterka, usually motors at max effort on or off the puck. He toyed with the OJHL with relative ease so expect a steeper learning curve for his follow-on career at North Dakota.

Ranked in the 180’s by yours truly a season ago, Lyckasen was an easy choice to add to my top overager list for 2020 after delivering an outstanding wire-to-wire season in Sweden’s J20 Superelit (now Nationell). He not only performed like one of the best teenage defensemen in Europe during the regular season, but Lyckasen also was the top blueliners at the under-19 Four Nations tournament last February. He’s always been known as an aggressive puck rusher  who can break out on his own, but this year you also saw a confidence and intimidation factor that helped make Lyckasen one of the top young players in all of Sweden.

NHL clubs generally avoided a somewhat deep Czech pool, but good for the Sabres for not being one of them. Konecny played every bit of the part of a top-line center, and did so for his junior and national squads. Listed at 5-foot-11 but only 156 pounds, Konecny plays a spirited game both on and off the puck. He’s been used in as many roles as one can think of for a teenage center — both special teams, top-line duties, late or close faceoffs, etc. Konecny should be considered a serious favorite to center one of the Czech’s top two lines at one of the next two world junior championships.